Automotive door latches are equipped in automobiles with lock striking operating mechanism with a latch to avoid unauthorized access. They are operated with the help of a handle which needs to tug in with applied force or be either dragged or lifted. Automotive door latches are significant tools to ensure perfect security of the vehicle by preventing severe accidents to occur by avoiding the door to open while driving on a high speed or against blowing wind.

The automotive door latch system can either be automatic or can be operated manually and is up to the user to opt for either choice. They are also activated by remote control system by assimilating the transmitter into the ignition key.

The demand for advanced technology latches such as power, LED latches etc. is anticipated to increase market share by the end of forecast period. Moreover, the development of advanced automotive door latches is estimated to grow with increasing awareness for safety concerned vehicles among consumers.CLICK TO DOWNLOAD  SAMPLE REPORT

According to a recent study conducted by Research Nester, the global market for automotive door latch is expected to grow at a moderate CAGR of 6.4% during the forecast period 2018-2027. Worldwide sales of automotive door latches are anticipated to generate USD 7,200 Million in revenue by the end of 2027. 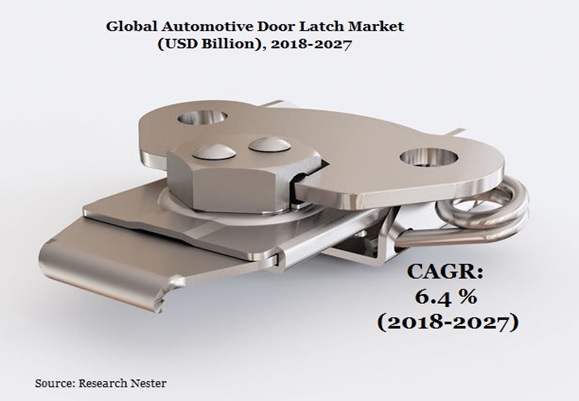 The global automotive door latch market is further classified on the basis of region as follows:

The growth of the market is driven by the rising disposable income and increasing demand for safety adapted vehicles. The demand for advanced technology latches such as power, LED latches etc. is anticipated to increase market share by the end of forecast period. With the cumulative technology advancement in automotive door latches such as smart controls via smartphone or a Bluetooth device, the leading automotive manufacturers are delivering smart lock solutions replacing the existing automotive latches.

Moreover, the demand for vehicles is expected to grow in terms of revenue. Aftermarket is anticipated to remain the largest sales channel enhancing the growth of global automotive door latch market followed by development of sales in automotive door latch in OEM during the forecast period.

Followed by its continuing progress in the recent past, the growing prominence of the side door latch segment is anticipated to be the fastest growing section of global automotive latch market resulting in rising demand for automobiles globally.

However, the advancement in technology such as remote control and LED enabled latches tangling with the controlling of vehicles might deter the growth of technology stimulated door latch market.

The global automotive door latch market is segmented as follows: