The global audiological devices market is estimated to garner a revenue of ~ USD 17197 Million by the end of 2033 by growing at a CAGR of ~6.1% over the forecast period, i.e., 2023 – 2033. Further, the market generated a revenue of ~ USD 9599 Million in the year 2022. The growth of the market can primarily be attributed to the rising prevalence of hearing disabilities across the globe. Hearing thresholds of 20dB or more in both ears is said to have earing loss. The World Health Organization has stated that 430 million people have hearing loss and require hearing rehabilitation and the number is projected to drop to 700 by 2050. 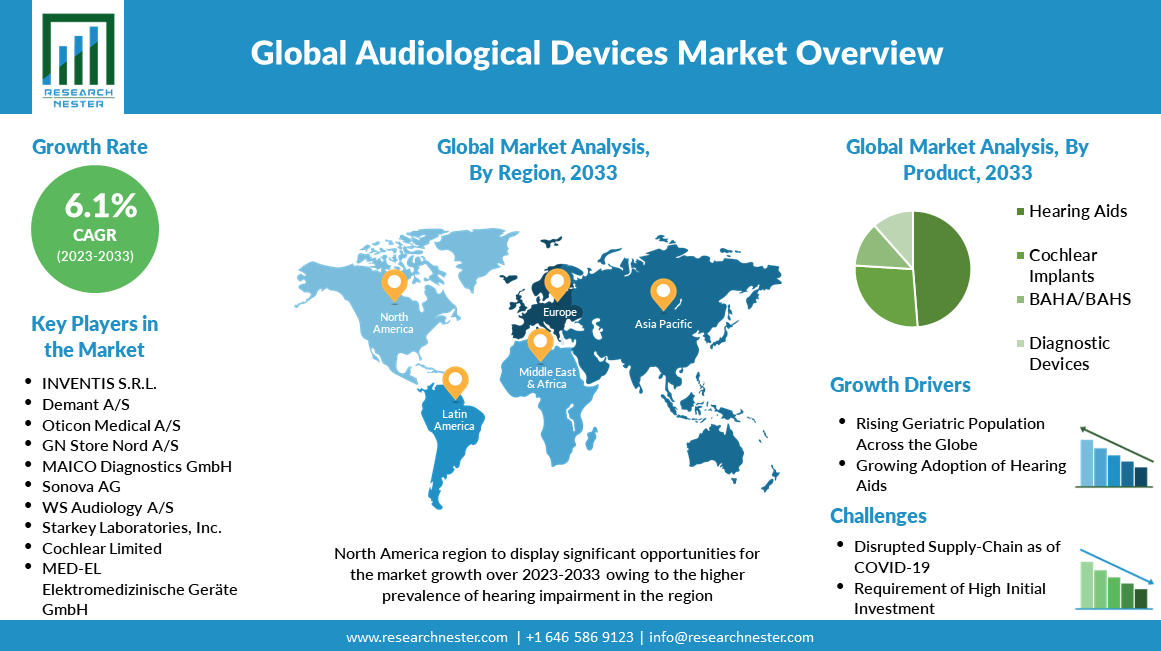 Get more information on this report:Request Sample PDF

Global audiological devices market trends such as, the rising geriatric population and increasing cases of hearing loss are projected to influence the growth of the market positively over the forecast period. For instance, by the year 2050, around 2 billion people are estimated to have some level of hearing loss while almost 34 million children are living with hearing disabilities. Furthermore, audiological devices are utilized by healthcare providers to treat people with hearing disabilities. These devices are hearing aid parts, otoscopes, earmold impressions, infection control equipment, curettes, ear wax removal systems, etc. Additionally, rising technological advancements in audiological devices have spurred the demand for them worldwide.

It is noticed that not every country manufactures audiological devices and in certain countries, the devices are imported from other nations. But as a result of COVID-19, the supply chain was broken down and the key manufacturer was at a loss. Hence, this factor is estimated to hamper the growth of the market.

The global audiological devices market is segmented and analyzed for demand and supply by product into hearing aids, diagnostic devices, BAHA/BAHS, and cochlear implants, out of which, the hearing aids segment is projected to witness a significant growth with the current highest market share of 48.73%. The growth of the segment is attributed to the better enhancement in people’s lives, technological advancement, and ease of comfort. For instance, Starkey’s Livio AI, which was launched in 2018, is the first to incorporate integrated sensors and artificial intelligence, allowing the user to monitor physical activity and cognitive performance as measured by hearing aid use.

The North America audiological devices market, amongst the market in all the other regions, is projected to hold the largest market share by the end of 2033. The growth of the market in the region is attributed to the higher prevalence of hearing impairment backed by the rising geriatric population. According to the National Institute of Deafness and Other Communication Disorders, it is noticed that 2 to 3 out of 1000 children are born with hearing loss in one and both ear in the USA. The prevalence is also very up-scaled in the adults of the region. As per the data published by the same source, it is stated that 37.5 (15%) million Americans aged between 18 and above have reported troubled hearing. Hence, such factors are anticipated to hike the market growth over the forecast period.

Our in-depth analysis of the global audiological devices market includes the following segments:

What are the major factors driving the growth of the audiological devices market?

What would be the CAGR of audiological devices market over the forecast period?

What are the challenges affecting the audiological devices market growth?

Significant prevalence of unsafe listening practices is estimated to challenge the market growth.

Which region will provide more business opportunities for growth of audiological devices market in future?

Who are the major players dominating the audiological devices market?

What are the segments in the audiological devices market?

The market is segmented by technology, product, age group, distribution channel, and by region.

Which segment captures the largest market size in product in the audiological devices market?

The hearing aids segment, with a current market share of 48.73% is anticipated to keep holding the largest market size by the end of 2033 and display significant growth opportunities.