Apple Sauce Market Segmentation By Product (Conventional and Organic); By Composition (Sweetened, Unsweetened and Flavoured); By Packaging (Cups, Pouches, Jars, Cans and Others); By Application (Food & Beverage, Confectionary, Bakery, Baby Food and Others); By End User (Residential and Commercial) and By Distribution Channel (Online and Offline) - Global Industry Demand Analysis and Opportunity Assessment 2019-2028

The global apple sauce market is segmented by regions into North America, Latin America, Europe, Asia Pacific, Middle East and Africa. Among these regions, the market in North America registered the largest share of 32.58% along with a value of USD 486.20 million in the year 2019 and is further anticipated to reach a value of USD 661.68 million by the end of 2028 by growing at a CAGR of 3.67% during the forecast period. Factors such as the increasing disposable income, healthy eating habits, changing customer preferences and others are anticipated to drive the growth of the apple sauce market in North America. The market in the region is primarily driven by the nations such as the U.S. and Canada. U.S. is also anticipated to be the second-largest producer of apple in the world. According to the statistics by the Agricultural Marketing Resource Center, there are approximately 7,500 apple producers in the country, producing about 240 million bushels of apples per year. Additionally, according to the USDA, the production of organic apples has also increased in the United States. In the year 2016, an estimated 583 farms in the United States produced about 521.3 million pounds of certified organic apples. Currently, Washington is the largest producer of organic apples in the country. 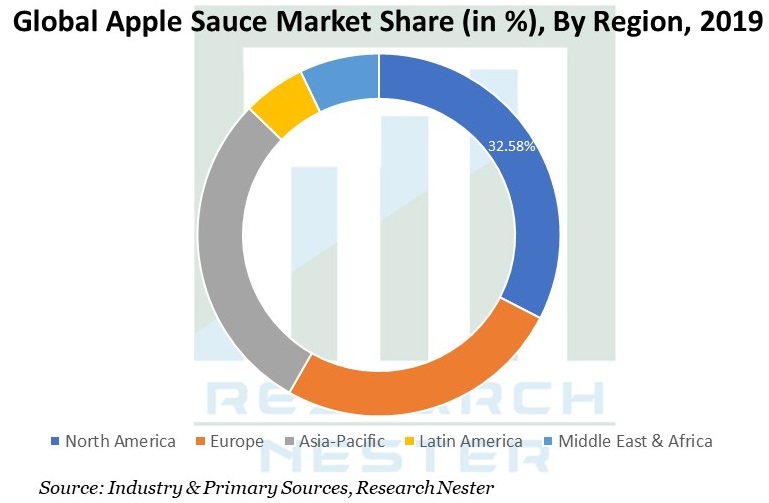 The global apple sauce market has been segmented on the basis of composition into sweetened, unsweetened and flavoured. The flavoured composition segment is further segmented into mango, strawberry, cinnamon and others. The cinnamon segment registered the largest market share of 45.12% along with a value of USD 148.89 million in the year 2019 and is further anticipated to reach a value of USD 209.77 million by the end of 2028 by growing at a CAGR of 4.07% during the forecast period. Adding cinnamon in apple sauce helps to bring out the sweetness in the sauce without added sugars. Additionally, cinnamon has various health benefits such as it reduces high blood cholesterol and reduces the risk of heart disease. Cinnamon also acts as an anti-inflammatory agent and are also rich in antioxidants. CLICK TO DOWNLOAD SAMPLE REPORT 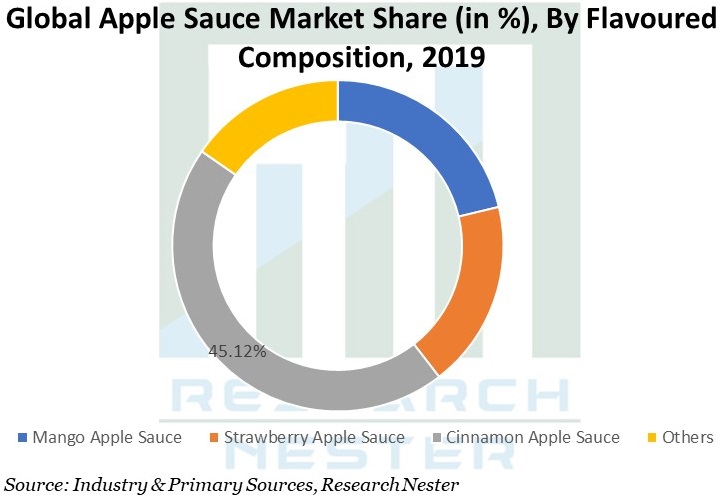 The increasing awareness among the consumers regarding the health benefits of apple consumption has boosted the uptake of apple products, such as juices, sauce, and flavoured products. Apple sauce contains high amount of vitamin C along with fiber or pectin, which is conventionally used to treat diarrhoea. Additionally, in several countries around the world, apple sauce is served as a dessert and is also widely used for baking of cakes or as a flavouring agent or as sweetener. Apple sauce possesses numerous health benefits, such as it reduces the risk of cardiovascular disease, cancer, cellular aging and further improves digestion. Moreover, the rising preferences for a healthy lifestyle is further projected to boost the consumption of apple sauce, which in turn is anticipated to drive the growth of the global apple sauce market.

According to the statistics by the USDA, fresh apple production around the globe for the year 2019-20 is anticipated to rise up to 5.0 million metric tons.

Apple cultivation is one of the most prominent agricultural practices in countries such as the US, China and India, and the food and beverage industry in these countries accounts for a considerable value share. On account of health benefits associated with fruits, players operating in the food & beverage industry are approaching for food & drinks associated with fruits, which is expected to drive the growth of the apple sauce market. Major manufacturers of apple sauce produce apple sauce products with a mixture of various other fruits to offer different flavours, enhance the taste, and provide health benefits from other fruits. For instance, vitamins and fibers are obtained from strawberries, antioxidants from raspberries, and zinc and manganese obtained from maple. The addition of flavoured apple sauce to sweetened and unsweetened apples is increasingly attracting consumers on the back of a wide range of options available in the apple sauce market. 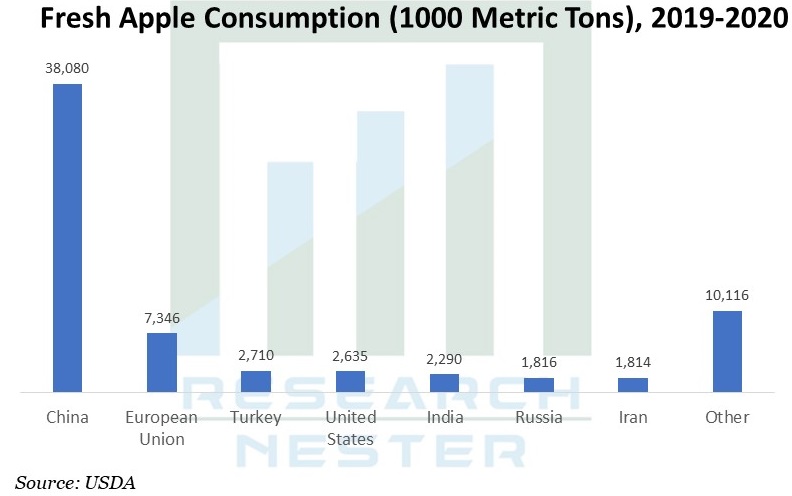 One of the significant factors anticipated to hinder the growth of the global apple sauce market is the availability of substitutes and alternative products for apple sauce. For instance, mashed bananas can be used as an alternative in baking. In addition, using it in oil or butter makes recipes a little healthier. Additionally, apple sauce can also be replaced by dairy products, such as yoghurt. Moreover, decreasing production of apples in several countries worldwide owing to the changing climate, reduced arable land and others are anticipated to lower the market growth in the coming years.

1) What are the major factors driving the growth of the Apple Sauce market?

Ans: Growing consumption of apples worldwide and the increasing consumer preferences for apple sauce are some of the major factors that are driving the growth of the market.

2) What would be the CAGR of Apple Sauce market over the forecast period?

4) Which region will provide more business opportunities for growth of Apple Sauce market in future?

Ans: The market in Asia Pacific is anticipated to display significant business opportunities in the future.

5) Who are the major players dominating the Apple Sauce market?

7) What are the major segments in the global apple sauce market?

8) What can be the significant growth opportunity for the flavoured composition segment in the apple sauce market?

Ans: The cinnamon segment, which is a sub-segment of the flavoured composition segment, held the largest market share of 45.12% in the year 2019 and is anticipated to display significant growth opportunity.

Ans: Decreasing production of apples in several countries and availability of substitutes are some of the major factors anticipated to act as a barrier towards the growth of the global apple sauce market.