Depression is one of the most commonly occurring mental health conditions among people, especially in the current times. The disorder results in a change in mood as well as the behavior of the person, causing them to feel low and unhappy. Depressive disorders can be of various types – anxiety disorder, panic disorder, obsessive compulsive disorder and major depressive disorder. These negatively impact the mental health and decrease the productivity of the person.

Depressive disorders can be treated with the help of medications known as antidepressants. These are drugs which relieve the symptoms of depression and other related disorders, and lead to an improved mental health. Antidepressant drugs rectify the chemical imbalance of neurotransmitters in the brain and aid in reducing these symptoms. 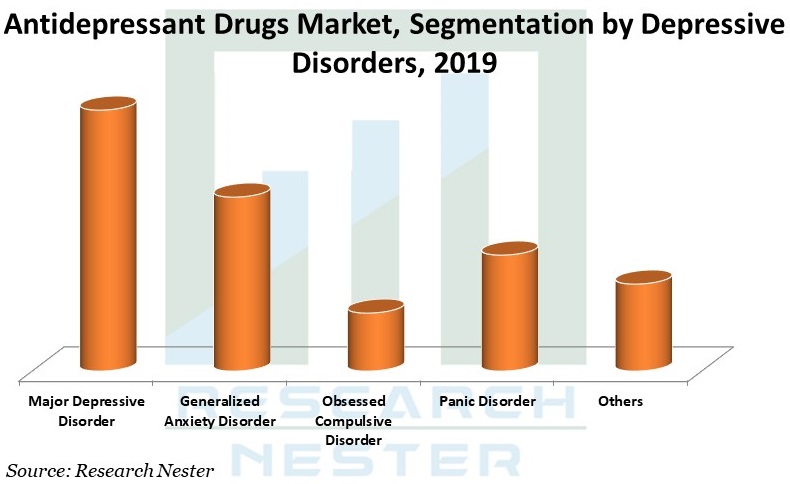 According to the World Health Organization, depression is a common disorder across the globe which affects about 264 million people globally. Depression can lead to suicide as well. Every year, around 800,000 people die due to suicide. Moreover, 76% to 85% of people living in the low and middle income countries do not receive any treatment for their mental health disorders. The growing cases of depressive disorders among people globally are predicted to increase the market growth in the coming years. In addition to this, the lack of facilities and services available in the low and middle income countries is anticipated to provide lucrative business opportunities for antidepressant drugs market during the forecast period. CLICK TO DOWNLOAD SAMPLE REPORT

As a result of changing lifestyles, people from all over the world experience stress and pressure. This impacts their mental health and might result in development of a depressive disorder. As per the 2018 statistics by Mental Health Foundation, 74% of people in the UK have felt so stressed that they felt overwhelmed or unable to cope. This is predicted to raise the demand for antidepressants as well.

Side Effects of Antidepressant Drugs to Hamper the Market Growth

Our in-depth analysis of the antidepressant drugs market includes the following segments:

The antidepressant drugs market is further classified on the basis of region as follows:

What are the major factors driving the growth of the Antidepressant Drugs market?

What would be the CAGR of Antidepressant Drugs market over the forecast period?

Which region will provide more business opportunities for growth of Antidepressant Drugs market in future?

Who are the major players dominating the Antidepressant Drugs market?