​​​​​​The global animal imaging market is estimated to garner a revenue of USD 3,606.8 Million by the end of 2031 by growing at a CAGR of 6.78% over the forecast period, i.e., 2022 - 2031. Further, the market generated a revenue of USD 1,881.8 Million in the year 2021. The growth of the market can be attributed to the increase in population of pet all around the globe. Over half a billion dogs and cats are owned by families in the U.S., Brazil, EU, and China alone, and it is believed that more than half of people worldwide have a pet at home. 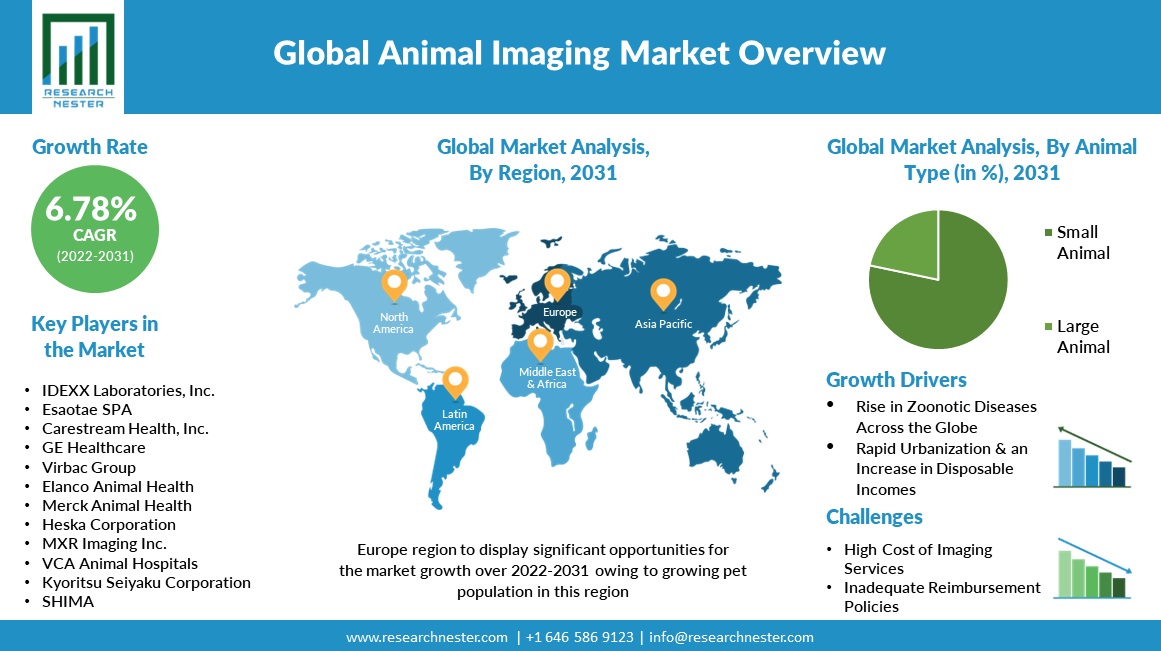 Animal imaging involves collecting images of animals in order to diagnose disease. Hence pet owners are expected to spend more on animal imaging. Further, growing expenditure on pet insurance and animal health is also expected to boost the growth of the market in the forecast period. According to the North American Pet Health Insurance Association, the adoption rate of pet health insurance in the United States is 2.3% for dogs and 0.4% for cats (NAPHIA).

The high-resolution imaging services, such ultrasound, X-rays, MRI, or CT scans, that are utilised to identify minor issues in the animals are typically very expensive. The diagnostic technology also requires large installation and operational costs, which drives up the price of services. Hence this factor is expected to hinder the growth of the market.

The global animal imaging market is segmented and analysed for demand and supply by animal type into small animal, and large animal. Out of which the small animal segment is anticipated to hold the largest revenue by the end of 2031, backed by increasing adoption of animals. Every year, almost 4.1 million animals from shelters are adopted, of whom 2 million are dogs and 2.1 million are cats. Also, to rise in spending on medication of animals in order to improve their health is also expected to boost the growth of the market. However, the large animal segment is estimated to grow with a highest CAGR of 6.81% over the forecast period.

Regionally, the global animal imaging market is studied into five major regions including North America, Europe, Asia Pacific, Latin America and Middle East & Africa region. Amongst these markets, the market in North America is projected to hold the largest market share of USD 1,239.6 Million by the end of 2031, up from a revenue of USD 660.5 Million in the year 2021. However, the market in Asia Pacific region is anticipated to grow with a highest CAGR of 7.70% during the forecast period.

Further, the market in Europe region is projected to garner the second highest revenue of USD 1,049.0 Million by the end of 2031, backed by growing pet population in this region. According to the FEDIAF data, 46% of European homes owned pets as of the end of 2021. Moreover, the Europe region is segmented into countries including UK, Germany, France, Italy, and others. Out of these countries, the market in France is anticipated to garner the largest revenue of USD 169.6 Million in the year 2031.

Our in-depth analysis of the global animal imaging market includes the following segments:

1) What are the major factors driving the growth of the animal imaging market?

Ans: The major factors driving the growth of the market are rise in zoonotic disease across the globe, rapid urbanization & an increase in disposable income, increase in number of fractures and surgeries in animals, and others.

2) What would be the CAGR of animal imaging market over the forecast period?

3) What are the challenges affecting the animal imaging market growth?

Ans: High cost of imaging services, inadequate reimbursement policies, and stringent government regulation for the use of animals in the research ane some of major factors expected to hinder the growth of the market.

4) Which region will provide more business opportunities for growth of animal imaging market in future?

Ans: The market in North America is projected to hold the largest market share by the end of 2031 and provide more business opportunities in the future.

5) Who are the major players dominating the animal imaging market?

7) What are the segments in the animal imaging market?

Ans: The market is segmented by type, animal type, and by region.

8) Which segment captures the largest market size in animal type in the animal imaging market?

Ans: The small animal segment is anticipated to garner the largest market size by the end of 2031 and display significant growth opportunities.