Global aircraft cabin interior market is expected to witness a lucrative growth in near future owing to rise in air traffic across the globe and growing trend of in-flight entertainment. In, addition to this, product innovation and increase in number of aircrafts are likely to grow need of refurbishment and maintenance in order to provide better services to the passengers. 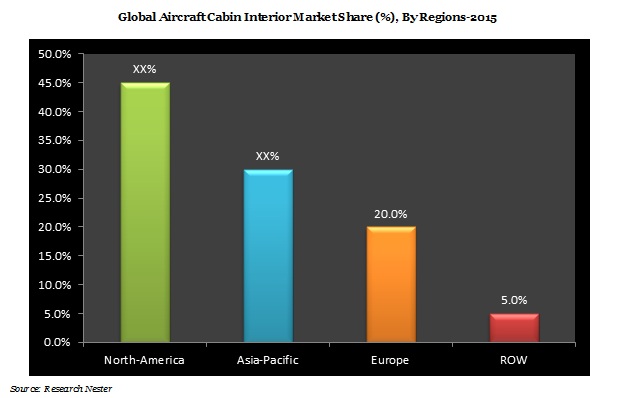 North America accounted the highest market share of 45% in terms of revenue in overall market of aircraft cabin interior across the globe. North America region is expected to continue its dominance over the forecast period i.e. 2016-2023 due to increasing air traffic and sales of commercial jet across the region. On the other hand, Asia-Pacific is expected to be the second largest share contributor across the globe in the market of aircraft cabin interior due to presence of emerging nations such as India, China, etc., rising adoption advanced technology and positive increase in GDP figure. CLICK TO DOWNLOAD FREE SAMPLE REPORT

Rapid growth in urbanization and increasing globalization are estimated to attract more passengers for flight journeys in order to save time, availability of striking and durable interiors for aircraft cabin are some of the aspects which are likely to throw a positive impact on the growth of aircraft cabin interior market in near future.  Moreover, adoption of modern and customized cabin interiors by airline companies for the convenience of passengers is predicted to get more demands from across the globe during the forecast period i.e. 2016-2023.

Global Aircraft Cabin Interior Market is further classified on the basis of region as follows:

In addition to this, factors such as intensification of air traffic, growing economies across the globe due to globalization, periodic refurbishment of interiors in order to keep the aircraft interior attractive and comfortable as well as increasing numbers of long journeys by aircrafts expected to prompt the demand for aircraft cabin interior over the forecast period i.e. 2016-2023.

The key players of aircraft cabin interior market are as follows: