The aerospace helmet mounted display is equipment used by military personnel particularly involved with aircrafts and fighter jets. These helmets display critical information such as airspeed, jet velocity and altitude of ascent or descent, and are a vital component in tactical maneuvers performed by pilots. As the technology progressed, these helmets started being used by astronauts at the International Space Station. Further, the integration with VR, AR systems and night vision is assisting the military forces across the world in fighting terrorism even on tough terrains.

The advances in technology of helmets and significance of its value added assistance in combat, space, and increase in defense spending to fight rising terrorism are the factors that can are anticipated to result in the market growth by a significant CAGR during the forecast period of 2020-2028. On the basis of technology, the market is bifurcated into VR, AR and mixed reality headsets, out of which, the highest market share is estimated to be held by VR headsets. This can be attributed to the seamless data incorporation with virtual capabilities and enhanced user experience. The market is further segmented by application into military and civilian. Among these segments, the military segment held the largest revenue generating segment in 2019 owing to the large application of mounted displays in military on ground activities and astronauts in space training simulations. Additionally, features such as night vision and thermal imaging and the value addition in enhanced warfare and tactical maneuverability further is estimated to contribute to the growth of the segment.

Technology for Centric Warfare and its Significance

In the past few decades, the world has seen many wars and the purpose of helmets was to save a soldier’s head. However, in the 21st century, advanced warfare with supersonic jets and missiles had paved a new way to deal with adversaries such as terrorism. Technologies like virtual reality, augmented reality not just enhanced warfare but also helped in saving lives. The AR and VR capabilities of the modern day helmets help the soldier to take tactical decisions and prevent loss of life. The significance of thermal imaging, night vision paired with AR, VR capabilities is huge and thus it is expected to positively impact the growth of aerospace helmet mounted display market. Moreover, the expenditure towards aircraft and missile manufacture and for training aircraft pilots is expected to drive the demand for mounted displays.

Space agencies across the world, NASA, ISRO, CNSA announced the ambitions of further exploring space and also made plans for man missions to the surface of the moon. NASA expects to complete the mission by 2023 while India’s ISRO Gaganyaan Program is expected to be finished by 2024. Chinese Space administration, CNSA recently completed successful tests for launching China’s own Space Station. These ambitious missions require intensive training for astronauts with helmet mounted displays. On the back of this, the demand for aerospace helmet mounted displays is anticipated to rise over the next few years.

The potential factor that can affect the growth of the market is the high cost associated with manufacturing costs and R&D expenditure of aerospace helmet mounted displays. 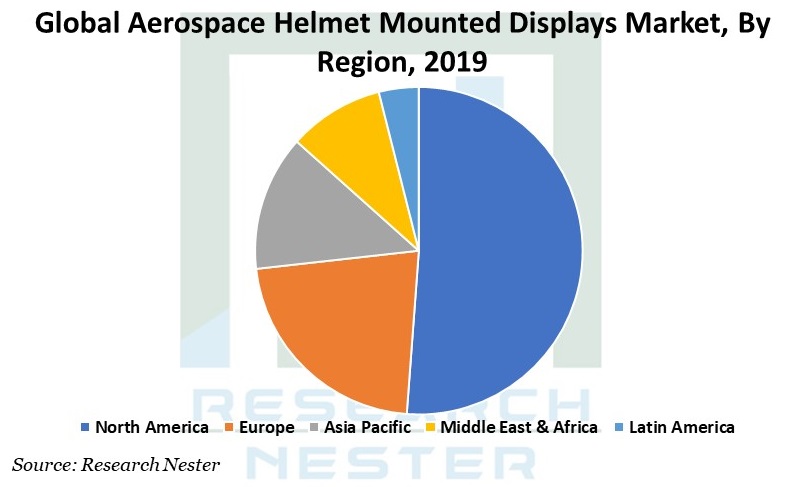 On the basis of regional analysis, the global aerospace helmet mounted display market is segmented into five major regions including North America, Europe, Asia Pacific, Latin America and Middle East & Africa region. The market in North America is anticipated to hold the largest share in the market on account of presence of leading market players in the region which manufacture and market the helmet mounted displays. High military budgets and ambitious space exploration projects further result in the largest market share of the market in North America. The market in Asia Pacific region is predicted to grow at the highest rate during the forecast period as a result of increase in defense spending and rising space budgets in countries like India, China and South Korea.

The aerospace helmet mounted display market is further classified on the basis of region as follows: