The global aerospace composites market is estimated to garner a large amount of revenue by growing at a CAGR of ~10% over the forecast period, i.e., 2022 – 2031. The growth of the market can be attributed primarily to the increasing demand for composites from the aircraft industry as a result of their high tensile strength, superior low-conductivity, and low weight. Along with these, growing replacement of aging aircrafts with new fuel-efficient ones, and rising military expenditure across the globe are also expected to drive market growth in the forthcoming years. According to the World Bank, the global military expenditure as a percentage of GDP reached a value of 2.361 percent in 2020, up from 2.186 percent and 2.147 percent in 2019 and 2018 respectively. Furthermore, growing use of carbon fibers in the aerospace industry for making high-yield and low-cost aerospace composites, coupled with the reduction in the cost of these fibers are projected to offer ample growth opportunities to the market in the near future. 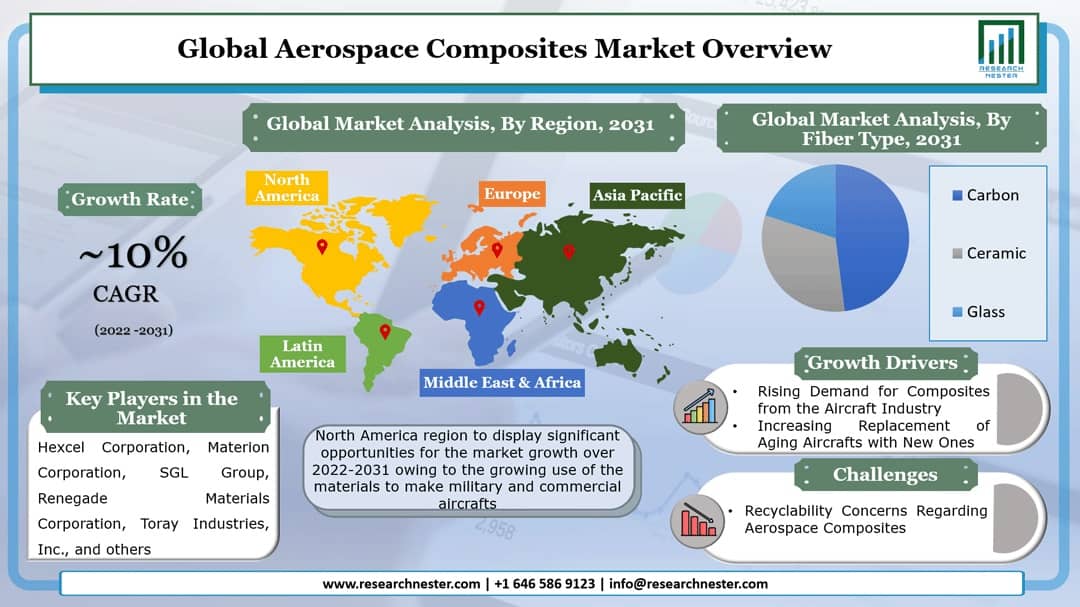 The market is segmented by aircraft type into commercial aircraft, business & general aviation, civil helicopter, and military aircraft, out of which, the military aircraft segment is anticipated to hold the largest share in the global aerospace composites market. This can be accounted to the high requirement of durable, lightweight and temperature resistant materials used for making military aircraft components. Apart from these, growing development of advanced materials that decrease the detection rate of military aircraft is also predicted to boost the growth of the market segment in the future. Additionally, on the basis of fiber type, the carbon segment is assessed to occupy the largest share during the forecast period owing to the largescale adoption of carbon fiber composites for making engine nacelles, wings, fan casings, floorboards and other applications.

Regionally, the global aerospace composites market is segmented into five major regions including North America, Europe, Asia Pacific, Latin America and the Middle East & Africa region. The market in North America is estimated to acquire the largest share over the forecast period on the back of the rising utilization of aerospace composites in the military and commercial aircraft industries. In addition, high consumption of aerospace composites, in terms of value and volume in the United States is also expected to drive market growth in the region in the coming years. Moreover, the market in Europe is also anticipated to grab a notable share, which can be credited to the largescale production and shipment of commercial aircrafts to other parts of the world, and surge in the development of tourism sector in the region. In 2019, more than 85,000 units of business jets manufacture in Europe were shipped globally, up from about 60,000 and 48,000 units in 2018 and 2017 respectively. 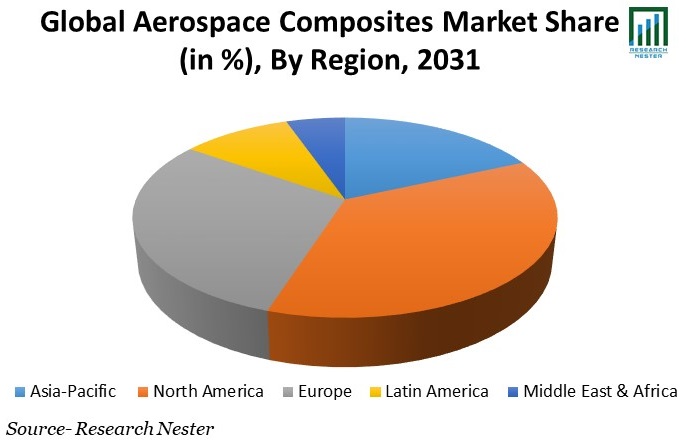 The global aerospace composites market is further classified on the basis of region as follows:

Our in-depth analysis of the global aerospace composites market includes the following segments:

What are the major factors driving the growth of the aerospace composites market?

The major factors driving the growth of the market are increasing demand for composites from the aircraft industry, and growing replacement of aging aircrafts with new ones.

What would be the CAGR of aerospace composites market over the forecast period?

Which region will provide more business opportunities for growth of aerospace composites market in future?

Who are the major players dominating the aerospace composites market?

What are the segments in the aerospace composites market?

The market is segmented by fiber type, aircraft type, and by region.

Which segment captures the largest market size in the fiber type segment in the aerospace composites market?

The carbon segment is anticipated to hold largest market size and is estimated grow at a robust CAGR over the forecast period and display significant growth opportunities.

Recyclability issues associated with aerospace composites are estimated to hamper the market growth.