A 3D mammography system is designed to provide 3D images of the breast in order to enhance the process of breast cancer screening. This system eliminates the need for biopsy procedures or other diagnostic tests including MRI and ultrasounds. It reduces the chances of any follow-up call as it provides the complete diagnosis in one screening test in most cases. The 3D technique enables doctors to identify cancerous as well as non-cancerous growths in cases where there are no perceivable symptoms. This provides an advantage over the 2D tomography technique. Moreover, the technique is much faster and provides high resolution 3D images which make the diagnosis of cancer much more efficient. The higher accuracy of 3D mammography allows detection of lesions in dense breast tissues as well, which is something that is difficult to identify through 2D mammography.

The new cases of breast cancer in the United States are estimated to be around 271,270 for both genders in 2019, out of which, 268,600 are estimated to occur in females while 2,670 are estimated to occur in males by the end of the year as per American Cancer Society. The number of deaths taking place due to breast cancer are estimated to be around 42,260 for both the genders in the same year, out of which, the number of deaths are estimated to be 500 in males and 41,760 in females. This necessitates effective detection of breast cancer at early stages which is further anticipated to lead to the market growth. The 3D mammography system market is anticipated to record a significantly high CAGR over the forecast period, i.e., 2019-2027. The market is segmented by application, by end user and by region. Based on end user, the market is segmented into diagnostic centers, hospitals, clinics and others, out of which, the hospitals segment is anticipated to hold the largest share in the global 3D mammography system market on account of preference of a large number of women to get breast cancer screening and diagnosis done at hospitals. Additionally, the highly advanced facilities and equipment available at hospitals along with presence of skilled medical professionals is further estimated to promote the market growth during the forecast period. CLICK TO DOWNLOAD SAMPLE REPORT 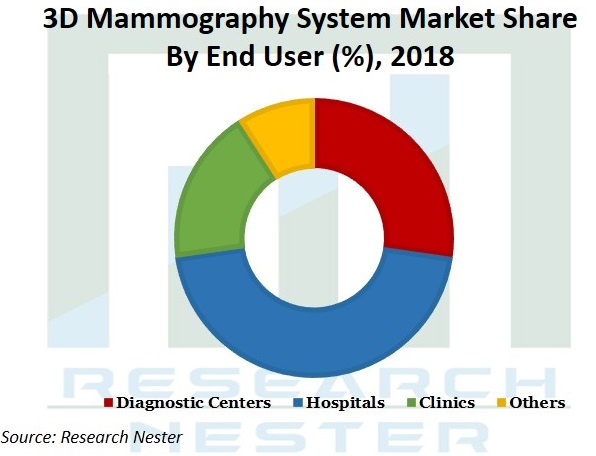 Technological advancements in the development of medical equipment for breast cancer screening is estimated to be a major growth stimulating factor for the market. The better healthcare infrastructure in various developed and developing regions across the world is anticipated to further raise the demand for new mammography techniques for the detection of breast cancer. Growing acceptance of 3D mammography by larger number of people as a result of its various benefits is a major factor estimated to boost the market growth.

According to the World Health Organization, an estimate of 627,000 women died from breast cancer in 2018, which comprised of approximately 15% of all cancer-related deaths among women globally that year. The increasing rate of breast cancers in most of the regions requires medical attention in order to ensure early detection of the cancer. The growing prevalence of breast cancer cases has led to rising awareness among women about the health disorder and the risks associated with it. Furthermore, the availability of modern approaches for breast cancer screening that take much lesser time and are extremely accurate is an additional factor estimated to result in the market growth.

Our in-depth analysis of the 3D mammography system market includes the following segments:

3D mammography techniques are being largely developed in the North America region which can be attributed to the estimated high growth of market in the region. Moreover, the greater number of companies in the region which are involved in development and manufacture of 3D mammography systems become an additional factor anticipated to contribute towards the market growth. The market in Asia-Pacific is estimated to witness highest growth rate during the forecast period on account of rising demand for improved diagnostic measures for breast cancer screening. The growing risk of breast cancer worldwide is another growth factor anticipated to substantially increase the market growth globally including the Asia-Pacific region.

The 3D mammography system market is further classified on the basis of region as follows: