The global zoster treatment market is estimated to gather a large amount of revenue and grow at a CAGR of ~14% over the forecast period, i.e., 2022 – 2030. The growth of the market can be primarily attributed to the high prevalence of the sickness and its increasing commonness among older populations. According to the Centers for Disease Control and Prevention, every year, a total of one million cases of herpes zoster occurs in the United States alone. The incidence of the disease among elderly population of 60 years and above is 1 case per 100 in the country.

In addition to these, the rising introduction of vaccines and medications for self-treatment, with the aim to opt for hospitalization only when of utmost necessity, is also a crucial factor expected to drive market growth in the upcoming years. Furthermore, upsurge in investments by prominent market players to develop effective and improved treatment for cutaneous viral infections is projected to offer profitable opportunities to the market in the near future. 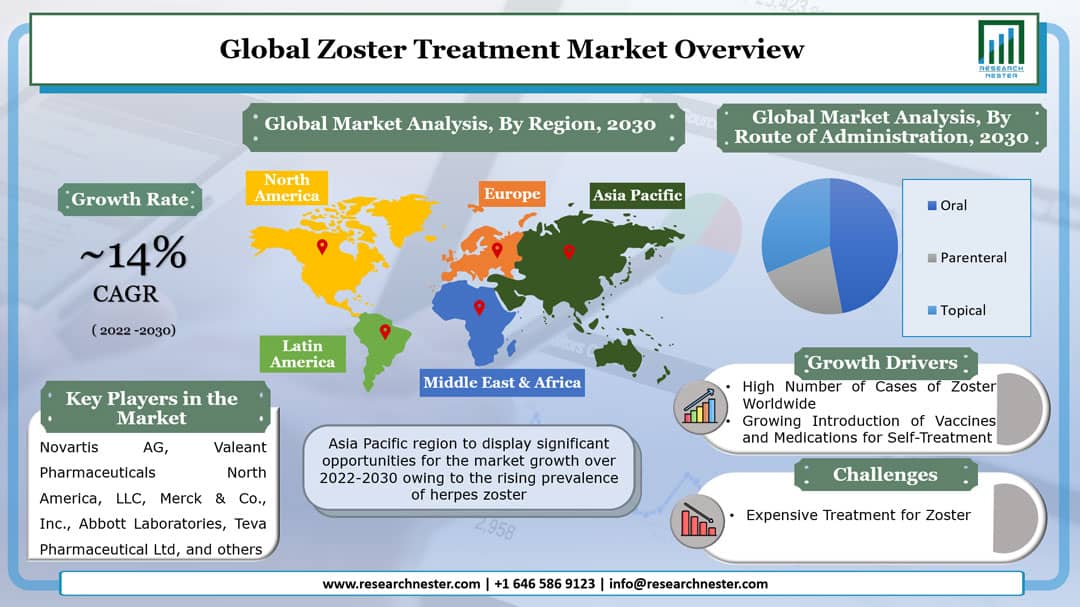 The market is segmented by treatment type into antiviral medications, narcotic medications, anti-inflammatory medications, antihistamines, anticonvulsants, creams, and Zostavax, out of which, the antiviral medications segment is anticipated to hold the largest share in the global zoster treatment market. This can be accounted to the ability of these medications to shorten the length of a viral infection, and their effectiveness in shortening the course of several viral illnesses. Additionally, on the basis of route of administration, the oral segment is predicted to acquire the largest share during the forecast period. Acyclovir, famciclovir and valacyclovir are some of the most common drugs for treating zoster, which are taken via oral route of administration. This in turn is largely forecasted to drive the growth of the market segment in the future.

On the basis of geographical analysis, the global zoster treatment market is segmented into five major regions including North America, Europe, Asia Pacific, Latin America and the Middle East & Africa region. The market in the Asia Pacific is estimated to witness noteworthy growth over the forecast period on the back of the growing occurrence of herpes zoster, and rising initiatives by governmental and non-governmental organizations associated with vaccination drives. Moreover, the market in North America is anticipated to acquire the largest share over the forecast period owing to the public authority support in several vaccination and awareness projects, and increasing elderly population in the region. Apart from these, allocation of high healthcare expenditure is also expected to boost the region’s market growth in the imminent time. As per the Centers for Medicare and Medicaid Services, the healthcare spending in the United States reached a value of USD 3.8 trillion, or USD 11,582 per person in 2019. The health spending accounted for 17.7 percent of the nation’s GDP. 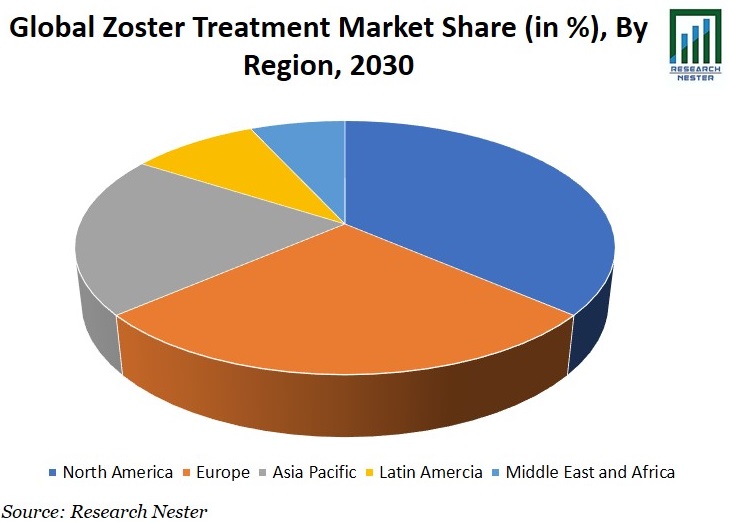 The global zoster treatment market is further classified on the basis of region as follows:

Our in-depth analysis of the global zoster treatment market includes the following segments:

What are the major factors driving the growth of the zoster treatment market?

The major factors driving market growth are high prevalence of zoster globally and rising introduction of vaccines and medications for self-treatment.

What would be the CAGR of zoster treatment market over the forecast period?

What are the challenges affecting the zoster treatment market growth?

High cost of zoster treatment is estimated to hamper the market growth.

Which region will provide more business opportunities for growth of zoster treatment market in future?

Asia Pacific will provide more business opportunities for market growth owing to the growing occurrence of herpes zoster, and rising initiatives by governmental and non-governmental organizations associated with vaccination drives.

Who are the major players dominating the zoster treatment market?

What are the segments in the zoster treatment market?

The market is segmented by treatment type, end user, route of administration, and by region.

Which segment captures the largest market size in the route of administration segment in the zoster treatment market?

The oral segment is anticipated to hold largest market size and is estimated to grow at a notable CAGR over the forecast period and display significant growth opportunities.