Extensive insights into the Growth of Xenobot Market amidst COVID-19

The global xenobot market is estimated to grow at a notable CAGR over the forecast period, i.e., 2022 – 2030. The growth of the market can be attributed to the growing research and advancement in biotechnology, backed by the surge in research funding by nations worldwide. According to the statistics by the National Institutes of Health (NIH) of the U.S. Department of Health & Human Services, stated that research funding for biotechnology increased from USD 5698 Million in the year 2013 to USD 7767 Million in the year 2020. Xenobots are synthetic lifeforms made of frog cells, that are capable of movement and following specific commands. Currently, researchers have developed xenobots that are able to push, pick, and pile microparticles, in a Petri dish, while a swarm of these robots can perform desired tasks. Moreover, these are biodegradable and can survive without food and water for weeks, which is estimated to boost the market growth. The concept of xenobot is in intermediate stage, where these are being produced in labs for study and experiments. 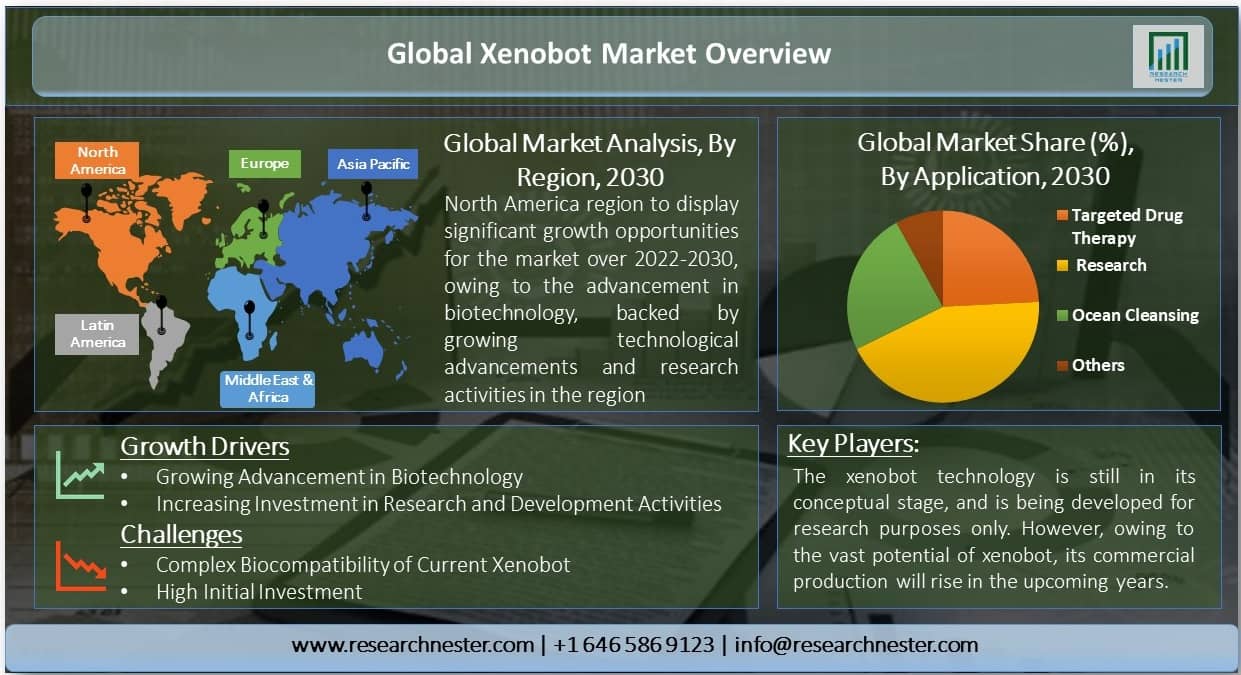 The market is segmented by application into targeted dug delivery, research, ocean cleansing, and others, out of which, the research segment is anticipated to hold the largest share in the global xenobot market over the forecast period on account of increasing use of xenobots to study various biological and biochemical reactions. For instance, xenobots are being extensively used to study the process of morphogenesis. However, the ocean cleansing segment is estimated to garner notable share by the end of 2030, as scientists are developing xenobots capable of collecting and aggregating microplastics of the ocean, to form big chunks of plastic that can be retrieved by any boat or drone.

On the basis of geographical analysis, the global xenobot market is segmented into five major regions including North America, Europe, Asia Pacific, Latin America and Middle East & Africa region. The market in the North America region is anticipated to gain the largest market share throughout the forecast period owing to the growing research and development activities in the various universities of United States and Canada. The advancements in technology, especially biotechnology, are another factor estimated to boost the market growth. 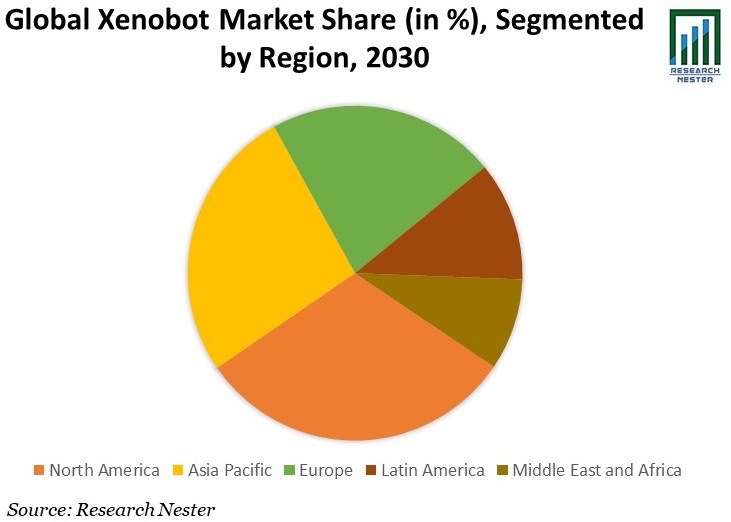 The global xenobot market is further classified on the basis of region as follows:

Our in-depth analysis of the global xenobot market includes the following segments:

The xenobot technology is still in its conceptual stage, and is being developed for research purposes only. However, owing to the vast potential of xenobot, its commercial application and production is estimated to gradually raise in the upcoming years.

What are the major factors driving the growth of the xenobot market?

Increasing advancement in biotechnology, and rising investment in research and development activities is estimated to boost the market growth.

What would be the CAGR of xenobot market over the forecast period?

What are the challenges affecting the xenobot market growth?

Complex biocompatibility of current xenobot is estimated to hamper the market growth.

Which region will provide more business opportunities for growth of xenobot market in future?

The market in the North America region will provide more business opportunities for growth owing to the advanced biotechnology in the region.

Who are the major players dominating the xenobot market?

The xenobot technology is still in its conceptual stage, and is being developed for research purposes only. However, owing to the vast potential of xenobot, its commercial application and production is estimated to gradually raise in the upcoming years.

What are the segments in the Xenobot market?

The market is segmented by component, type, application, and by region.

Which sub-segment captures the largest market size in application segment in the xenobot market?

The research segment is anticipated to hold largest market size over the forecast period, owing to the application of xenobots for studying the biochemical reactions.