The Western Europe power market for sinus surgery is estimated to garner a revenue of USD 94022.4 Thousands by the end of 2029, up from a revenue of USD 52819.3 Thousands in the year 2020, by growing with a CAGR of 6.6% during the forecast period, i.e., 2020-2029. The growth of the market can primarily be attributed to the increasing incidences of non-communicable respiratory diseases globally, and the growing burden of upper respiratory infections amongst individuals in the region. According to the statistics by the World Health Organization (WHO), the total number of deaths attributed to non-communicable respiratory diseases in Europe grew from 444316 numbers in the year 2000 to 458822 numbers in the year 2019. On the other hand, the age-standardized incidence rate of upper respiratory infections in Western Europe in the year 2019 recorded to around 274000 (per 100000 people). The market is also anticipated to grow on account of the increasing prevalence of sinus cases in Western Europe and for the growing advancements in the field of medical science. 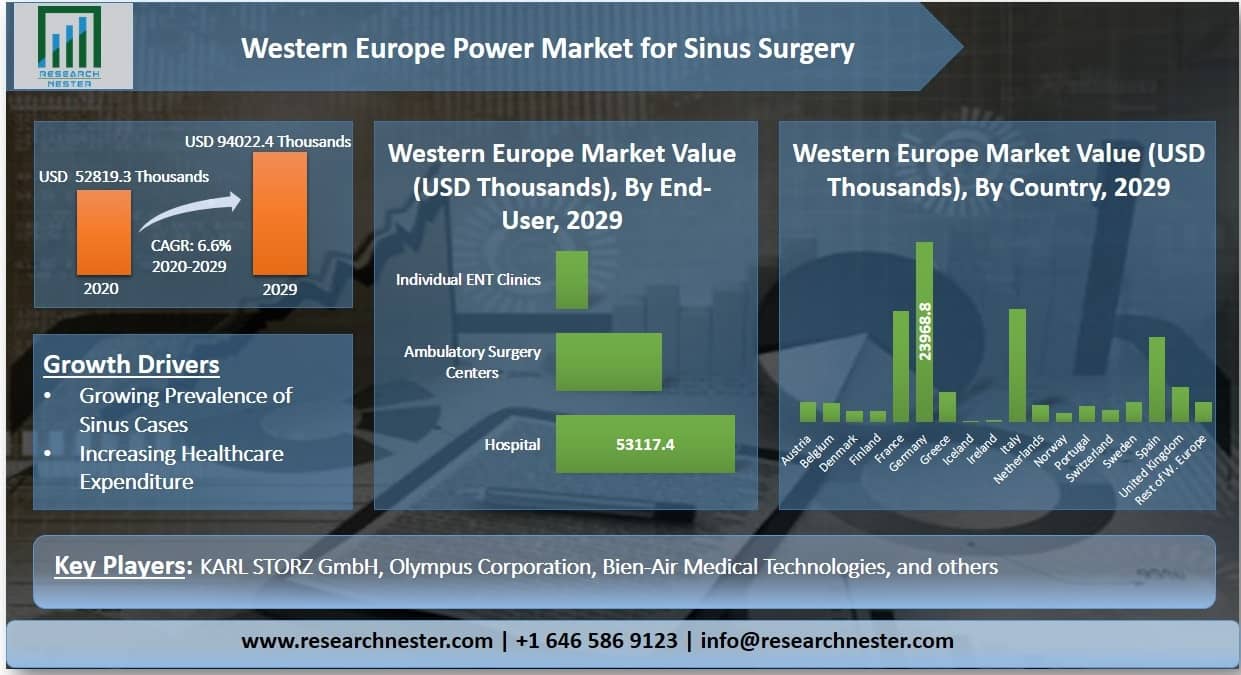 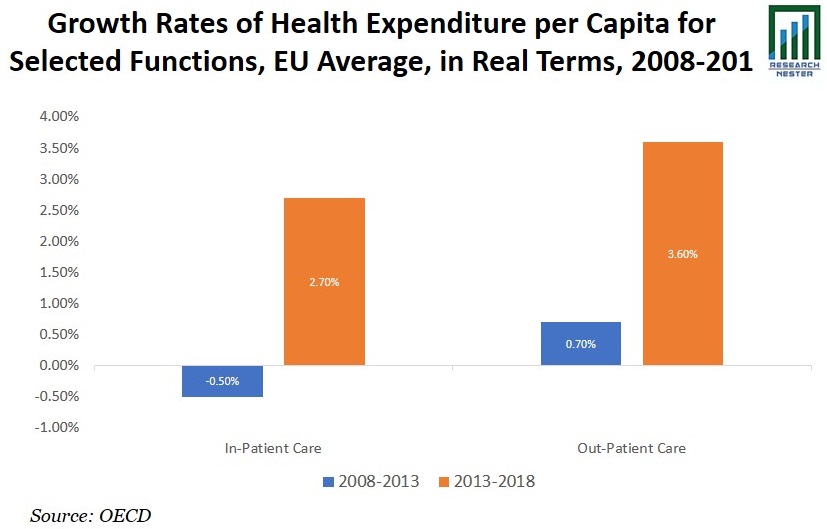 Regionally, the Western Europe power market for sinus surgery is segmented into Austria, Belgium, Denmark, Finland, France, Germany, Greece, Iceland, Ireland, Italy, Netherlands, Norway, Portugal, Switzerland, Sweden, Spain, UK, and the Rest of Western Europe. Amongst the market in these countries, the market in Germany is expected to hold the highest market share throughout the forecast period and further attain the largest market revenue of USD 23968.8 Thousand by the end of 2029, up from USD 13152 Thousand in 2020. The market in the country is further expected to grow with a CAGR of 6.9% during the forecast period. One of the major factors anticipated to drive the growth of the market in the country is the growing healthcare expenditure. According to the statistics by the World Bank, the current healthcare expenditure as a share of GDP touched 11.43% in the year 2018. Further, the recent developments in computer-assisted ENT surgeries across German hospitals, and the rising functional endoscopic sinus surgery (FESS) rate among children in the country as compared to other countries, are some of the additional factors expected to drive the market growth. On the other hand, the market in Italy is anticipated to grow with the highest CAGR of 7.8% during the forecast period.

1) What are the major factors driving the growth of the Western Europe power market for sinus surgery market?

Ans: The increasing sinus cases in Western Europe is one of the major factors anticipated to drive the market growth.

2) What would be the CAGR of Western Europe power market for sinus surgery market over the forecast period?

3) What are the challenges affecting the Western Europe power market for sinus surgery market growth?

Ans: The lack of availability of skilled personnel for operating these tools is one of the major factors estimated to hamper the market growth.

4) Which region will provide more business opportunities for growth of Western Europe power market for sinus surgery market in future?

Ans: The lack of availability of skilled personnel for operating these tools is one of the major factors estimated to hamper the market growth.

5) Who are the major players dominating the Western Europe power market for sinus surgery market?

Ans: The major players in the market are KARL STORZ GmbH, Olympus Corporation, Bien-Air Medical Technologies, and others.

7) What are the segments in the Western Europe power market for sinus surgery?

Ans: The market is segmented by device type, procedure, end-user, and by region.

8) Which segment captures the largest market size in end-user segment in the Western Europe power market for sinus surgery?

Ans: The hospitals segment is anticipated to hold largest market size of USD 53117.4 Thousand by the end of 2029 and display significant growth opportunities.