The global waterborne coatings market is estimated to garner a large amount of revenue by growing at a CAGR of ~5% over the forecast period, i.e., 2022 – 2031. The growth of the market can be attributed to the rapidly rising urbanization, coupled with increasing number of construction and infrastructural projects around the world. According to the United Nations organization, the urban population of the world increased rapidly from 751 million in 1950 to 4.2 billion in 2018. The total number of people living in urban areas is evaluated to rise to 68% by 2050. Along with these, the preference of waterborne coatings in industries, namely automotive and general aviation, is growing owing to their low volatile organic compounds (VOC) emissions. This in turn is also expected to drive market growth significantly in the upcoming years. Furthermore, government initiatives focusing at increasing the water content as a solvent for coating materials is projected to offer ample growth opportunities to the market in the near future. 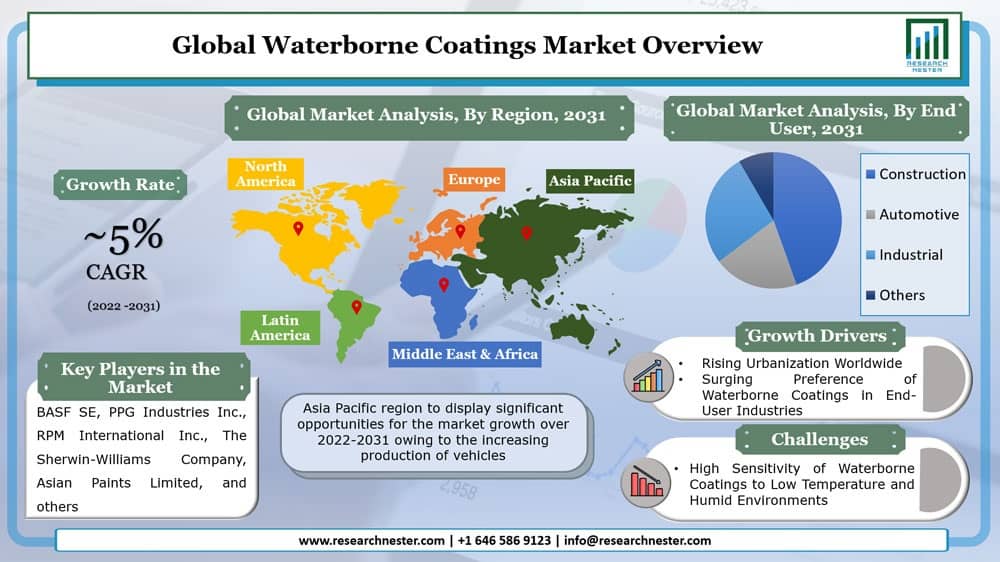 The market is segmented by resin type into acrylic, polyester, alkyd, epoxy, polyurethane, PTFE, PVDF, and PVDC, out of which, the acrylic segment is anticipated to hold the largest share in the global waterborne coatings market. This can be accounted to the excellent color and gloss retention offered by acrylic coatings in outdoor exposure. Apart from this, escalating usage of acrylic modified polyurethane coatings in automotive refinishes in view of their excellent exterior durability, is also predicted to drive growth of the market segment in the future. Additionally, on the basis of end user, the construction segment is assessed to grab the largest share during the forecast period ascribing to the high utilization of the coatings in architectural applications, such as doors, trims, wood varnishes, window frames, and interior & exterior walls. CLICK TO DOWNLOAD SAMPLE REPORT

Regionally, the global waterborne coatings market is segmented into five major regions including North America, Europe, Asia Pacific, Latin America and the Middle East & Africa region. The market in Asia Pacific is estimated to witness noteworthy growth and acquire notable share over the forecast period on the back of the growing production of automobiles in the region. In September 2021, about 300,000 commercial vehicles and 1.5 million passenger cars were produced in China. The automobile industry manufactured around 1.5 million vehicles more that month as compared to October, 2021. In addition, rise of new industries in Asia ascribing to provision of government tax incentives and low labor costs is also expected to boost the market growth in the region in the coming years. Moreover, the market in Europe is projected to grab the largest share during the forecast period owing to the launch of government initiatives about lowering VOC content in coatings and paints in the region. 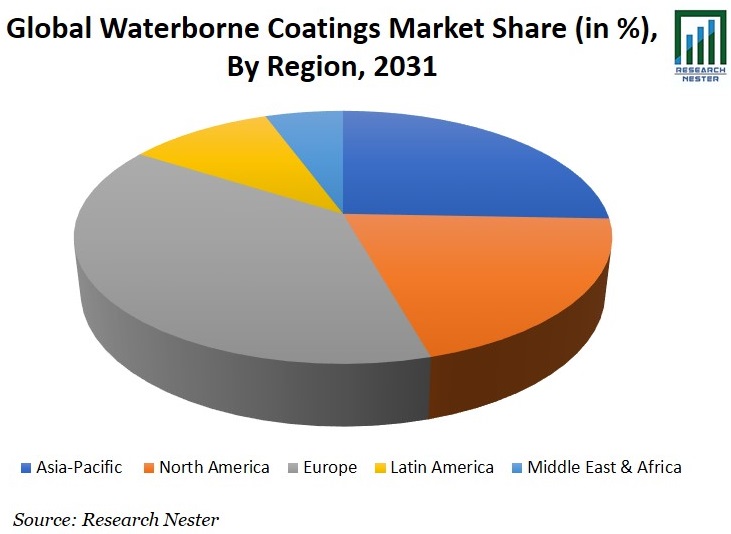 The global waterborne coatings market is further classified on the basis of region as follows:

Our in-depth analysis of the global waterborne coatings market includes the following segments:

What are the major factors driving the growth of the waterborne coatings market?

The major factors driving market growth are rapidly rising urbanization around the world, and growing preference of waterborne coatings in various end-user industries.

What would be the CAGR of waterborne coatings market over the forecast period?

What are the challenges affecting the waterborne coatings market growth?

High sensitivity of waterborne coatings to low temperature and high humidity is estimated to hamper the market growth.

Which region will provide more business opportunities for growth of waterborne coatings market in future?

Asia Pacific will provide more business opportunities for market growth owing to the growing production of automobiles in the region.

Who are the major players dominating the waterborne coatings market?

The major players in the market are BASF SE, PPG Industries Inc., RPM International Inc., The Sherwin-Williams Company, Asian Paints Limited, and others.

What are the segments in the waterborne coatings market?

The market is segmented by resin type, end user, and by region.

Which segment captures the largest market size in the resin type segment in the waterborne coatings market?

The acrylic segment is anticipated to hold largest market size and is estimated grow at a robust CAGR over the forecast period and display significant growth opportunities.