Global gaming virtual reality is the fast growing market across the globe due to presence of high-end & graphics game. The Global Virtual Reality Market is expected to grow at a CAGR of 42.78% in the forecast period of 2015-2021 and expected to cross USD 40 Million by 2021.

North-America Virtual Reality Market is projected to grow at a CAGR of >40% in the forecast period of 2015-2021. The penetration of smartphones in the region due to advancement of electronic devices in the U.S. would help the region to dominate the global virtual reality market in future. Further, on the back of reasons like, increased personal disposable figures, expanded demand from healthcare, enhanced IT infrastructure, better GDP figure etc. virtual reality market in Asia-Pacific is projected to grow at a CAGR greater than North America during 2015-2021. CLICK TO DOWNLOAD SAMPLE 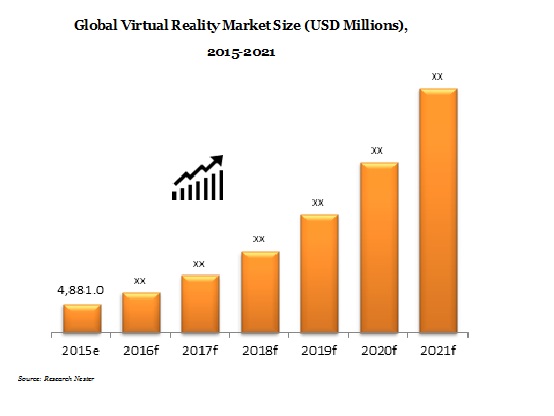 Virtual Reality Market is further classified on the basis of region as follows:

Global video games industry revenue is anticipated to augment at a compound annual growth rate (CAGR) of 6.1% during 2015-2019. This expansion of gaming industry is likely to encourage more experiments in terms of quality and providing enhanced VR (virtual reality) experience to the gamers. This in-turn is expected to benefit both the VR hardware and software content developers and foster their market over the forecast period.

Virtual reality finds a wide range of applications in the healthcare sector such as in nurses and doctors training, anxiety therapy, surgery simulation, etc. In addition to this, virtual reality is also utilized in the field of telemedicine. It is projected that the global telemedicine market would propagate at a stupendous compound annual growth rate (CAGR) of 19% during 2016-2022. This spurt in the telemedicine industry is expected to escalate the demand of virtual reality in telemedicine applications, for example- in telesurgery and others.

The Virtual reality technology is not timeworn and still in its transition phase. Owing to which, various technical and other issues related to this technology keeps arriving time and again. For instance, image latency is one such concern which leads to motion sickness, eye strain and nausea. In addition to this, people wearing a virtual reality device are more prone to get hurt physically as their vision is completely blocked.