The global vertical-cavity surface-emitting laser (VCSEL) market is estimated to grow at a CAGR of ~18% over the forecast period, i.e., 2022 – 2031. Vertical-cavity surface-emitting laser or VCSEL is a semiconductor-based laser diode, which emits optical beam vertically from its top surface. It is a vital component for 3D sensor systems, including 3D facial identification systems, light detection and ranging (LiDAR), world-facing cameras on mobile handsets, and sensing for autonomous driving vehicles. The growth of the market can be attributed to the growing applications of VCSEL. Moreover, the growing adoption of automated vehicles is estimated to primarily boost the market growth.  According to the International Organization of Motor Vehicle Manufacturers, 97.302 million vehicles were produced in the year 2017, which grew by 2.36 percent from the previous year. Further, the size of the autonomous vehicles industry reached approximately USD 23 billion in 2020, which is estimated to cross USD 35 billion by 2023.  Moreover, VCSEL is also applied in gesture recognition, augmented reality, virtual reality, robotics, metaverse, and proximity sensors, which is projected to further promote the market growth. 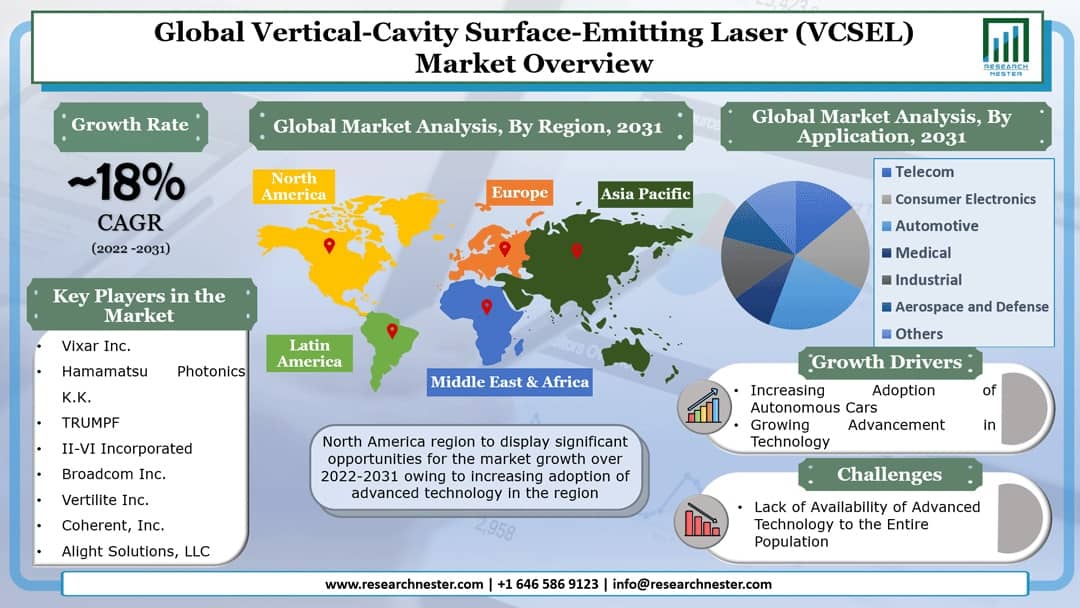 The market is segmented by application into telecom, consumer electronics, automotive, medical, industrial, aerospace and defense, and others, out of which, the automotive segment is anticipated to hold a substantial share in the global vertical-cavity surface-emitting laser (VCSEL) market over the forecast period on account of growing adoption of self-driving vehicles across the globe.CLICK TO DOWNLOAD SAMPLE REPORT

On the basis of geographical analysis, the global vertical-cavity surface-emitting laser (VCSEL) market is segmented into five major regions including North America, Europe, Asia Pacific, Latin America and Middle East & Africa region. The market in Asia Pacific region is estimated to witness modest growth over the forecast period on the back of increasing sales and production of vehicles, rapid surge in consumer population, and deployment of government policies supporting industrial growth.

The market in the North America region is anticipated to gain the largest market share throughout the forecast period growing adoption of ADAS in vehicles, along with rising production of cars in the region. According to the report by IEA, 17 million cars were sold in the United States in 2019. 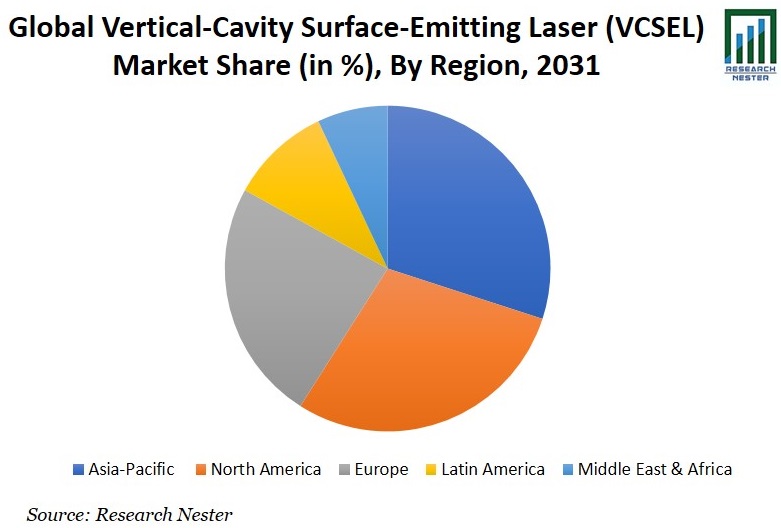 The global vertical-cavity surface-emitting laser (VCSEL) market is further classified on the basis of region as follows:

1) What are the major factors driving the growth of the vertical-cavity surface-emitting laser (VCSEL) market?

2) What would be the CAGR of vertical-cavity surface-emitting laser (VCSEL) market over the forecast period?

3) What are the challenges affecting the vertical-cavity surface-emitting laser (VCSEL) market growth?

Ans: Lack of availability of advanced technology in underdeveloped regions is estimated to hamper the market growth.

Ans: The North America region is anticipated to provide more business opportunities over the forecast period owing to the increasing adoption of advanced technology in the region.

5) Who are the major players dominating the vertical-cavity surface-emitting laser (VCSEL) market?

7) What are the segments in the vertical-cavity surface-emitting laser (VCSEL) market?

Ans: The market is segmented by type, material, application, and by region.