Extensive insights into the Growth of Umbrella Market amidst COVID-19

Umbrella is a canopy-like structure designed to protect a person from sunlight or rain. Usually, the umbrella canopy, which is made up of waterproof or non-waterproof flexible plastic or fabric, is supported by wooden or metal ribs mounted on a plastic or wooden pole. Umbrellas are primarily designed to be held by the hand for greater portability. Also, there are other types of umbrellas whose canopy is larger in size and are used to cover a large area. These umbrellas, also known as parasols, sun-shades, and others, are usually anchored to the ground surface. The raw materials used for making an umbrella include canopy material, such as microfiber fabrics, nylon taffeta, cotton, acetate, laces, leather, linen, and others, along with materials such as aluminum, steel, wood, and plastic for other parts.

The global umbrella market is thriving on account of the numerous beneficial properties associated with the use of umbrellas, along with the improved attributes of umbrellas and the additional features added to the device. Umbrella is considered to be one of the most useful inventions in the world. These devices protect from rain and sunlight and also provide shelter. Over the years, with the advancement in technology and process automation, numerous reforms have been made in the conventional umbrellas, ranging from the change in their design to the different types of fabrics used for the canopy. The global umbrella market is anticipated to be valued at more than USD 7 Billion by 2025 and is projected to market a CAGR of around 2% over the forecast period 2019-2025. The market is segmented by product type into straight, folding, reverse, automatic, golf, and others. The folding umbrella segment is further divided into two-fold, and three & more fold, out of which, the three and more fold segment is projected to grab the maximum share in the overall revenue of the global umbrella market. The growth of the segment can be attributed to the small size of the three and more fold umbrellas, and also for their foldable nature, which makes them easy to be carried into a handbag or glove compartment. 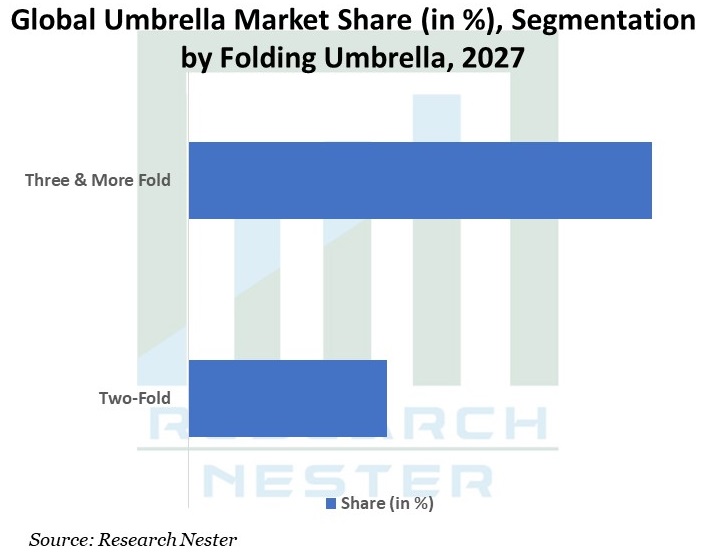 Despite the increasing accuracy of weather forecasts, the degree of uncertainty in all the predictions is inevitable. The sudden change in weather conditions can be attributed to various factors, one of them being global warming. Owing to the unpredictable weather conditions, there can be sudden rain or scorching sun, which is raising the need amongst the individuals to always carry an umbrella with them. On the other hand, the growing concern for skin cancer, which according to the World Health Organization (WHO) noted around 132,000 melanoma skin cancers and in-between two and three million non-melanoma skin cancers every year around the globe, is raising the need amongst the individuals to increasingly use an umbrella as it protects an individual from the deadly radiations of the sun. Such factors are anticipated to drive the growth of the global umbrella market during the forecast period.

Umbrellas nowadays have become a “must-have” fashion accessory owing to their utilization across several application areas, such as for walking, while playing golf, to save from rain, wedding umbrellas, religious ceremony umbrellas, and others. Designer umbrellas are available in different contemporary designs that are coupled with added aesthetics and vibrant colors. Additionally, with the advancement in fabric technology, designers are adapting to a wide range of available fabric materials for the canopy of the umbrella. Moreover, with the availability of chemically advanced materials, umbrella manufacturers are coating the inside and outside layers of the canopy with various additives that add beneficial properties to the umbrella. On the other hand, umbrellas are also widely used in photography. These types of umbrellas have a reflective side on the inner surface of the canopy which is used by photographers as a diffusion device when employing artificial lighting. Moreover, umbrellas are also being used by several companies in public places for the promotion of their brand. Such factors are anticipated to drive the growth of the global umbrella market during the forecast period.

Presence of a Large Unorganized Market

The global umbrella market is operated by several organized and unorganized players. The unorganized players are opting for low-quality materials and are hence offering different types of umbrellas at a lower price point as compared to the organized players, which is anticipated to significantly hamper the market growth during the forecast period.

Our in-depth analysis of the global umbrella market includes the following segments:

The market for umbrella in North America is anticipated to hold the largest market share by the end of the forecast period. The growth of the market can be attributed to the growing demand for umbrella from nations such as the United States, which is also one of the major importers of umbrella globally. According to the statistics by the International Trade Center, the imports of umbrellas in the United States increased from USD 440, 625 thousand in the year 2010 to USD 553,451 thousand in the year 2019. 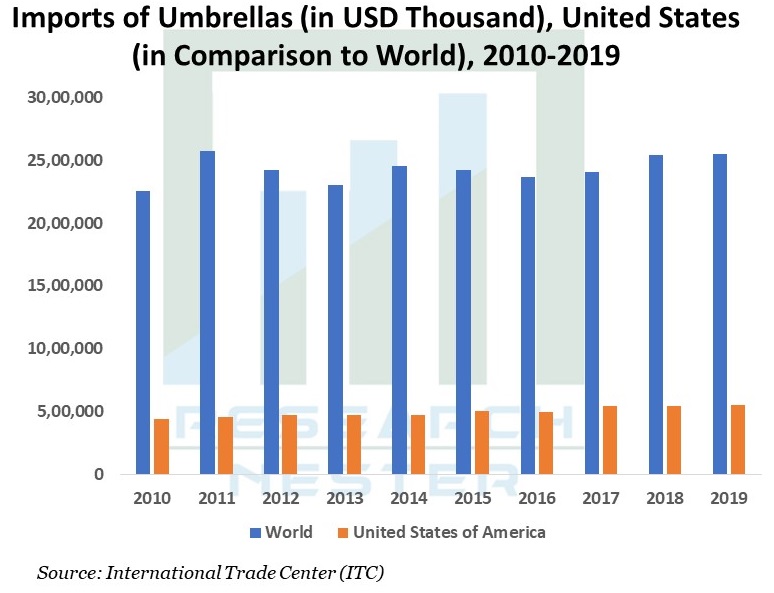 The global umbrella market is further classified on the basis of region as follows:

What are the major factors driving the growth of the Umbrella market?

Increasing concern for skin cancer and growing popularity for designer umbrellas are some of the major factors driving the market growth.

What would be the CAGR of Umbrella market over the forecast period?

Who are the major players dominating the Umbrella market?

Concerns for the impact on the profitability of the umbrella manufacturers owing to the presence of numerous unorganized players is one of the major factors estimated to act as barriers to the growth of the market.

What are the segments in the umbrella market?

The umbrella market is segmented by product type, end user, application, distribution channel, and by region.

What can be the significant growth opportunity for the product type segment in the umbrella market?

The three & more fold segment, which is a sub-segment of the folding segment under product type segment, is anticipated to hold the largest market share on account of the foldable nature and small size of these umbrellas.

N95 Mask Market Segmentation by Mask type (With Breathing Valve and Without Breathing Valve); and by Application (Industrial, Individual, Hospitals and Clinics, and Others) – Global Demand Analysis and Opportunity Outlook 2021-2029