Geographically, the market is segmented into North America, Latin America, Europe, Asia Pacific and the Middle East & Africa region. The market in the Asia Pacific is predicted to grow at the highest CAGR over the forecast period owing to the increasing necessity for advanced diagnosis methods to detect various disease indications such as neurological disorders, cancer, cardiovascular diseases, and others. Moreover, the developing healthcare sector, supported by the increasing government investment in the public healthcare system is also expected to boost the market growth.

The market in the North America is evaluated to occupy the largest share in terms of revenue, by the end of 2030, owing to the increasing prevalence of cardiovascular diseases in the region. According to American Heart Association, in 2017, CVD has been listed as one of the most prominent underlying causes of death in the United States, which accounted for around 74% of all deaths. As per the data by the CDC, one person dies every 36 seconds in the United States from cardiovascular diseases. Such an increasing number of CVD cases in the United States has significantly increased the demand for ultrasound examination in this region, which is further expected to drive the demand for ultrasound contrast agents in the region. 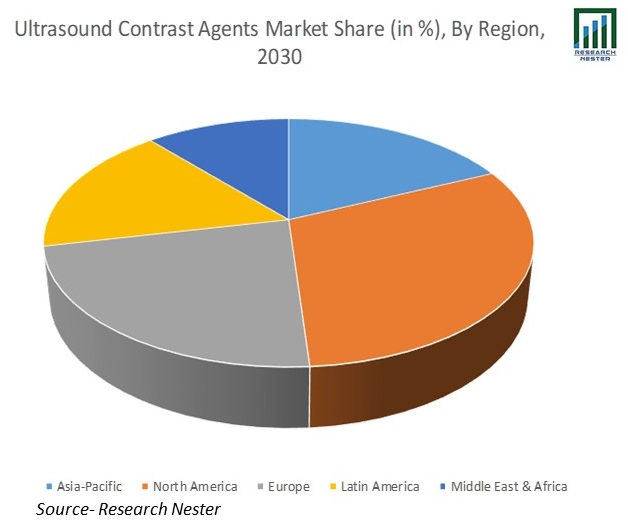 The global ultrasound contrast agents market is further classified on the basis of region as follows: 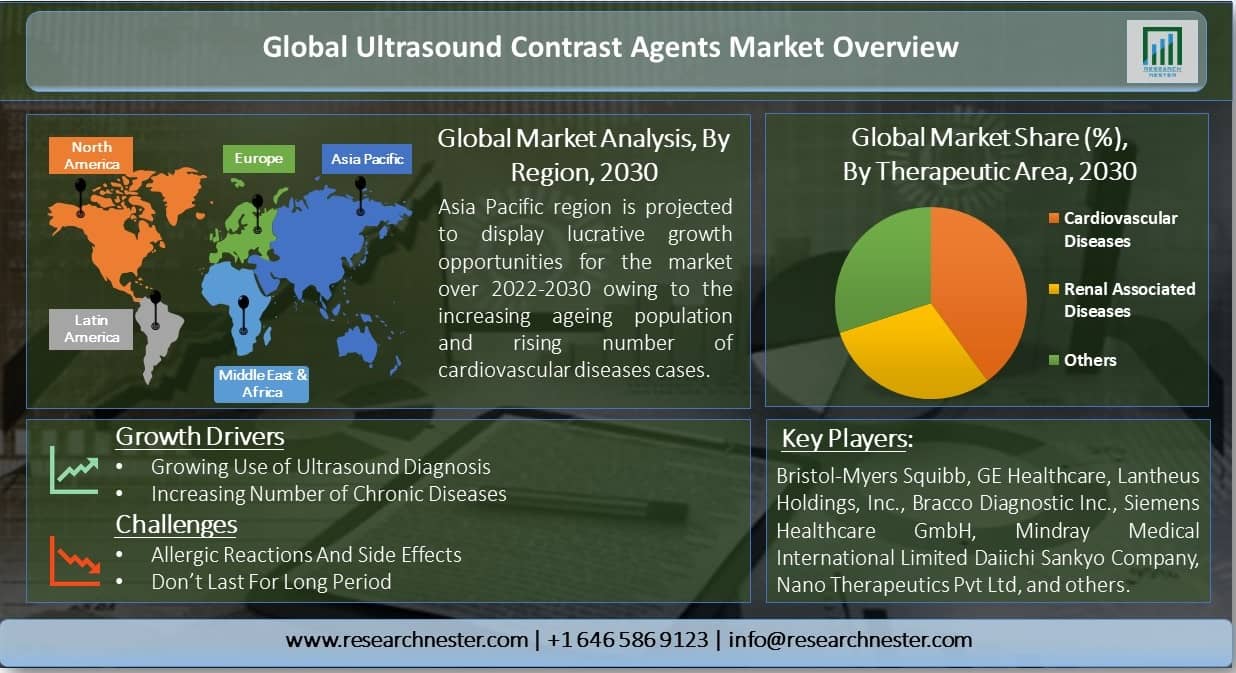 1) What are the major factors driving the growth of the ultrasound contrast agents market?

2) What would be the CAGR of ultrasound contrast agents market over the forecast period?

3) What are the challenges affecting the ultrasound contrast agents market growth?

Ans: Allergic reactions & side effects and short-term effect of the ultrasound contrast agents are estimated to hamper market growth.

4) Which region will provide more business opportunities for growth of ultrasound contrast agents market in future?

Ans: The market in North America region will provide ample growth opportunities over the forecast period owing to the increasing number cardiovascular diseases in the region.

5) Who are the major players dominating the ultrasound contrast agents market?

7) What are the segments in the ultrasound contrast agents market?

Ans: The market is segmented by therapeutic area, application, end-user, and region.

8) Which segment under the therapeutic area segment captures the largest market size in the ultrasound contrast agents market?

Ans: With respect to therapeutic area, the cardiovascular segment is anticipated to hold the largest market share owing to the increasing incidence of cardiovascular diseases globally.