Over the past few years, the thrombopoietin receptor agonists have been established as the most significant in the treatment of immune thrombocytopenia purpura (ITP), a disorder in which there is a shortage of blood cells called platelets. They are a type of platelet growth factors that mimic the activity of internal thrombopoietin on megakaryocytes promoting their growth and increasing platelet production. Their efficacy is attributed to megakaryocytes survival which improves the platelet count through underproduction defect reversal. Additionally, their use is under investigation for treatment of numerous other thrombocytopenic disorders.

Immune thrombocytopenia purpura is a lethal disease where shortage of platelets could create complications. Thrombopoietin receptor agonists (TPO-RAs) have been pivotal in managing the disease. In the recent times, pharmaceutical companies manufacturing drugs for rare diseases have received approval from European Medicines Agency and the United States Food and Drug Administration. Owing to these factors, the market is expected to attain a significant CAGR during the forecast period 2020-2028. The market is segmented by distribution channel into hospital pharmacy, retail pharmacy, online pharmacy and others, out of which, the hospital pharmacy segment is anticipated to grow at the highest rate on the back of rising number of hospitals across the world. CLICK TO DOWNLOAD SAMPLE REPORT 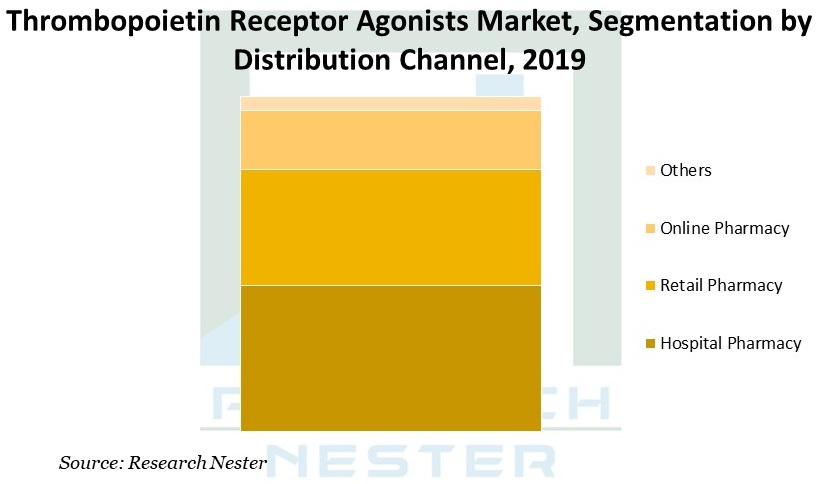 According to the World Health Organization, the incidence of ITP among adults is estimated to be 32 cases per one million people every year. Increasing prevalence of the disease is projected to drive the market growth during the forecast period. Frequent awareness activities by ITP support associations in the developed countries have been pivotal in making the masses aware about the disorder which could further fuel the market growth.

Treatment for immune thrombocytopenia purpura puts a financial burden on the patient and his family. To offset this burden, many governmental organizations and private firms are collaborating proactively to regulate the drug prices and assist the patients and their families. This financial assistance by the government is anticipated to boost the market growth during the forecast period. Moreover, increasing investments for thrombopoietin receptor agonists (TPO-RAs) research and development in order to invent sophisticated technology that helps in enhancing the drug performance is anticipated to drive the market growth in the coming few years.

Thrombopoietin receptor agonists (TPO-RAs)s are generally well tolerated by most patients. However, side effects such as headache, fatigue, nausea and aminotransferase are estimated to negatively affect the market growth in future.

On the basis of regional analysis, the thrombopoietin receptor agonists market (TPO-RAs) market is segmented into five major regions including North America, Europe, Asia Pacific, Latin America and Middle East & Africa. Based on this, the market in North America is anticipated to hold the largest market share on the back of rising awareness of the rare blood disorders, advanced healthcare facilities, easier access to the treatment of ITP and higher investment in research and development activities. In addition, the market in Asia Pacific is expected to record the highest CAGR over the forecast period owing to increasing economic growth and rising awareness of the rare blood disorders among people in the region.

The global thrombopoietin receptor agonists (TPO-RAs) market is further classified on the basis of regions as follows: