Thermal imaging systems are like thermal cameras that can sense and identify any amount of difference in the temperate of the subject by calculating the infrared energy emitted by it. The images obtained are known as thermograms that are the visual display of the infrared energy emission amount as well as transmission and reflection quantity by an object. These systems consists of a camera that holds the capability of interpreting the data by performing algorithms in order to build an image and they work on the principle of natural phenomenon of radiant heat exchange which takes place all the time and everywhere. Thermal imaging is extensively used in defense industry on the back of its property of catching moving targets in real time by temperature comparison over a large area and giving a visual picture.

North America market is panned to observe significant growth on account of increasing military modernization to grasp a strong foothold for military superiority and is estimated to be followed by Europe’s market due to growing requirement of thermal imaging systems in defense as well as in commercial applications across the region. Asia Pacific is expected to positively impact the growth of the market owing to increasing applications of thermal imaging systems for breast cancer detection over the forecast period.

Rising application for Security and Surveillance

With growing crimes and violence in various parts of the world, the homeland security forces have increased their budgets to procure the advance protective systems to offer constant feed of information to soldiers and police on the ground, which is further expected to drive the thermal imaging systems market over the forecast period. Additionally, with rising number of cross border terrorism leading to insurgency issues across the globe is resulting in military modernization programs. These factors are expected to contribute significantly towards the market shares. Moreover, rising demand for longer range, high power, advanced protective surveillance systems is expected to drive the thermal imaging systems market across the globe.

Increasing use of thermal imaging in computer aided abdominal imaging diagnosis, color analysis of thermograms for breast cancer detection, detection of breast abnormality using rotational thermography and others, are the major factors that are attributed to expand the thermal imaging systems market considerably in healthcare domain over the forecast period. The World Health Organization states that in 2018, approximately 2.1 million were diagnosed with breast cancer contributing about 11.6% of the total cancer incidence burden across the globe. The WHO also reports that breast cancer is a leading type of cancer which is expected to increase further leading to the expansion of the thermal imaging systems market during the forecast period. These systems are also used for neoplastic, metabolic, and inflammatory conditions, thyroid gland abnormalities, neuromusculoskeletal disorders and various other forms of medical imaging.

Furthermore, increasing technological advancements offering systems with higher pixel density and sensitivity, compactness, and flexibility with the ability to penetrate across new application verticals accompanied with cost efficiency is anticipated to aid the market growth across the globe. Additionally, rising commercialization with growing adoption of these devices in the automotive industry is predicted to induce further expansion in the growth of thermal imaging systems market over the forecast period.

However, different countries having different regulatory standards for the purpose of import and export of thermal imaging sensors used in the systems is expected to serve as a key restraint in the growth of the thermal imaging systems market over the forecast period.

Global Thermal Imaging Systems Market is further classified on the basis of region as follows: 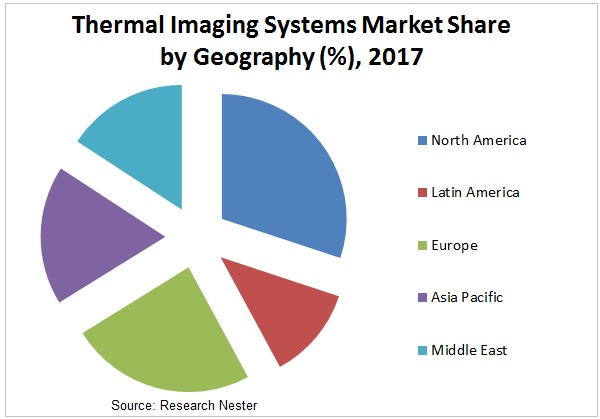