A subcutaneous implantable defibrillator system (S-ICD) is a form of a defibrillator that provides protection from sudden cardiac arrest while leaving the heart and vasculature untouched. It was first approved by the Food and Drug Administration (FDA) of the United States in the year 2012. S-ICD system use a pulse generator which is capable of delivering life-saving therapy. It uses a subcutaneous electrode and analyzes the heart rhythm to effectively sense, discriminate, and convert ventricular tachycardia (VT)/ ventricular fibrillation (VF). When a very fast and abnormal heart rhythm is detected by S-ICD it then delivers energy to the heart muscle. As a result, the heart starts to beat again in a normal rhythm.

Factors leading to the prevalence of cardiovascular diseases such as increasing geriatric population, unhealthy lifestyle of people, alcohol consumption, smoking, and others, are anticipated to create numerous growth opportunities for the global subcutaneous implantable defibrillator system market over the coming years. The S-ICD market is anticipated to record a significant CAGR over the forecast period, i.e., 2021-2028. The S-ICD market is segmented by end user into hospitals, clinics, cardiac catheterization laboratory, ambulatory surgical centers, and others. Among these segments, the hospitals segment is anticipated to hold the largest market share over the forecast period on the back of severe complications, such as increased heartbeat, shortness of breath, heart palpitations, chest pain, and others, are associated with cardiovascular diseases. According to the World Health Organization (WHO), cardiovascular diseases are the primary cause of death globally, taking an estimate of 17.9 million lives each year. Patients suffering from cardiovascular diseases require critical observation and care. Owing to the availability of such critical care at hospitals, and the increasing preference of individuals for critical care in hospitals, the segment is anticipated to mark remarkable growth during the forecast period. CLICK TO DOWNLOAD SAMPLE REPORT 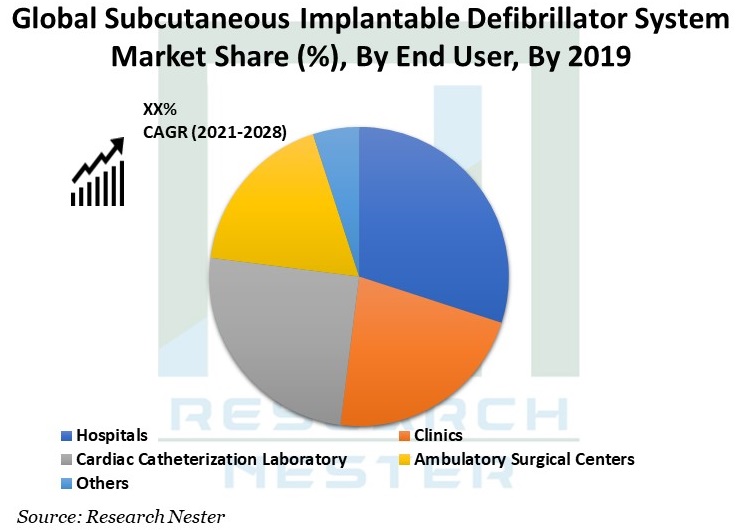 According to the WHO, over three quarters of deaths which are caused due to cardiovascular diseases, take place in low and middle-income countries.

CVDs comprise of heart and blood vessels disorders which include coronary heart disease, rheumatic heart disease and others. Heart attacks and strokes contributes about 80% of the CVD deaths, and around one-third of these deaths occur prematurely in people under 70 years of age, according to the WHO. On the back of increasing prevalence of CVDs, there is a significant increase in the demand for subcutaneous implantable defibrillator systems.

The need to minimize the risk caused due to the severe complications associated with transvenous leads, such as infections in the bloodstream, along with the need to remove or replace the leads in the heart, led to the development of the S-ICD systems. S-ICD is somewhat different from a conventional ICD. The wires, also known as leads, which run from the device to the heart, are implanted under the skin in the S-ICD systems, unlike that of the ICD systems, where the leads are implanted in the veins. This procedure allows the leads to be more easily removed and replaced when required. Such advantages associated with S-ICD over conventional ICD is anticipated to create growth opportunities for the global S-ICD system market over the forecast period.

Despite the growing market for subcutaneous implantable defibrillator system, the high costs of deploying the device and its maintenance acts as a challenging factor towards the growth of S-ICD system market. Affording such an expensive procedure, especially by the low- and middle-income nations, is anticipated to decrease the demand for subcutaneous implantable defibrillator systems market over the coming years.

The market in North America is anticipated to hold the largest share of the subcutaneous implantable defibrillator system over the forecast period on the back of rising geriatric population and availability of advanced treatment options in the region. Moreover, the initiatives taken by the United States government such as ‘Million Hearts’ to spread awareness against cardiovascular diseases are anticipated to drive the growth of S-ICD system market over the coming years. Million Hearts 2022 is a national initiative of the United States which began in 2017 to prevent 1 million heart attacks and strokes by 2022. On the other hand, the market in Europe is anticipated to follow the market in North America on the account of development of advanced technologies and better reimbursement policies in the region.

The global subcutaneous implantable defibrillator system market is further classified based on region as follows:

Boston Scientific Corporation and Medtronic are the leading organizations dealing in subcutaneous implantable defibrillator system market. The subcutaneous implantable defibrillator system of Boston Scientific Corporation, EMBLEM MRI S-ICD, is known for providing protection from sudden cardiac death. This device is also known to mitigate the risks and complications that are associated with the transvenous leads. Moreover, other market players are working towards innovations in S-ICD system market to provide a wide range of products over the coming years.