With growing technological advancements in healthcare sector and growing chronic disease incidences globally, the stem cell treatment market is attributed to grow on the back of its wide range of applications in disease treatment. Increasing popularity of umbilical cord cell storage for future applications is estimated to propel the market shares in the next few years. The WHO states that cancer is the second leading cause of death with 8,62,000 colorectal cancer deaths, 7,83,000 stomach cancer deaths and 7,82,000 liver cancer deaths in 2018, that are capable of being treated by stem cells. These factors are believed to augment the market growth significantly during the forecast period i.e. 2019-2027.

On account of increasing cases of cancer and cardiovascular diseases with rising application of stem cells in their treatment, the market is anticipated to grow with the CAGR of 12% over the forecast period. Growing expansions in infrastructure for stem cell banking and processing along with identification of new lines of stem cells will accentuate the market growth across the globe. Additionally, increasing healthcare expenditures with growing recognition among the population for cellular therapies are expected to boost the market shares robustly over the forecast period. The application of stem cells in treating brain injuries, cerebral palsy, Parkinson’s disease, type 1 diabetes, rheumatoid arthritis and various types of anemia are expected to further the growth of the stem cell treatment market during the forecast period.On the basis of regional platform, the global stem cell treatment market is segmented into five major regions including North America, Europe, Asia Pacific, Latin America and Middle East & Africa region.

North America is expected to display the highest growth owing to the presence of well-developed healthcare infrastructure across the region along with high awareness rate regarding healthcare procedures among the present population. Asia Pacific is estimated to follow North America on the back of rising research investments and growing patient pool across the region as well as the presence of major market players across the countries such as, China, India, Japan and others during the forecast period. Europe is anticipated to showcase a budding growth on the back of growing government initiatives to make the procedure ethically correct.CLICK TO DOWNLOAD SAMPLE

With increasing incidences of chronic diseases such as, cancer, sickle cell disease, lymphoproliferative disorders, tumors, and others, the stem cell treatment market is expected to grow on the back of rising awareness among the present population regarding applications of stem cell in these types of disease treatment. Further, the increasing incidences of immune disorders such as severe combined immune deficiency (SCID), neutropenias, phagocyte disorders, inherited disorders of the immune system and other organs are anticipated to increase the market shares over the forecast period. These increasing numbers of incidences of immune disorders are contributed by increasing harmful radiation levels on the earth resulting in mutations along with increasing stress, chemical contaminations, micro-organisms and others. According to an estimation by WHO, around 9.6 million deaths took place in the year 2018 due to cancer. The applications of stem cell in treating various types of leukemia, lymphoma and myeloma are estimated to contribute considerably in the growth of the stem cell treatment market over the forecast period.

On the back of increasing awareness in the current population regarding the storage of umbilical cord cells in treating wide range of health conditions along with growing governmental initiatives promoting storage of stem cells for chronic disease treatments is estimated to aid the growth of the stem cell treatment market during the forecast period. Moreover, the increasing rate of approval from governments in stem cell research for clinical trials and rising demand for options for regenerative treatment, the market is attributed to expand significantly over the developed and developing regions around the globe.

Additionally, rising investments in stem cell treatment research and development activities accompanied with increasing incidences of cardiovascular diseases and growing technological advancements is estimated to propel the market revenue over the forecast period.

However, stem cell treatment is repeatedly considered as alternate form of therapy due to rising ethical as well as legal issues which highlight the need for a careful regulatory framework along with rigidities between public and private models of cell banking. These factors along with the associated cost constraints in the treatment procedures using stem cells are expected to restrain the growth of the stem cell treatment market during the forecast period.

Global Stem Cell Treatment Market is further classified on the basis of region as follows: 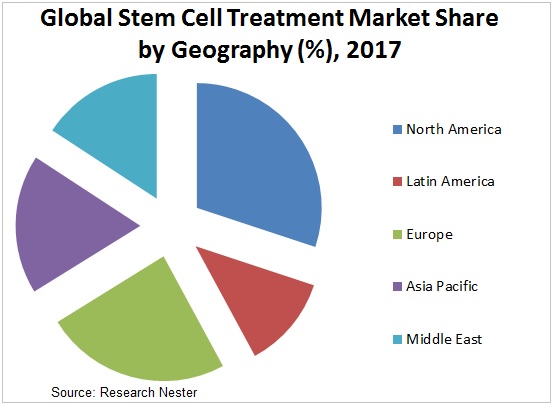