The South Africa MNO-MVNO market was valued at USD 70.61 million in 2019, and is expected to reach USD 97.73 million by 2028, by registering a CAGR of 3.7%, during the forecast period of 2020-2028. The growth of the market in the nation can be primarily attributed to the rise in the usage of smartphones, and the increasing number of mobile subscribers, which is allowing players in the telecom industry to invest into the market and offer their services. According to the statistics by the Independent Communications Authority of South Africa (ICASA), mobile penetration stood at 91.2% as of September 2019, up from 43.5% in September 2016. Further, it also stated that the total number of LTE devices per province in the country reached 27,999 units in the year 2019 from 12644 units in the year 2018. Further, increasing favorable government initiatives that support easy licensing processes for telecom operators, along with the focus of the government to increase the total spectrum availability to mobile operators, are some of the additional factors expected to drive the market growth. The telecom regulatory body of South Africa is further working on ensuring better regulations that would support greater participation from telecom operators, and are also working on developing competitive pricing for different products and services. This, as a result, is expected to create numerous opportunities for the growth of the market in the near future. Moreover, increasing number of new telecom players that are rolling out their services in the nation, along with the rapid surge in the deployment of 5G technology in the country, are also expected to boost the market growth. 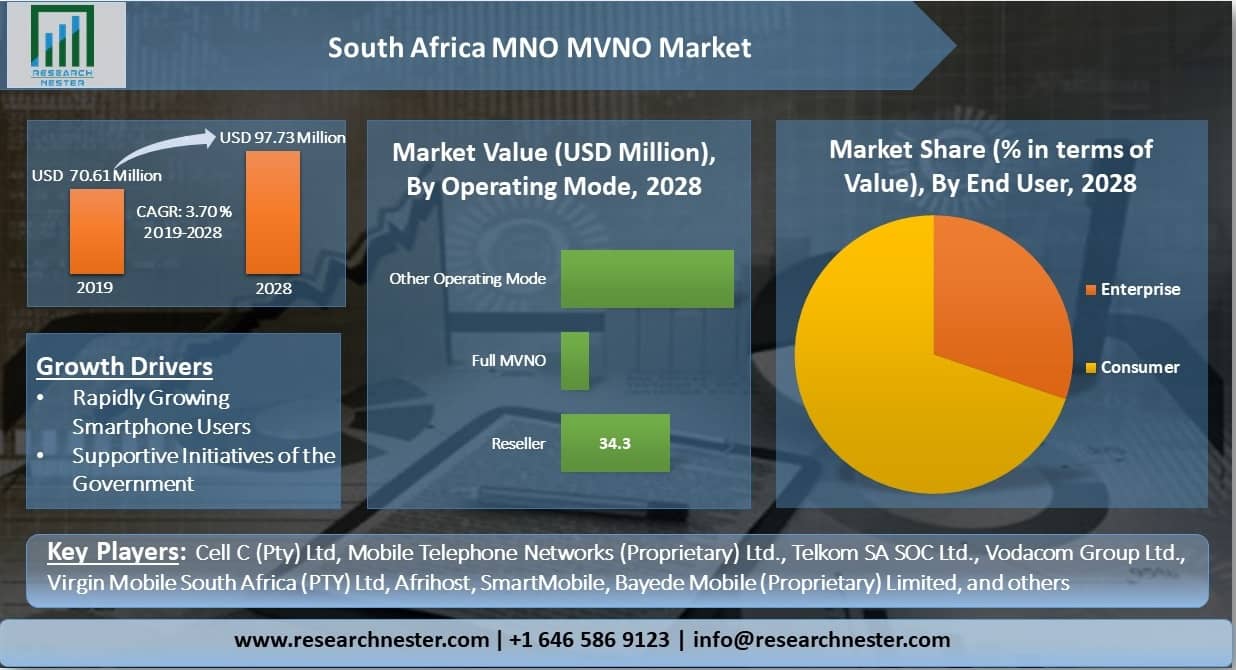 The South Africa MNO MVNO market is segmented by operating mode into reseller, full MVNO and others. Amongst these segments, the reseller segment is expected to hold a significant market share throughout the forecast period and further register a revenue of USD 34.30 million by the end of 2028. A reseller MVNO comprises of brands that markets, sells, and distributes the network throughout its established marketing channels. Although, the model does not involve other functionalities, such as activation, billing, device management, and network spectrum among others. The market is further segmented by end user into enterprise and consumer, out of which, the enterprise segment is expected to grow with the highest CAGR of 4.45% during the forecast period. The consumer segment, on the other hand, is expected to hold the largest market share throughout the forecast period, backed by the rise in the number of mobile cellular subscribers.

1) What are the major factors driving the growth of the South Africa MNO MVNO market?

Ans: Increasing smartphone penetration and favorable government initiatives are the major factors responsible for the growth of the market.

2) What would be the CAGR of South Africa MNO MVNO market over the forecast period?

3) What are the challenges affecting the South Africa MNO MVNO market growth?

Ans: High data costs in the country is estimated to act as barriers to the market growth.

5) Who are the major players dominating the South Africa MNO MVNO market?

7) What are the segments in the South Africa MNO MVNO market?

Ans: The market is segmented by operating mode and by end users.

Ans: The consumer segment is anticipated to hold the largest market size in value and is estimated to display significant growth opportunities.