The growth of the global sound masking system market is thriving on the back of growing advancement in sound technology systems which has led to the birth of sound masking systems, along with the need for silence in most public buildings and public spaces. Sound masking systems include a set of speakers, sensors and amplifiers, interconnected to each other. The speakers are installed in different places where there is a necessity to reduce unwanted noise. These speakers produce two different type of noises, namely white noise and pink noise, which makes the user present in the area to perceive as if there are no background sound distractions. Sound masking systems are widely used for places which require silence, such as offices and hospitals, as any distractions through noise reduces the level of concentration of the workers present in the environment.

The global sound masking system market reached around USD 150 million in the year 2018 and is expected to cross USD 220 million by the end of 2027 by registering a CAGR of around 5% across the globe over the forecast period 2019-2027.

The global sound masking system market is segmented by regions into North America, Latin America, Europe, Asia-Pacific and Middle East and Africa. Among these regions, the market of Europe sound masking system is driven primarily by nations such as Germany, UK, France, Spain and others, where Germany held the dominant market share of around 15% during the year 2018. The growth in the region can be attributed to the overall growth in the hotel industry backed by increasing revenue per available rooms (RevPAR) and increasing number of exhibitions being organized in hotels. Additionally, Europe is expected to expand by observing the growth rate of around 1.50x during the assessment period, which in turn is estimated to have a positive effect on the demand for sound masking systems in the long run. 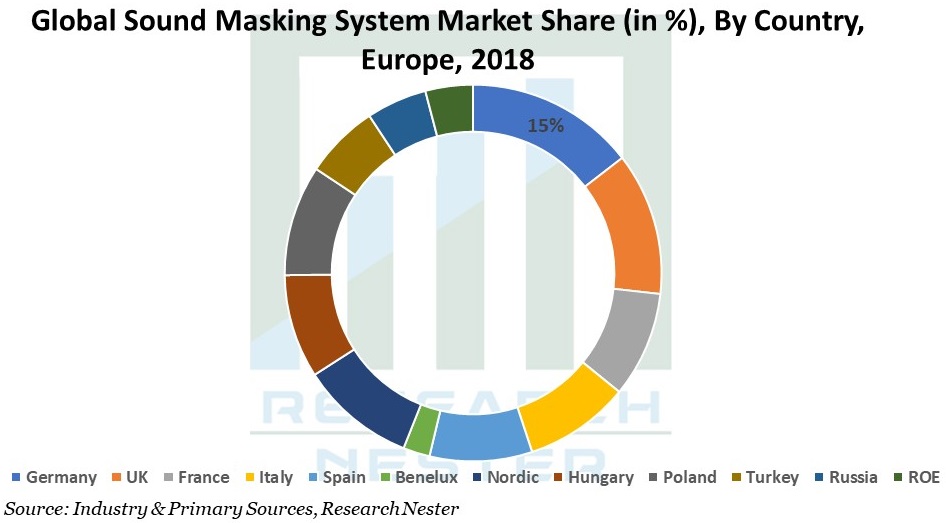 Further, U.S. and Canada are the prominent countries that are driving the growth of the North America sound masking system market where U.S. accounted for the largest market share of around 82% in the year 2017. CLICK TO DOWNLOAD SAMPLE REPORT

By Type of Technology

The global sound masking system market has been segmented on the basis of type of technology into QT100, QT200 and QT600. QT100 segment, with around 43% share in the year 2018, occupies the largest market of sound masking systems across the globe. Additionally, the QT100 segment is anticipated to cross USD 100 million by the end of 2027 and is anticipated to flourish at a CAGR of around 5% over the forecast period. 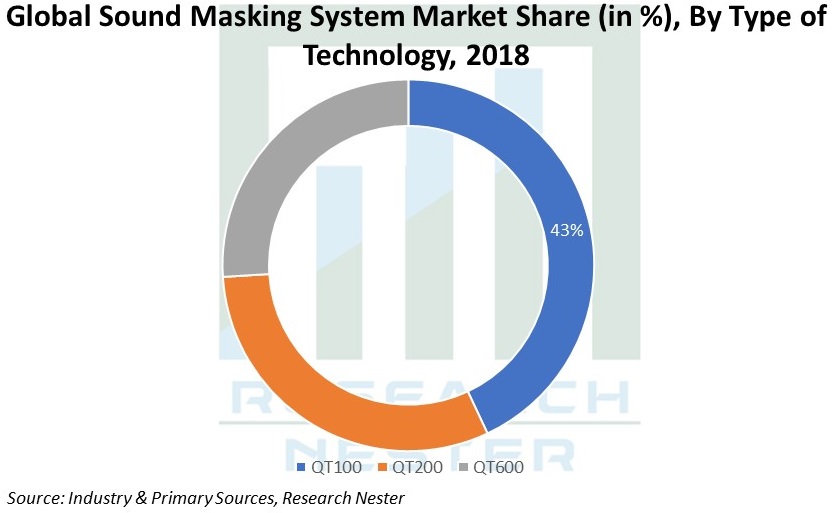 Over the years, a massive surge in the number of residential and commercial buildings have been observed which is anticipated to raise the need for the deployment of a large number of sound masking systems. Moreover, commercial and office spaces have seen a dynamic change in the design perspective. The demand for spaces which promote a calm environment has also grown significantly. Moreover, in the recent years, office spaces have transformed to follow open space policies. As such, the level of noise inside these open space offices have increased significantly owing to the conversations of the employees, which at times might be disturbing to other people, breaking their concentration. The increasing need to address such issues raises the need to deploy sound masking systems, which in turn is anticipated to drive the growth of the market throughout the forecast period.

1) What are the major factors driving the growth of the Sound Masking System market?

Ans: Increasing urbanization and the infrastructural developments, along with growing need for silent indoor premises are some of the major factors that are driving the growth of the market.

2) What would be the CAGR of Sound Masking System market over the forecast period?

4) Which region will provide more business opportunities for growth of Sound Masking System market in future?

Ans: With the presence of nations such as U.S. and Canada in North America, the region is anticipated to provide more business opportunities for the growth of the market in the future.

5) Who are the major players dominating the Sound Masking System market?

7) What are the major segments in the global sound masking system market?

Ans: The market is majorly segmented by type, by type of technology, by end user and by region.

8) What can be the significant growth opportunity for the type of technology segment in the global sound masking system market?

Ans: The QT100 segment, which is a sub-segment of the type of technology segment, held a share of around 43% in the year 2018 and is anticipated to grow at a CAGR of around 5% over the forecast period.