The global solar equipment market is projected to grow with a significant CAGR during the forecast period, i.e., 2021-2029. Factors such as the growing concern for the environmental pollution due to the electricity generated from conventional fuel sources, need amongst the nations to fight climate change and adhere to the 13th sustainable development goal (SDG) of the United Nations, coupled with the increasing government initiatives to promote awareness and adoption of solar equipment are anticipated to drive the growth of the market during the forecast period. According to the statistics by the World Meteorological Organization (WMO), CO2 concentration during the period 2015-2018 reached 404.2 (parts per million, ppm), which was an increase by 145% to the pre-industrial era. 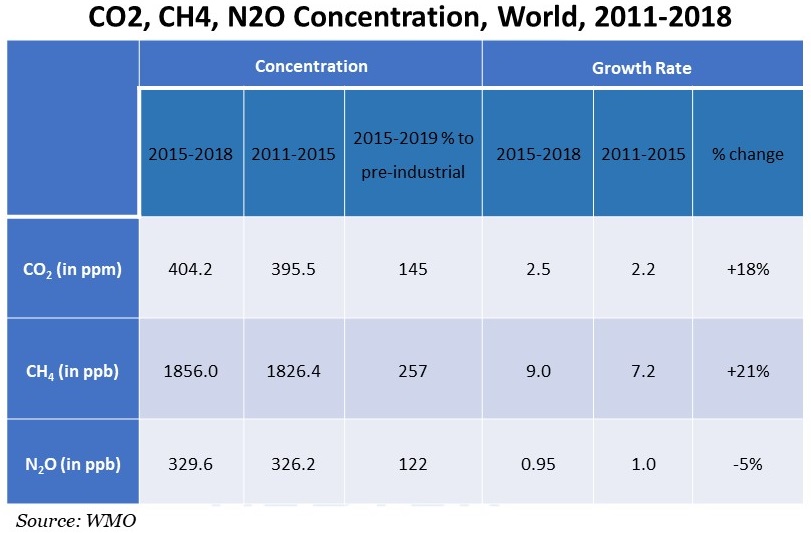 Solar equipment consists of all the devices and components that help to harness the energy from the sun. These usually include solar panels (also known as solar photovoltaic cells), energy storage systems, and other accessories. The equipment are deployed either in homes or in commercial and industrial organizations and are either tied to the grid (also known as on-grid or grid-tied solar systems) or are untied (also known as off-grid solar systems). CLICK TO DOWNLOAD SAMPLE REPORT 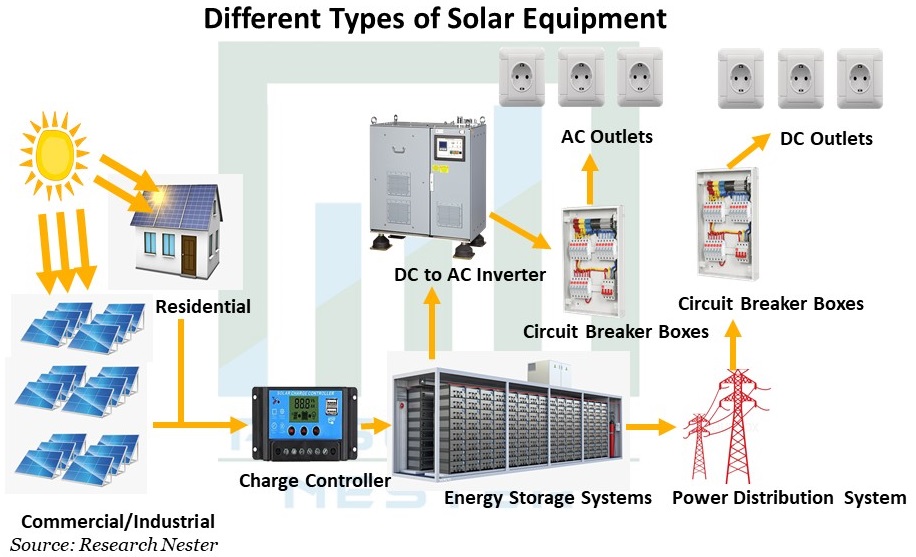 The global solar equipment market is thriving on account of the numerous benefits associated with the use of solar panel systems, such as low operational costs, lowering carbon emission, lowering energy bills, and others, along with the increasing production of solar energy. According to the statistics by International Renewable Energy Agency (IRENA), production of solar energy increased from 33813 GWh in the year 2010 to 562033 GWh in 2018. 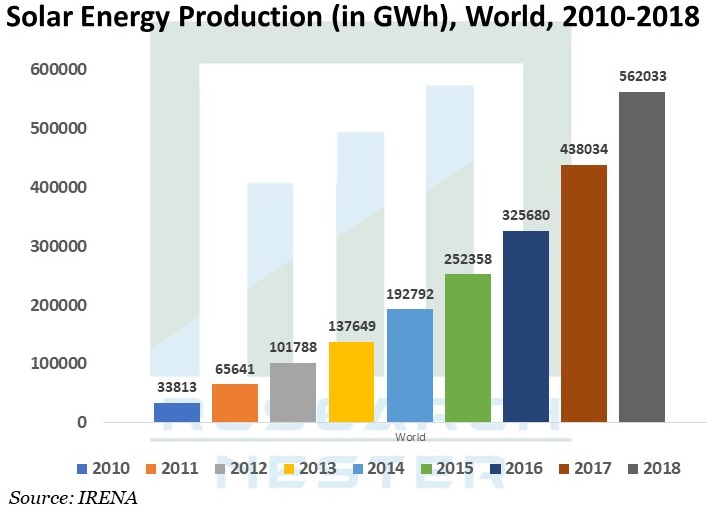 The market is segmented by type of equipment into solar panels, energy storage systems, power meters, and accessories. Among these segments, the solar panels segment is anticipated to hold the largest market share by the end of 2021. The growth of the segment can be attributed to the growing deployment of solar panels in both commercial and residential sectors. Solar panels are one of the most important equipment for the generation of solar energy. Without solar panels, solar energy can’t be harnessed. Further, the global solar panel market is also expected to grow with a significant CAGR of around 26% during 2018-2027. 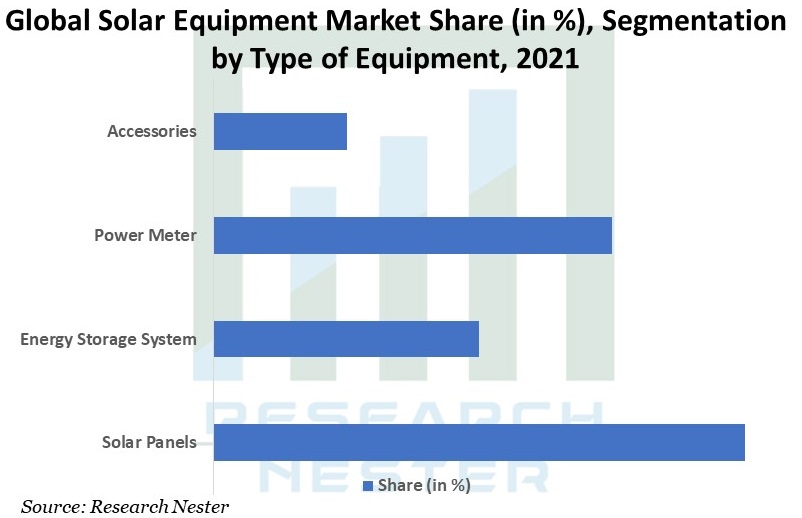 According to the statistics by the United States Energy Information Administration (EIA), 80% of domestic energy production was from fossil fuels in the year 2019. On the other hand, the World Bank, in one of its statistics stated that electricity production from oil sources grew by 1.09 times between 2010 and 2012, further registering 3.28% of total electricity production from oil sources, in the year 2015.

Electricity produced from conventional sources, mostly fossil fuels, is registered to be one of the major causes of environmental pollution. Backed by the increasing demand for electricity, there is a growing need amongst nations worldwide to shift to renewable energy sources, such as solar, wind, and hydropower among others, which is anticipated to drive the growth of the global solar equipment market during the forecast period. In other statistics by the WMO, greenhouse gas concentrations from CO2, CH4, and N2O registered to 410.5±0.2 ppm, 1877±2 ppb, and 332.0±0.1 ppb respectively in the year 2019. Further, increasing consumer awareness for solar equipment products, the growing need to reduce carbon emissions, numerous advantages of clean energy products over conventional energy products, along with the favorable government policies and programs, are some of the additional factors anticipated to drive the market growth in the coming years.

The pre-dominance of alternative sources of energy, which is also available at low costs, along with the high dependency on fossil fuels for energy, coupled with the operating limitations of solar systems, as in most nations full operating capacity is expected to limit to only 4-5 hours, are some of the factors anticipated to hamper the market growth.

Our in-depth analysis of the global solar equipment market includes the following segments:

By Type of Equipment

On the basis of regional analysis, the global solar equipment market is segmented into five major regions including North America, Europe, Asia Pacific, Latin America, and the Middle East & Africa regions. Among these regions, the market in North America is projected to hold the largest market share by the end of 2029. The growth of the market in the region can be attributed to the growing deployment of solar farms in several nations in the region, followed by the lucrative federal tax credit incentives initiated by the government of the U.S. for the greater adoption of solar equipment. Alternatively, the market in the Asia Pacific is projected to grow with the highest CAGR during the forecast period, backed by the growing awareness amongst the customers, and the rising concern for the environment.

The global solar equipment market is further classified on the basis of region as follows:

What are the major factors driving the growth of the solar equipment market?

Growing concern for environmental pollution, and the rising awareness amongst customers for the benefits associated with the adoption of solar systems, are some of the major factors driving the market growth.

What would be the CAGR of solar equipment market over the forecast period?

Who are the major players dominating the solar equipment market?

Which region is anticipated to hold the dominating share in the solar equipment market?

The market in North America is projected to hold the dominating share by the end of 2021 owing to the lucrative federal tax credit incentives initiated by the government of the U.S., and the rising adoption of solar farms in the region.

What are the segments in the solar equipment market?

The solar equipment market is segmented by solar system type, type of equipment, end-user, and by region.

Which segment under type of equipment segment is projected to hold the dominating share in the solar equipment market?

The solar panels segment is projected to hold the dominating share by the end of 2021, backed by the increasing demand for solar panels by the end-users.

The available of low-cost alternatives and the high dependency on fossil fuels for energy are some of the major factors estimated to act as barriers to the growth of the market.