The global solar charge controller market is estimated to grow at a CAGR of ~15% over the forecast period, i.e., 2022 – 2030. The growth of the market can be attributed to the increasing need to control the voltage and power supply from the solar panels. Solar charge controllers are primarily used in off-grid solar panels, to regulate the flow of energy into the batteries. The rising adoption of solar energy across the world, has led to the demand for a controller system to regulate the working of these panels. The growing awareness for the use of clean and renewable energy to curb the rising pollution level is a major growth driver for the market. Moreover, the increasing prominence of utility of solar energy on residential scale is expected to boost the market growth. According to the data by the International Energy Agency (IEA), solar power generation crossed 720 TWh in 2019, registering a growth of 22% from last year. 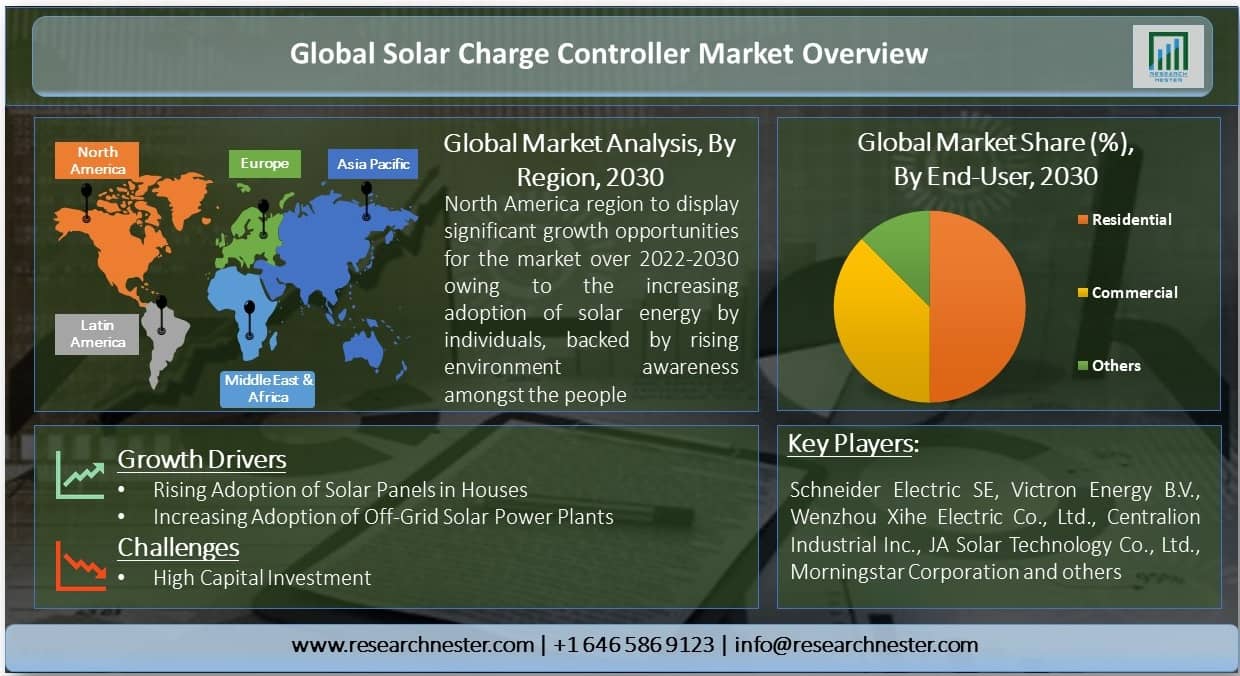 The market is segmented by end-user into residential, commercial, and others, out of which, the residential segment is anticipated to hold the notable share in the market over the forecast period as most residential usage of solar power plants is off-grid, which requires charge controllers for proper functioning. Solar charge controllers transform and control the flow of the current generated from solar panels and pass it to the connected batteries. This prevents the batteries from over charging and discharging. This is estimated to boost the growth of the market.

On the basis of geographical analysis, the global solar charge controller market is segmented into five major regions including North America, Europe, Asia Pacific, Latin America and Middle East & Africa region. The market in North America region is estimated to grab major share over the forecast period on the back of increasing adoption of solar farms as a commercial activity, and technological advancement in the region. According to the data by the U.S. Energy Information Administration (EIA), there were more than 2,500 utility scale solar power plants in the U.S. in 2018. This is estimated to raise the demand for solar charge controller in the region.

The market in the Asia Pacific is estimated to record highest CAGR in the forecast period owing to the growing adoption of renewable energy sources, especially solar energy, in countries such as China, India, Japan, and Thailand. China currently is the largest producer of solar energy in APAC region. The growing adoption of solar power plants, is estimated of positive influence the solar charge controller market. 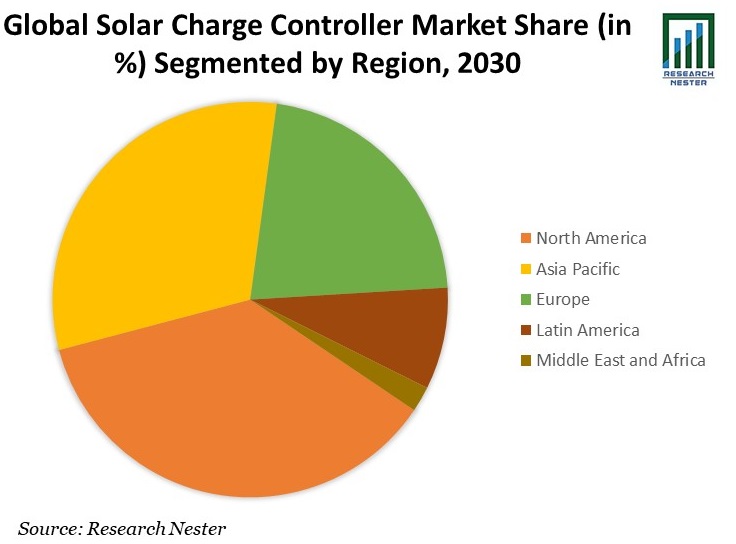 The global solar charge controller market is further classified on the basis of region as follows:

1) What are the major factors driving the growth of the solar charge controller market?

Ans: Increasing adoption of solar energy, and installment of solar panels in houses to boost the market growth.

2) What would be the CAGR of solar charge controller market over the forecast period?

4) Which region will provide more business opportunities for growth of solar charge controller market in future?

Ans: The market in North America is estimated to garner the largest market share owing to the large number of successful solar farms already functioning in the region, which creates further growth opportunities.

5) Who are the major players dominating the solar charge controller market?

7) What are the segments in the solar charge controller market?

Ans: The market is segmented by type, end-user, and by region.

8) Which segment captures the largest market size in end-user segment in the solar charge controller market?

Ans: The residential segment is anticipated to hold largest market size over the forecast period and display significant growth opportunities.