The global soft tissue allografts market is estimated to garner a revenue of ~USD 7 Billion by the end of 2031 by growing at a CAGR of ~7% over the forecast period, i.e., 2022 – 2031. Further, the market generated a revenue of ~USD 4 Billion in the year 2021. The growth of the market is primarily attributed to the increasing trauma cases, and rising number of geriatric population. As per the World Health Organization (WHO), globally, the number of people over the age of 60 is projected to reach 1.4 billion by 2030. 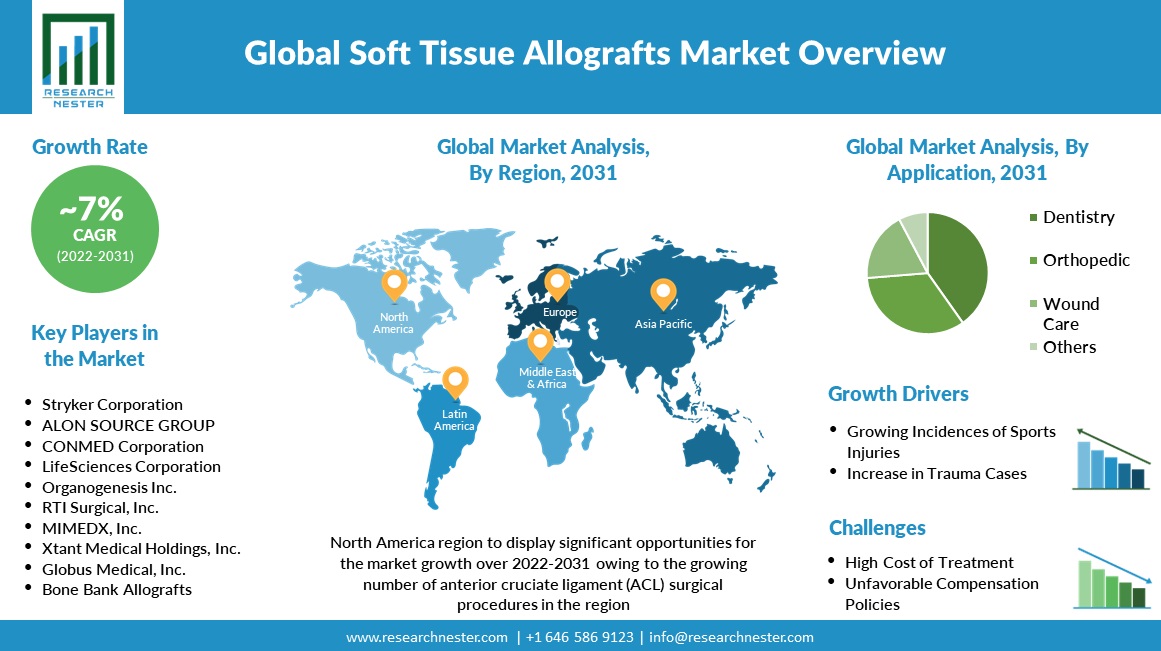 Allograft tissue is a tissue that has surgically implanted from one person to another. Soft tissue allografts are the replacement tissues used in anterior cruciate ligament (ACL) to repair damaged ligament, torn menisci, osteochondral defects, and spinal surgery. Utilization of allografts for soft tissue reconstruction results in less donor tissue site mortality and relatively short surgical time. Therefore, the increasing count of anterior cruciate ligament (ACL) sprains and tears is fueling up the growth of the soft tissue allografts market. For instance, in the United States, the prevalence rate of ACL sprains and tears ranges from 110,000 to 226,000 per year.

The global soft tissue allografts market is segmented and analyzed for demand and supply by application into orthopedic, dentistry, wound care, and others, out of which, dentistry segment is estimated to significantly grow over the forecast period owing to the rising number of tooth loss in aging population, and tooth related issues i.e., replacement of missing teeth in people that require an effective treatment. For instance, until 2019, around 4 million people in the United States alone had dental implants, and this number is expanding by 520,000 annually.

Regionally, the global soft tissue allografts market is studied into five major regions including North America, Europe, Asia Pacific, Latin America and Middle East & Africa region. Amongst these markets, the market in North America is projected to hold the largest market share by the end of 2031 backed by the rising prevalence of diabetic foot ulcers, growing number of anterior cruciate ligament (ACL) surgical procedures, and rising healthcare expenditure in the region. As per the data provided by the Centers for Medicare & Medicaid Services, healthcare spending in the United States is expected to ascend 5.1% between 2021 to 2030, reaching nearly USD 6.8 trillion by 2030. 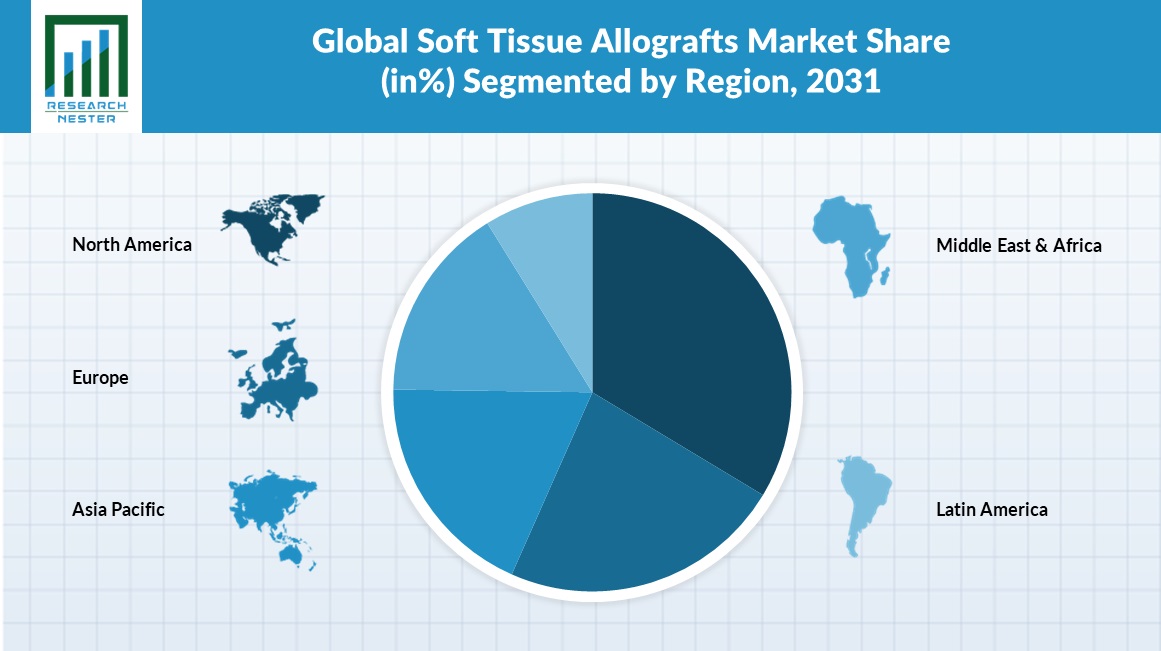 The global soft tissue allografts market is further classified on the basis of region as follows:

What are the major factors driving the growth of the soft tissue allografts market?

Growing incidences of sports injuries, rising prevalence of osteoarthritis, increase in trauma cases, and upsurge in musculoskeletal diseases are some major factors driving the growth of the market.

What would be the CAGR of soft tissue allografts market over the forecast period?

What are the challenges affecting the soft tissue allografts market growth?

High cost of treatment, unfavorable compensation policies, and lack of skilled personnel are estimated to hamper the market growth.

Which region will provide more business opportunities for growth of soft tissue allografts market in future?

Who are the major players dominating the soft tissue allografts market?

What are the segments in the soft tissue allografts market?

Which segment captures the largest market size in application segment in the soft tissue allografts market?

The dentistry segment is anticipated to garner the largest market size by the end of 2031 and display significant growth opportunities.