The global soft ferrite market is estimated to garner a large revenue and grow at a CAGR of ~4% over the forecast period, i.e., 2022 – 2030. The growth of the market can be attributed to the increasing usage of soft ferrite in electronics for automobiles, growing investments in power distribution sector, and large-scale application of the compound for the manufacturing of high-frequency transformers. In addition, soft ferrite is gaining huge popularity since the last few years as a result of its superior magnetic characteristics, ability to alter magnetization and high electrical resistance. This is considered to be a crucial factor projected to offer abundant growth opportunities to the market in the near future. Furthermore, rising production of electric vehicles, and increasing manufacturing activities in developed and emerging economies are also expected to drive market growth in the upcoming years.  According to the International Energy Agency, total number of electric cars on the road were 17,000 in 2010 which increased up to 7.2 million by 2019. The total sales of electric cars increased by 6 percent from 2018 to 2019. 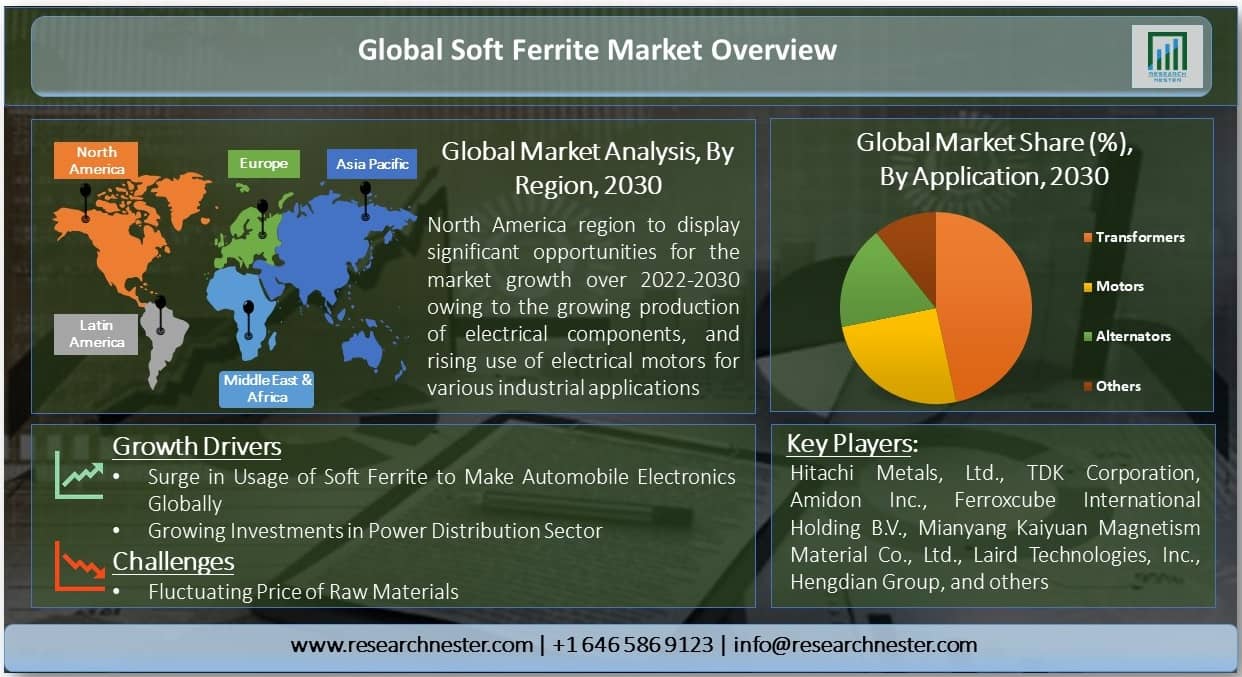 The market is segmented by application into transformers, motors, alternators, and others, out of which, the motors segment is anticipated to hold the largest share in the global soft ferrite market on account of the large-scale usage of electric motors in various end user industries such as medical equipment, consumer electronics and electric vehicles. Along with this, soft ferrite is widely being adopted to produce motors of high efficiency with lower consumption costs, which is also assessed to boost the growth of the segment by the end of 2030. The segment for transformers is also predicted to gather a significant market share during the forecast period owing to the increasing venture funding for finding premium quality materials for transformer core. Additionally, on the basis of product, the segment for Mn-Zn ferrite, or manganese coupled with zinc ferrite, is assessed to acquire the largest share over the forecast period in view of its extensive utilization in the electrical industry as a result of its higher permeability and saturation levels than nickel zinc ferrite.

On the basis of geographical analysis, the global soft ferrite market is segmented into five major regions including North America, Europe, Asia Pacific, Latin America and the Middle East & Africa. The market in the North America is estimated to witness noteworthy growth over the forecast period on the back of the rising production of electrical components in the region. Apart from this, growing use of electric motors for a variety of industrial applications such as refrigeration, pumping, compressed air and material processing, is also expected to expand the market in the region in the coming years. Moreover, the market in Asia Pacific is projected to occupy the largest share during the forecast period, which can be credited to the increasing demand for electricity, rapid population growth and growing industrialization in the region. For instance, the electricity consumption in China was more than 7500 terawatt hours in 2020, up from about 7225 terawatt hours in 2019. The total electricity consumption in this nation has only observed a hike since 2010.

The global soft ferrite market is further classified on the basis of region as follows:

Our in-depth analysis of the global soft ferrite market includes the following segments:

1) What are the major factors driving the growth of the soft ferrite market?

2) What would be the CAGR of soft ferrite market over the forecast period?

3) What are the challenges affecting the soft ferrite market growth?

Ans: Fluctuating prices of raw materials is estimated to hamper the market growth.

4) Which region will provide more business opportunities for growth of soft ferrite market in future?

Ans: North America will provide more business opportunities for market growth owing to the rising production of electrical components in the region.

5) Who are the major players dominating the soft ferrite market?

7) What are the segments in the soft ferrite market?

Ans: The market is segmented by product, application, end user, and by region.

8) Which segment captures the largest market size in the application segment in the soft ferrite market?

Ans: The motor segment is anticipated to hold largest market size and is estimated to grow at a notable CAGR over the forecast period and display significant growth opportunities.