The global sodium silicate market is estimated to gain a significant amount of revenue and grow at a moderate CAGR over the forecast period, i.e., 2021-2029. The growth of the market can be attributed to the growing requirement of sodium derivatives in several application industries, increasing demand for green tires and the rising number of activities for recycling waste paper worldwide. Furthermore, sodium silicate is the primary source of reactive silica, owing to which there is an increasing demand for its derivatives which is expected to push the market forward in the coming years. Additionally, the imposition of nationwide lockdowns as a result of COVID-19 pandemic has offered new possibilities to detergent manufacturers on the back of growing demand for hygiene products such as soaps, sanitizers and detergents. This is led to the wide expansion of the sodium silicate market in 2020.

The global sodium silicate market is segmented based on application into detergents, precipitated silica, catalysts, pulp & paper, elastomers, and food & healthcare. Out of these, the largest market share will be observed by detergents, out of which the detergents segment is estimated to grow with the highest CAGR over the forecast period. This can be credited to the property of sodium silicate to be an efficient cleaner due to which it finds many uses various industries such as cleaning, textiles, bleaching and degumming, which in turn is projected to fuel the market growth in the near future. However, the segment for precipitated silica garners the largest share owing to the high usage of sodium silicate for producing silicone rubber compounds. 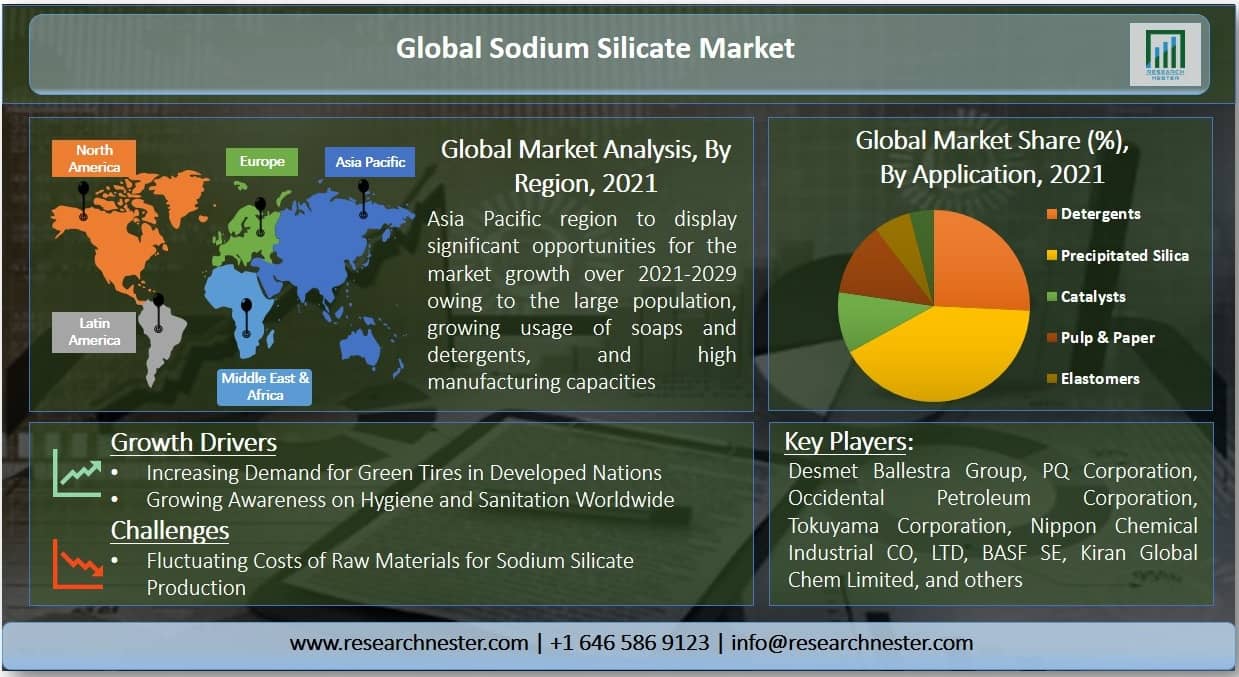 On the basis of geographical analysis, the global sodium silicate market is segmented into five major regions including North America, Europe, Asia Pacific, Latin America and the Middle East & Africa. The market in the Asia Pacific region is estimated to grab the largest market share and witness noteworthy growth over the forecast period. Moreover, since the last few years, APAC has observed an increase in awareness regarding hygiene and sanitation. Currently, more people are using soaps and detergents of which, sodium silicate is an important constituent. As a result of a large population of this region, the demand for detergents is also assessed to grow, which is expected to boost the growth of the market in the near future. Furthermore, Europe is expected to be the second most prominent market for sodium silicate during the forecast period attributing to the growing demand for sodium silicate in paper & pulp and a strong presence of healthcare industries in the region. The paper recycling rate in Europe increased to more than 72% in 2019, up from 68% in 2019. CLICK TO DOWNLOAD SAMPLE REPORT 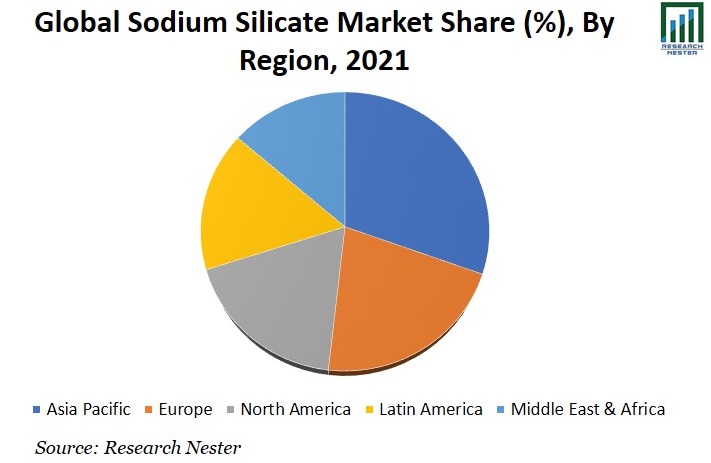 The global sodium silicate market is further classified on the basis of region as follows:

Our in-depth analysis of the sodium silicate market includes the following segments:

1) What are the major factors driving the growth of the sodium silicate market?

Ans: Growing demand for green tires and rising awareness about hygiene and sanitation are estimated to drive market growth.

2) What would be the CAGR of sodium silicate market over the forecast period?

3) What are the challenges affecting the sodium silicate market growth?

Ans: High costs of raw materials and transportation of sodium silicate are estimated to hamper the market growth.

4) Which region will provide more business opportunities for growth of sodium silicate market in future?

Ans: Asia Pacific region will provide more business growth opportunities on the back of increasing usage of soaps and detergents in the region.

5) Who are the major players dominating the sodium silicate market?

7) What are the segments in the sodium silicate market?

Ans: The market is segmented by application, form, and by region.

8) Which segment captures the largest market size in the application segment in the sodium silicate market?

Ans: The precipitated silica segment is anticipated to hold largest market size and is estimated to grow at a modest CAGR over the forecast period and display significant growth opportunities.