A smoke grenade is a small bomb inside a canister-type body that produces a thick smoke when it explodes but is non-lethal or less-lethal in nature. They serve various purposes but most commonly it is used in the ground-to-ground or ground-to-air signaling process, as a screening device, and target device for the movement of armed forces by creating a visual distraction that deceives the enemy fire temporarily.

The global smoke grenade market is anticipated to attain a notable CAGR during the forecast period, i.e., 2020-2028. The market is segmented by product type, end-user, and region. Among end-user segmentation, the military and defense segment is anticipated to hold the largest market share during the forecast period owing to smoke grenade’s preferences in both military and naval operations for their concealing and camouflaging properties on the battlefields, capability of releasing a huge amount of smoke and imparting a thicker screen for rapid movement of soldiers. 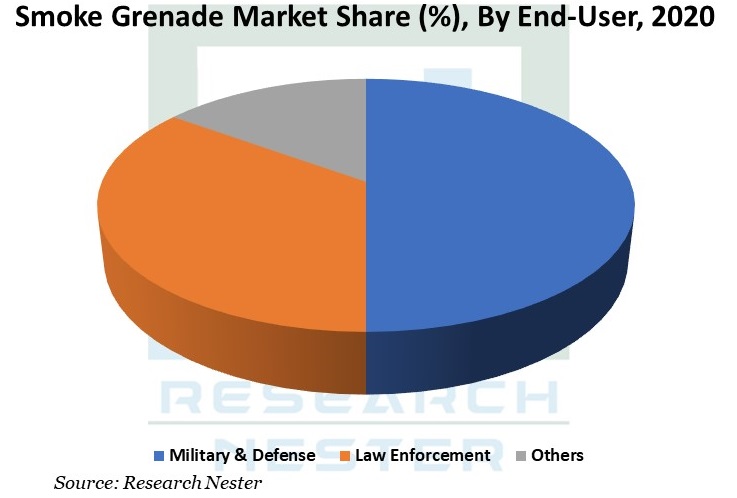 Increasing utilization of smoke grenades for controlling the riots and protests

Huge demand for the smoke grenade is created due to rising civil turmoil and internal terrorism in various parts of the globe.

To control the occurrences of violent protests and civil turmoil without the use of lethal force, smoke grenades are heavily preferred by law enforcement bodies, which is expected to boost the demand for the smoke grenade in the forecast period. CLICK TO DOWNLOAD SAMPLE REPORT

Additionally, technological advancements have led to the creation of new generation smoke grenades that are less lethal and handheld. The technology might help in creating light weights and effective grenade launch systems which will further strengthen the market growth.

Toxic pollution and safety risks might hinder the growth

There have been cases of accidental explosions and there is a significant risk of toxic contamination due to smoke grenades. These factors is anticipated to attribute towards the slow market growth of smoke grenades during the forecast period.

Our in-depth analysis of the global smoke grenade market includes the following segments:

North America is estimated to account for the largest market share owing to huge investments in the smoke grenade market by the companies operating in the U.S. and Canada, and substantial use of diverse non-lethal weapons by law administering bodies to monitor the violent gatherings. The U.S. is the home to most of the major companies in the market.

Europe is anticipated to witness significant growth during the forecast period owing to increasing demand for the smoke grenade. This is attributed to the rise in the number of riots and hostile troubles.

Asia-Pacific is estimated to come up as the fastest-growing region during the forecast period. This is primarily attributed to the increase in crowd management situations resulting from civil unrest and violent protests in countries, such as India, China, and South Korea. These countries have witnessed huge government spending on defense equipment and promoting air transport which requires smoke grenade.

Growing occurrences of protests and riots in some areas of the Middle East and Africa has contributed towards the demand for the smoke grenade to control civil unrest in these regions.

The global smoke grenade market is further classified based on region as follows: