Smart Food Scale Market Segmentation by Type (Mechanical, and Electronic Food Scale); by Material (Stainless Steel, Glass, and Others); by Weight (Below 50 lb, 50 – 100 lb, 100 – 200 lb, and Above 200 lb); and by Distribution Channel (Online and Offline ) – Global Demand Analysis & Opportunity Outlook 2030

The global smart food scale market is estimated to garner a notable amount of revenue by growing at a robust CAGR over the forecast period, i.e., 2022 – 2030. The growth of the market can be attributed largely to the growing desire of people to lead a healthier lifestyle. In 2019, the total number of consumers following clean eating witnessed an increase of 10 percent in the United States alone, whereas the consumer base of ketogenic diets increased by 6 percent that same year.

More and more people worldwide are taking up serious steps to improve their eating habits, one of which includes measuring amount of nutrients in the food prepared. This is expected to create a potential demand for the usage of smart food scales in the near future. Along with these, increasing consumer emphasis on body physique, well-being and better physical appearance is projected to offer rewarding business opportunities for the market on a global level. Rising adoption of technological advancements to synchronize smart food scales with intelligent apps is also assessed to open new avenues for market expansion. 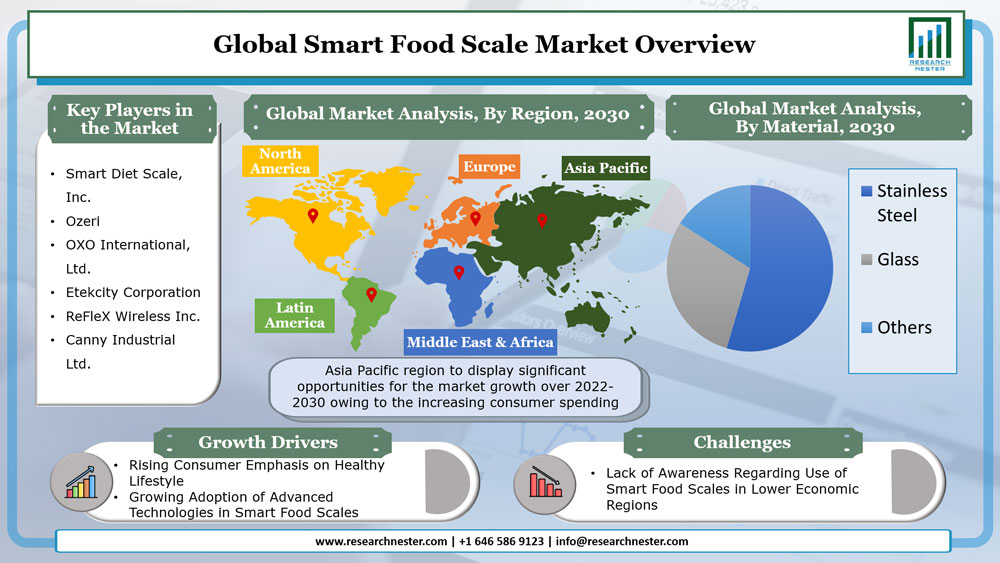 The market is segmented by weight into below 50 lb, 50 – 100 lb, 100 – 200 lb, and above 200 lb, out of which, the below 50 lb segment is anticipated to hold the largest share in the global smart food scale market. Most of the digital nutrition scales available around the world are manufactured to measure weights of less than or up to 50 lb as those are usually sufficient in weighing ingredients accurately for food items.

Furthermore, on the basis of material, the stainless-steel segment is evaluated to occupy a significant market share owing to the high durability, superior tensile strength and corrosion resistance of steel. Apart from these, attractive appearance and low maintenance required by steel kitchen scales is also predicted to boost the growth of the market segment in the imminent time. In addition, based on type, the segment for electronic food scale is expected to account for the largest share over the forecast period ascribing to the surging integration of Bluetooth technologies in app-based smart food scales, which are gaining massive popularity since the recent years. CLICK TO DOWNLOAD SAMPLE REPORT

On the basis of geographical analysis, the global smart food scale market is segmented into five major regions including North America, Europe, Asia Pacific, Latin America and the Middle East & Africa region. The market in North America is projected to grab the largest share during the forecast period, which can be credited to the high manufacturing base, and spiralling health concerns amongst the population, especially the elderly. Apart from these, significant adoption rate of smart technology is also anticipated to augment the sales of smart food scales in the region in the future. Moreover, the market in the Asia Pacific region is estimated to witness noteworthy growth over the forecast period owing to the growing consumer spending, and increasing number of gyms and yoga centers in China, India, Japan, South Korea and other Southeast Asian countries. In addition, rising trend of wellness and healthy eating among the people is also expected to drive the region’s market growth in the coming years. As per the data published by the World Bank, the consumption expenditure in Malaysia has grown up to 73.881 percent of GDP in 2020, up from 71.516 percent and 69.383 percent of GDP shares in the years 2019 and 2018 respectively. 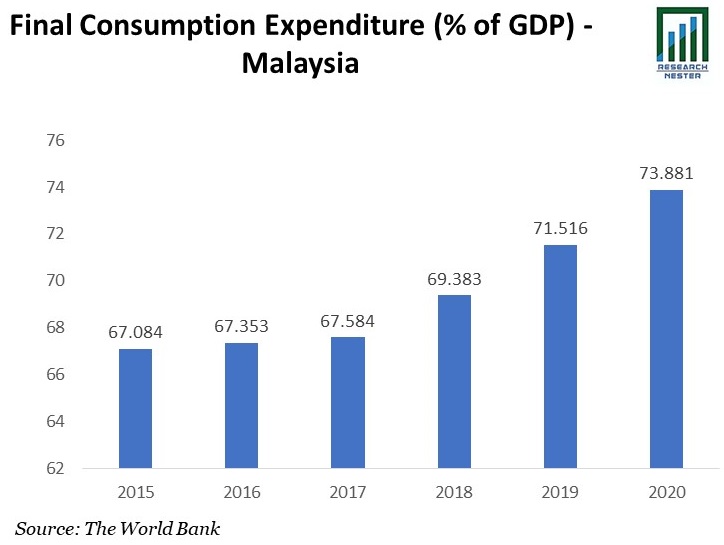 The global smart food scale market is further classified on the basis of region as follows:

What are the major factors driving the growth of the smart food scale market?

The major factors driving market growth are growing desire of people to lead a healthier lifestyle and rising adoption of technological advancements to synchronize smart food scales with apps.

What would be the CAGR of smart food scale market over the forecast period?

What are the challenges affecting the smart food scale market growth?

Less awareness about the usage of smart food scales in lower economic regions is estimated to hamper the market growth.

Which region will provide more business opportunities for growth of smart food scale market in future?

Who are the major players dominating the smart food scale market?

What are the segments in the smart food scale market?

The market is segmented by type, material, weight, distribution channel, and by region.

Which segment captures the largest market size in the material segment in the smart food scale market?

The stainless-steel segment is anticipated to hold largest market size and is estimated to grow at a noteworthy CAGR over the forecast period and display significant growth opportunities.