As we speak, smart clocks are well on their way to begin another chapter in the alarm clocks industry. To begin with, a smart clock is a device that assists individuals to rise and shine or simply get going every single day without having to use their hands. It is also to be noted that, apart from the fact that smart clocks play the role of waking up the individuals and helping them start their day, these devices offer a host of other features that are embedded into them. Be it a music player, providing news updates or the option of controlling one’s device through one’s voice, all of these features are adding glamour to this charming device.

As far as the history is concerned, waking up to alarms is not a new concept as people have been waking up every morning with the help of alarms from several years. Be it the early 14th century that saw the emergence of clock towers in Europe or the user-settable mechanical alarm clocks of the 15th century, alarm clocks have continued to play an important role in our lives and are not uncommon at homes today. The alarm clocks found their way into the bedrooms of individuals as they play an important role in time management pertaining to our responsibilities among other duties.

The consumer electronics industry with its niche over creating technologically advanced products at a rapid pace have literally marked the times we are currently living in and we are left with our deep rooted imaginations to ponder over how it will re-define the way of living over the future.

The global smart clock market is estimated to attain significant market size and is projected to expand at a CAGR of around 26% over the forecast period (2020-2027). The growth of the market can be attributed to growing technological advancements and the notable features provided by these devices.

The market is currently segmented on the basis of distribution channel and region. Online segment that forms part of distribution channel has performed well as of 2018 and is expected to perform significantly well over the forecast period. This can be attributed to growing number of internet users across the globe, especially in the developed nations. CLICK TO DOWNLOAD FREE SAMPLE

With the boom in internet of things (IoT) and AI (Artificial Intelligence), the market for smart clocks is anticipated to witness a significant growth over the forecast period. This bedside companion has evolved with time by cementing its position firmly by adding many features such as cuckoos sounds, snoozes and others along with its utilization through our phone apps and its control via gestures.

The increasing awareness about the significance of smart devices and the role they play in an individual’s life is driving the demand for luxury household products such as smart clocks. Besides telling the time, the smart clocks are used to perform several tasks that include wireless charging of cell phones, providing traffic reports, weather forecast and placing calls among other attributes. These factors are estimated to drive the demand for the smart clocks in upcoming years. Additionally, the rising disposable income among large segments of the population is estimated to support the growth of the market.

The smart clocks, despite offering a host of several benefits continue to suffer from some limitations such as lack of availability of smart home controls as compared to other smart display devices.

Our in-depth analysis of the global smart clocks market includes the following segments:

The North American region occupied the largest market share in 2018 and is expected to retain its leading position throughout the entire forecast period owing to the increasing number of smartphone users and the higher purchasing power of consumers. The market in Asia Pacific region is touted to be the fastest growing market owing to a steady rise in the number of individuals using smartphones and smart home appliances. 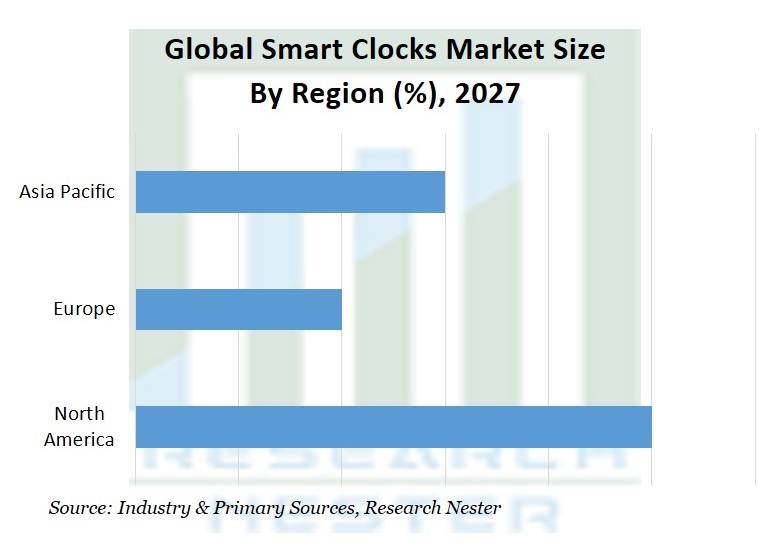 Moreover, the industry participants are also incorporating latest technologies in their products which is brightening their prospects for manifesting substantial growth of the market over the forecast period.