Small caliber ammunitions are of .50 caliber or below. The different caliber ammunitions are used for different applications depending on the end use, with some companies even providing customization as per the customer demand. The conventional ammunitions were restricted only to the firing by using rifles, guns and other weapons. However, the recent developments have resulted in the development of low weight cases, reduced range, ammunitions with luminance trace which are one-way, next generation projectiles and many others. At present, there are mainly three categories of small caliber which are in use such as war reserve ammunitions for combat operations, training standard ammunitions for both training as well as operational purposes and training unique ammunitions for only training purposes and can’t be used in combat. The developments are being made to ensure the benefits to soldier in terms of mobility, lethality, survivability and edge over the enemy.

The global small caliber ammunition market is anticipated to record a CAGR of around 3.2% over the forecast period i.e. 2019-2027 owing to increasing civil conflicts, terrorist attacks, crime rate and wars leading to increasing demand for guns for self-defense and military purposes. The increasing rate of terrorist activities and recent attacks on Sri Lanka and New Zealand has propelled the governments to invest more in military and defense sector to ensure public and general safety. The technical upgradations and constant developments have resulted in the provision of high-tech next generation ammunitions for defense and military purposes. The governments are heavily investing in their militaries to provide improved defense equipment and services which is expected to result in expansion of small caliber ammunition market.

The market is segmented by gun type, application and caliber. The market is segmented into handgun, rifles, shotgun and others on the basis of gun type, out of which, the handgun segment is anticipated to have maximum market share on account of their use in both military and self-defense applications coupled with their use in sports and hunting. The handgun are available in wide range depending on the end application with variations available in their material and design in accordance to the users. The new advancements in handguns for instance, 3D printed guns have made it possible to produce the guns by direct metal laser sintering method which does not damage the gun when bullets are fired. The application segment is further segmented into self-defense, military/armed forces, government agencies and hunting & sports, out of which military/ armed forces segment is expected to have leading share in the revenue on the back of increasing border tensions between the countries, recent terrorist attacks and rising crime rate, the governments are investing significantly in their militaries to empower them. The segment is followed by hunting and sports segment, which is expected to stand at second position on account of inclination of people towards hunting and various shooting sports, some of countries organize hunting trophies for tourist attraction and revenue generation. The caliber segment is further sub segmented into 5.6mm, 9mm, 7.62mm, 12gauge, .22lr, .223rem, .308caliber and others, out of which, the 12 gauge segment is anticipated to witness significant growth on the back  their use in self-defense, shooting and hunting activities. The 12 gauge small caliber guns are highly used for various commercial purposes owing to their easy availability and cost effectiveness. 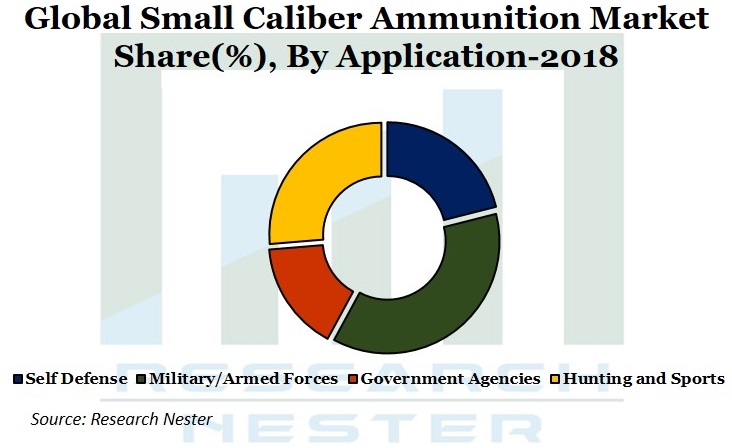 The increasing crime rate and regional conflicts among the countries have resulted in the demand for ammunitions for military and self-defense purposes. The increasing global unrest has augmented the governments to adopt for high end defense materials to empower public as well as armed forces.

The integration of IT to provide better targeting and high impact is expected to drive the market growth. The automation in reconnaissance, surveillance, and target acquisition has developed such systems which have integrated computer systems for technical and tactical fire control. Rockwell Collins has developed the system which is capable of providing digital fire solutions which enable the digital calls to be used for indirect fires on mortar, range systems and artilleries. The systems provide quick reactions, all the resources of fire are synergized and integration with army’s control system and computing.

The small caliber ammunitions are made of various raw materials, which are exported and imported from different countries, the fluctuations in the global prices of these materials is expected to slow down the trade which is further projected to restrict the production and usage of these ammunitions. Additionally, the stringent rules and regulations imposed by the governments on their usage by the civilians for self-defense and difficulties in getting gun license are expected to hinder the market growth during the forecast period.

North America is anticipated to contribute substantially in the global revenue during the forecast period owing to the presence of key market players coupled with low government restrictions in use of self-defense guns and ease of getting license in the region. Additionally, the government and private companies are highly investing in generating the technologies that could support the military and armed forces. Europe is expected to have second largest market share followed by Asia-Pacific on the back of rising shooting and hunting activities coupled with increasing rate of self-defense against the crime rate. Asia-Pacific is expected to witness significant growth owing to the increasing terrorist activities in the region coupled with rising territorial conflicts between the countries. The countries for instance, India, China and Japan are constantly investing in their military sector owing to the border issues with neighboring countries.

The global small caliber ammunition market is further classified on the basis of region as follows: