These ammunitions have been in use since 16th century with improvements being done time to time to cater the military demands and secure the national interests. There are wide range of artillery ammunitions available from mortars to recoilless guns ammunitions depending on their application and type.

The global artillery ammunition market is anticipated to record a CAGR of around 5% over the forecast period i.e. 2019-2027 owing to increased demand for better military facilities against terrorism, increasing geopolitical issues and regional conflicts and warfare. The technical up gradations and constant developments have resulted in provision of high tech next generation ammunitions for defense and military purposes. The governments across different countries are heavily investing in their militaries to provide improved defense equipment and services which is expected to result in expansion of artillery ammunition market.

The market is segmented by type, application, caliber and range.  The type segment is further segmented into howitzer [self-propelled, towed], mortar [self-propelled, towed], anti-air [air defense gun, counter rocket artillery and mortar (cram)] and others [naval, coastal] out of which, the howitzer segment is anticipated to have leading shares on account of high adoption of these ammunitions in military. The howitzers are capable of providing both direct and indirect fires, need low maintenance, and are highly cost effective. The ease of operating, movability, provision of smoke cover coupled with proper illumination and suppression fire are expected to drive the market growth during the forecast period. On the basis of the caliber segment, the market is further segment into small caliber, medium caliber and heavy caliber, out of which the medium segment is anticipated to have leading market shares on the account of their increasing demand for various applications, the ammunitions are available in wide spectrum so as to cater the required demand. The medium ammunitions provide high accuracy, huge lethality and extreme penetration resulting in immense threat in the battleground. The range segment is further segmented into short, medium and long, out of which the medium segment is anticipated to witness significant growth on the back of their high ballistic properties to carry out operations efficiently. The reduced maintenance, better projectiles and trajectory, improved tracer visibility and elimination of contamination of environment are expected to boost the market growth.

The recent events and attacks on countries has risen the need to adopt measures that protect the national interests and public. The increasing territorial tensions coupled with rise in rate of terrorism is expected to increase the product demand during the forecast period. The countries are developing new technologies so as to strengthen their military for instance, South Korea has been investing heavily in military to develop latest ammunitions. The rising tensions in Middle East region especially in between Israel and Hezbollah, between Israel and Hamas are expected to push the demand for artillery ammunitions.

The automation in reconnaissance, surveillance, and target acquisition has developed such systems which have integrated computer systems for technical and tactical fire control. Rockwell Collins has developed the system which is capable of providing digital fire solutions which enable the digital calls to be used for indirect fires on mortar, range systems and artilleries. The systems provide quick reactions, all the resources of fire are synergized and integration with army’s control system and computing. 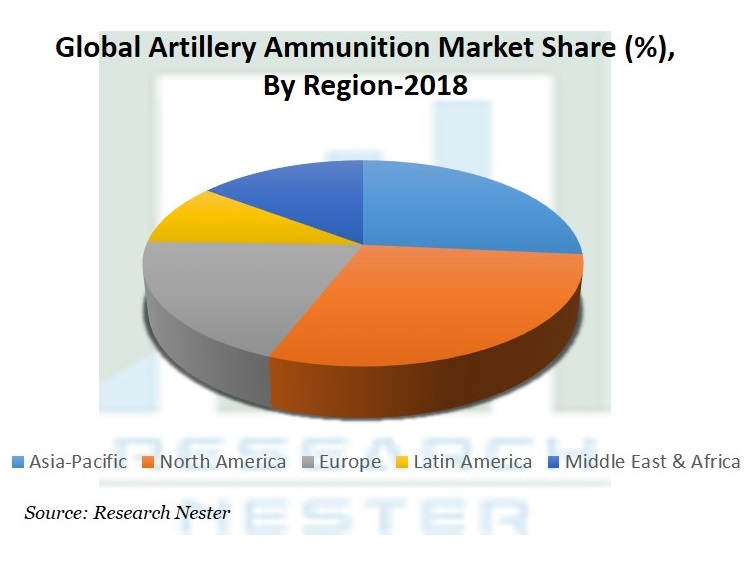 The high cost associated with the ammunitions and the limited budgets are the key restraints due to which these are unaffordable to many low economic countries, thereby projected to limit the product demand during the forecast period.

North America is anticipated to have leading shares during the forecast period on the back of huge government investments in military and defense sector coupled with presence of major key players in the region. Europe is expected to witness significant growth owing to the recent events that has taken place in the continent. The attacks have forced the countries to adopt for better defense strategies to tackle the threats, the increasing requirement to acquire artillery ammunition to safeguard the national interests are expected to drive the market growth. Asia –Pacific is anticipated to witness significant growth on the back of increasing terrorist activities in the region coupled with rising territorial conflicts between the countries. India is expected to contribute most in the market with increasing investments in modernizing the military facilities, the country is anticipated to buy better artillery guns in near future in order to replace the conventional guns coupled with the fact that the sub-continent is having the 2nd largest army in the world providing huge consumer base. The investments made by the countries for instance, China, South Korea and Japan in defense to develop high end military facilities is anticipated to boost the market growth.

The global artillery ammunition market is further classified on the basis of region as follows: