The global session border controller (SBC) market registered a market revenue of USD 616.8 million in the year 2019 and is further projected to cross USD 940 million by the end of 2028 by growing at a CAGR of 4.73% during the forecast period, i.e., 2020-2028. Shifting preferences of enterprises from the public switched telephone network (PSTN) lines to IP telephony or voice over internet protocol (VoIP) based private branch exchange (PBX), coupled with the increasing penetration of 5G telecommunications network globally are some of the significant factors anticipated to create numerous opportunities for market growth during the forecast period. 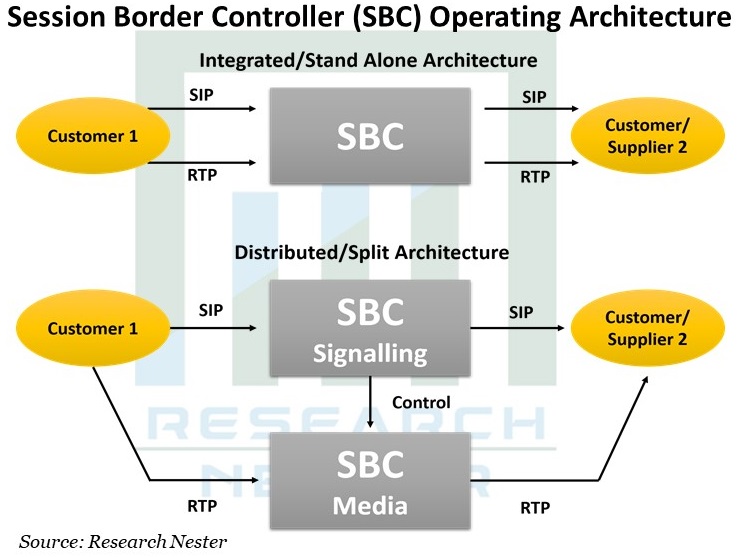 The global session border controller (SBC) market is witnessing rapid growth on account of the increasing application of technology in various industry verticals worldwide, along with the rising number of 5G devices. Additionally, one of the major factors that is anticipated to contribute to the market growth is the increasing number of mobile internet users, which is anticipated to grow at a significant pace worldwide. The market is further projected to cross USD 690 million by the end of 2021.

The global session border controller (SBC) market is segmented on the basis of region into five major regions, including North America, Europe, Asia Pacific, Latin America, and the Middle East & Africa. Among the market in these regions, the market in North America is anticipated to hold the largest market share of 41.79% by the end of 2021 and further grow with a CAGR of 4.04% during the forecast period. Increasing technological advancements amongst enterprises in different industry verticals, along with the growing implementation of advanced technologies, such as artificial intelligence (AI), internet of things (IoT), and others, and the rising demand for session border controllers amongst small, medium, and large enterprises are some of the key factors anticipated to drive the market growth in North America. 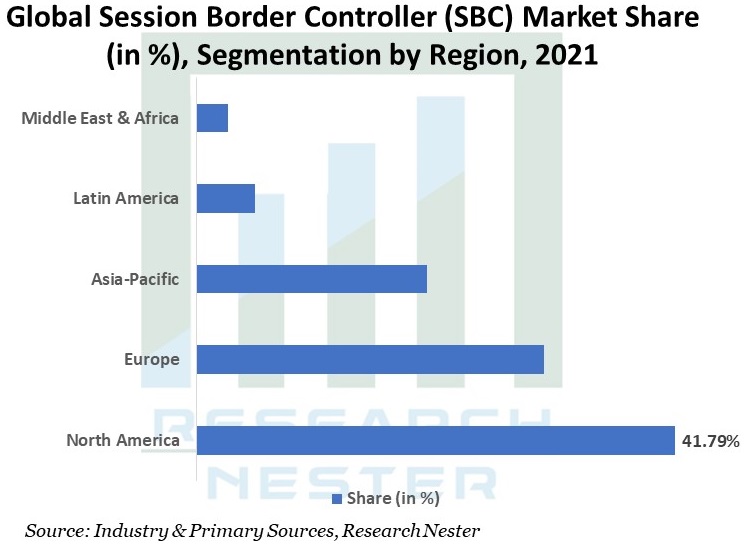 On the other hand, the market in the Asia Pacific is forecasted to grow with the highest CAGR of 6.07% during the forecast period. The presence of numerous manufacturers and component providers of SBCs, along with the increasing adoption of the digital ecosystem amongst commercial users, such as governmental agencies, operators, vendors, and others, and the favorable government initiatives that promote the advancements in digital technology, are some of the factors anticipated to drive the market growth in the region.

The global session border controller (SBC) market is segmented by type into enterprise SBC, service provider SBC and hybrid SBC. Amongst these segments, the enterprise SBC segment is projected to hold the largest market share of 69.27% by the end of 2021. Enterprise session border controllers or (E-SBCs) are installed at the border between trusted and untrusted networks. They operate at the session layer, processing traffic that uses real-time communication protocols, primarily SIPs. Backed by the rising BYOD culture, and increasing adoption of remote working owing to the impact of the coronavirus pandemic, E-SBCs are very essential amongst organizations for secure and constant connectivity. Organizations further utilize E-SBCs to connect and control the traffic flowing through the enterprise’s real-time communications infrastructure to the private IP networks, public internet, and one or more SIP trunk service providers. The enterprise session border controller segment is further sub-divided into small-scale enterprises, medium-scale enterprises, and large-scale enterprises, amongst which, the medium-scale enterprises segment is projected to grow with the highest CAGR of 5.13% during the forecast period. 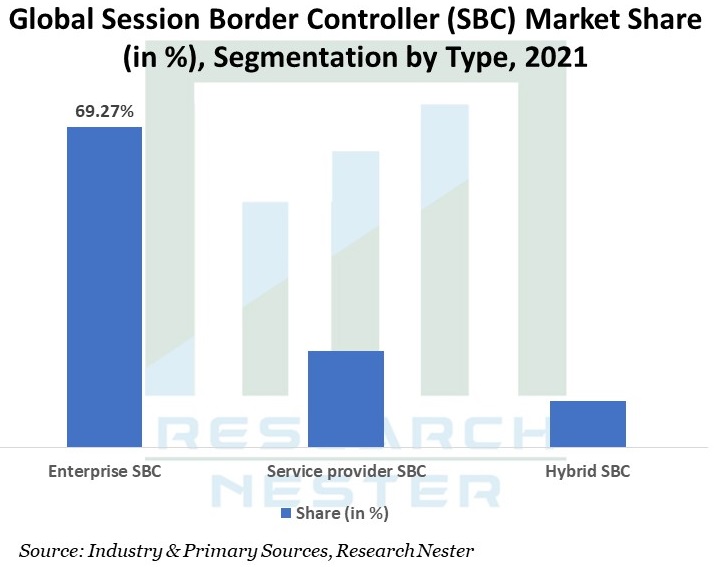 Growing Need amongst Enterprises to Safeguard their Communication Channels

Over the years, VoIP has become an increasingly popular communication channel for various companies owing to its greater flexibility, less complication, and enhanced cost-effectiveness when compared to conventional business communication technologies. With the growing adoption of VoIP, the concern for data theft and network blockages is also growing massively, which is raising the need amongst the enterprises to deploy SBCs. SBCs protect the VoIP networks and enterprises can either choose an on-site hardware-based SBC or a cloud/virtual software-based SBC. The adoption of SBCs is also growing exponentially on account of the increasing preference for IP communication platforms, rising demand for increased security of the communication channels, and the need for exemplary customer experience. Alternatively, the increasing demand for high-speed data network connectivity, along with the need for minimum latency to ensure seamless network connectivity are some of the additional factors anticipated to drive the market growth in the coming years.

The primary role of SBCs is to protect and secure the network from hackers. As IP communication channels are highly susceptible to cyber-security threats, such as distributed denial-of-service (DDoS) attacks, toll frauds, and others, enterprises are increasingly deploying SBCs to gain more control over their VoIP communication channels. SBCs possess numerous benefits, including features such as intelligent session control, and enhanced scalability, which play an important role in the unified communication network. Moreover, with the recent advancements in technology, manufacturers of SBCs are increasingly working on adding new features for a greater consumer experience. SBCs are designed to respond to real-time communication cyberattacks, fraud, and other incidents. This equipment is also known to have an accelerated response to threats, which further reduces the operational cost of the user. Furthermore, the SBCs also ensure that the communication traffic is delivered through the favorable route only, therefore enabling business organizations to ensure that every call is being effectively delivered to its final location. Such factors are anticipated to drive the growth of the session border controller (SBC) market during the forecast period.

While there are various advantages of the session border controller, the technology also comes with its disadvantages. The complex interoperability associated with the product is one of the critical factors limiting its implementation in the industry verticals. The lack of a clear data model for the protocol design, along with the fact that the setup and maintenance of the SBC require high expertise, are some of the major factors anticipated to limit the growth of the market. Additionally, lack of awareness regarding session border controllers (SBCs) amongst business organizations worldwide, along with the complex configuration process and poor implementation practices, and the availability of open-source SBCs, are some of the additional factors projected to lower the market growth in the coming years.

Amid the coronavirus pandemic, several countries globally resorted to lockdowns to flatten the curve of the viral disease. During the period, most of the SBC service providing companies have witnessed significant growth in some industries, backed by the surge in the work from home (WFH) users. However, in some sectors, due to the impact of the temporary shutdown of businesses, the demand for SBCs in several other end-use industries wedged massively.

What are the major factors driving the growth of the session border controller market?

Growing need of organizations to safeguard their communication network, along with the numerous benefits associated with the utilization of SBCs, are some of the major factors driving the market growth.

What would be the CAGR of session border controller market over the forecast period?

Which region will provide more business opportunities for growth of session border controller market in future?

The market in the Asia Pacific is forecasted to grow with the highest CAGR of 6.07% during the forecast period and display significant business opportunities for the growth of the market in the future.

Who are the major players dominating the session border controller market?

What are the segments in the session border controller (SBC) market?

Which segment under type segment is projected to hold the dominating share in the session border controller (SBC) market?

The enterprise session border controller (SBC) segment, which is a sub-segment under the type segment, is projected to hold the largest market share of 69.27% by the end of 2021.

What are the restraining factors impacting the market growth?

Concerns regarding the complexities regarding the interoperability features of the SBCs, is one of the major factors estimated to act as barriers to the growth of the market.