The server microprocessors are equipped with multiple processors which enhances the processing capability of the machine. Additionally, the storage capacity is also enhanced with the insertion of the multiple disks.

The server microprocessor market is anticipated to record a CAGR of 2.5% over the forecast period. It is expected to attain a total value of the USD 17 billion by 2027.The global server microprocessor market is observing vibrant growth on the account of expansion of the technology which includes IoT (Internet of things), big data and artificial intelligence. Additionally, increasing penetration of the internet across the globe leads to the expansion of the data centers. Thus, it is anticipated to boost the growth of the overall market during the forecast period. 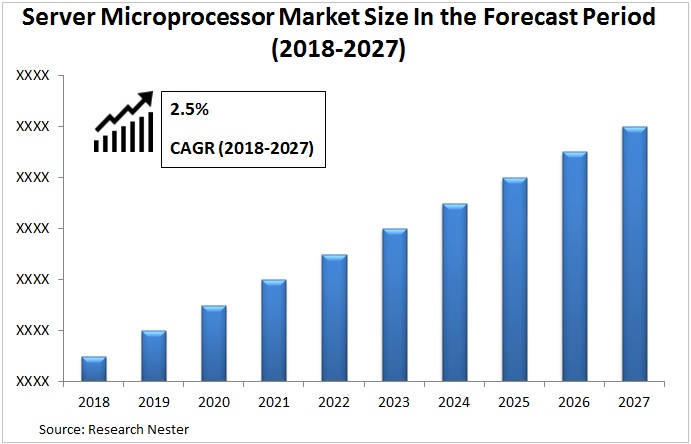 Increasing adoption of the cloud based solution

The increasing adoption of the cloud based services across the various organizations in order to increase the operational efficiency is anticipated to drive the overall server microprocessor market during the forecast period.

Increasing Data Center across the globe

The growing number of the data center across the globe on the account of increasing penetration of internet is anticipated to be the major growth driver for the overall market during the forecast period. Additionally, the increasing penetration of the social networking sites is anticipated to further propel the growth of the data centers. This in turn is expected to boost the growth of the overall server microprocessor market.

The high cost associated with the software is anticipated to restrain the growth of the overall market during the forecast period.

Global server microprocessor market is further classified on the basis of region as follows: