The global rubella treatment market is estimated to garner a sizeable revenue and grow at a robust CAGR over the forecast period, i.e., 2022 – 2030. The growth of the market can be largely attributed to the growing number of cases of rubella that results from high transmission ability of togavirus via air. Along with this, launch of several government initiatives associated with research and development of sophisticated diagnostic techniques, especially in emerging economies such as China and India, is expected to offer abundant opportunities for market growth in the near future. Furthermore, high risk of major complications in rubella infected pregnant women, and escalating government initiatives to include rubella vaccinations in national health programs, targeted mainly towards children and young adults, are also significant factors projected to augment the growth of the market in the upcoming years. According to the World Health Organization, 168 out of 194 countries introduced rubella vaccines in their health programs and the global coverage was about 69 percent as of December 2018. 14,621 cases of the disease were reported in 151 countries that same year. 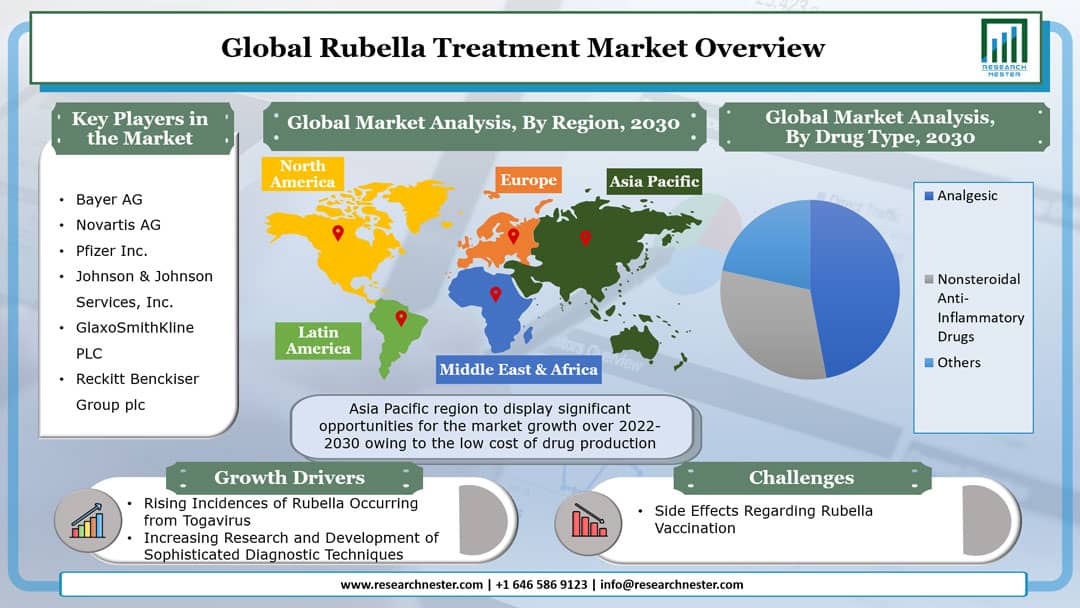 The market is segmented by drug type into analgesic, nonsteroidal anti-inflammatory drugs, and others, out of which, the analgesic segment is anticipated to hold the largest share in the global rubella treatment market. This can be accounted to the high demand for analgesics across the globe owing to their ability to effectively reduce fever and relieve several kinds of mild to moderate pain. Additionally, on the basis of route of administration, the segment for oral route is predicted to grab the most significant share during the forecast period, which can be credited to its advantages, including patient compliance, non-invasiveness, and convenience of drug administration. Apart from these, most of the medicines for managing the symptoms of rubella are administered via oral route, which is also assessed to boost the segment’s growth in the future.

On the basis of geographical analysis, the global rubella treatment market is segmented into five major regions including North America, Europe, Asia Pacific, Latin America and the Middle East & Africa region. The market in North America is estimated to predicted to acquire the largest share over the forecast period on the back of the growing levels of awareness about rubella, high healthcare spending, and rising number of drug manufacturing facilities in the region. The Centers for Medicare and Medicaid Services stated that in 2019, the healthcare expenditure in the United States reached a value of USD 11,582 per person in 2019. It accounted for 17.7 percent of the nation’s GDP that same year.

In addition, Europe is anticipated to be the second largest shareholder in the market during the forecast period owing to stringent regulatory framework and government guidelines regarding the health of mother and child. Moreover, the market in Asia Pacific is expected to witness noteworthy growth by the end of 2030, which can be credited to the increasing government initiatives to develop novel vaccines and therapies, and relatively low cost of drug production in the region. 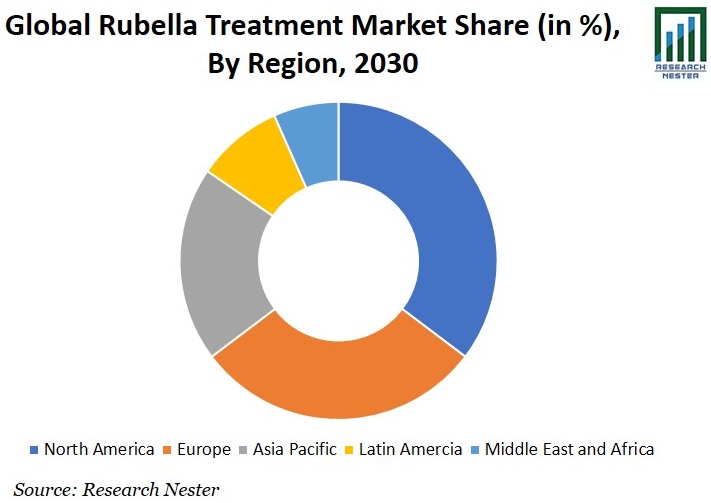 The global rubella treatment market is further classified on the basis of region as follows:

Our in-depth analysis of the global rubella treatment market includes the following segments:

1) What are the major factors driving the growth of the rubella treatment market?

2) What would be the CAGR of rubella treatment market over the forecast period?

3) What are the challenges affecting the rubella treatment market growth?

Ans: Side effects associated with rubella vaccination are estimated to hamper the market growth.

4) Which region will provide more business opportunities for growth of rubella treatment market in future?

Ans: Asia Pacific will provide more business opportunities for market growth owing to the high levels of awareness about rubella, and rising number of drug manufacturing facilities in the region.

5) Who are the major players dominating the rubella treatment market?

Ans: The major players in the market are Novartis AG, Pfizer Inc., Johnson & Johnson Services, Inc., GlaxoSmithKline PLC, and others.

7) What are the segments in the rubella treatment market?

Ans: The market is segmented by drug type, route of administration, end user, and by region.

8) Which segment captures the largest market size in the route of administration segment in the rubella treatment market?

Ans: The oral segment is anticipated to hold largest market size and is estimated to grow at a notable CAGR over the forecast period and display significant growth opportunities.