Renal diseases are disorders of the kidney which affect the process of filtration of the blood, thereby requiring external aid such as dialysis in order to perform its function. The main kidney disorders include chronic kidney disease, acute kidney failure, kidney stones, glomerulonephritis and end-stage renal disease. Effective and improved treatment methods are required so as to reduce the effects of the disease on the body and recover the damage done to the kidneys. This is leading to a high demand for such therapies and treatment methods, thereby resulting in a high potential for the market growth.

The renal disease treatment market is anticipated to record a CAGR of around 6.5% over the forecast period, i.e., 2019-2027. The market is segmented by disease, by treatment, by end user and by region, out of which, the disease segment is further segmented into acute kidney failure, chronic kidney disease [CKD], end-stage renal disease [ESRD] and others. Based on disease, the chronic kidney disease (CKD) segment is anticipated to hold the largest share in the renal disease treatment market. As per a 2019 report published by the Centers for Disease Control and Prevention, around 15% of adults living in the United States, which means about 37 million people, are estimated to have chronic kidney disease (CKD). Out of these, the current estimates suggest that the disease is not diagnosed in 9 in every 10 people living with CKD. Moreover, according to the current estimates, the prevalence of CKD is higher among the older population, i.e., people who are aged 65 years or more with 38% prevalence. For adults aged between 45 to 64 years, the incidence of this disorder is anticipated to be 13% while for adults aged between 18 and 44 years, it is 7%. Furthermore, the report states that chronic kidney disease is more common in women than men with 15% and 12% prevalence respectively. The higher cases of chronic kidney disease among the population is estimated to result in the growth of this segment over the forecast period. CLICK TO DOWNLOAD SAMPLE REPORT 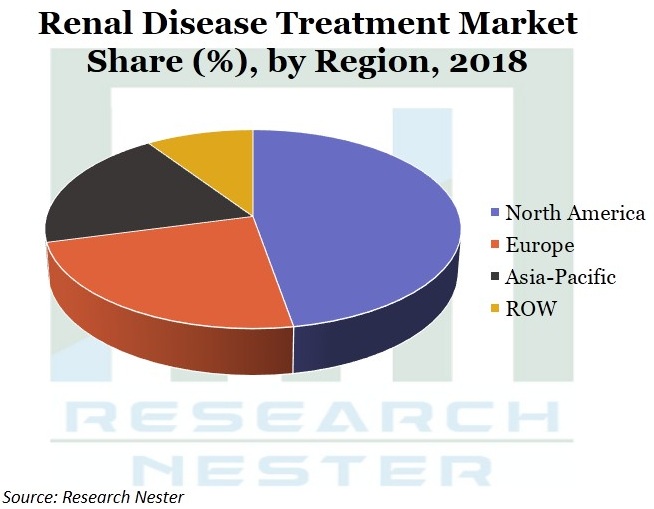 Rising Expenditure on Medical Treatments to Boost the Growth of Industry

The changing lifestyles of people leading to unhealthy food habits and poor health results in development of various disorders. The increasing prevalence of health disorders that have a direct impact on the kidney, such as diabetes, hypertension and obesity are estimated to result in the growth of renal disease treatment market.

The various medical devices and equipment developed for the treatment of renal disorders have to go through strict approval procedures which might be a lengthy and time-consuming process. Similarly, the drugs are required to go through various clinical trials before being approved for the market. The stringent government policies for the approval of treatment methods for renal disorders is estimated to become a limiting factor for the market growth.

Our in-depth analysis of the renal disease treatment market includes the following segments:

On the basis of geography, the largest share in the renal disease treatment market is anticipated to be held by the market in North America. This can be attributed to the large patient population on account of rising adoption of unhealthy lifestyles in the region which affect the kidney and result in kidney disorders among them. Moreover, the growing expenditure on healthcare by people in North America region along with the rising demand for improved healthcare services and advanced treatments are additional factors anticipated to contribute towards the market growth. Further, the market in Europe is estimated to witness considerable growth in the upcoming years as well. The growing healthcare infrastructure in the region along with rising research and development activities in the medical industry in this region are the factors anticipated to result in the market growth. However, the highest growth rate during the forecast period is estimated to be observed by the market in Asia-Pacific. Rising awareness about renal diseases and related disorders in the region, mainly in countries such as China, Japan and India, is the foremost growth driving factor. Other factors supporting the market growth include growing healthcare expenditure, expanding healthcare infrastructure and escalating population with health disorders in the region.

The renal disease treatment market is further classified on the basis of region as follows: