Radar detector is referred to a device which is used for detection of signals. Radar detector helps the cops detect signals at a greater range than the radar unit itself. It aids in detecting the speeding of the car. Radar detectors are easy to operate and low manning is required. 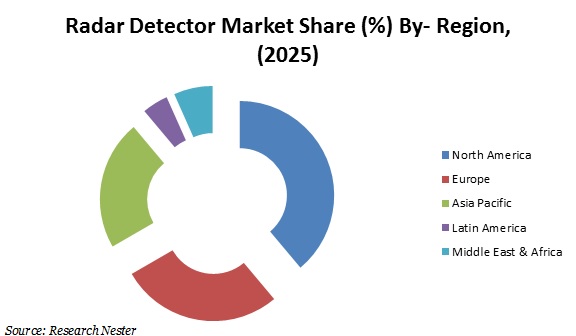 Asia-Pacific region is the fastest growing market of radar detector in 2017 due to rising awareness regarding radar detector utilization in various industrial activities. Moreover, Asia-Pacific region is the most lucrative market due to emerging economies such as China, Japan and India. In addition to this, China and India are the major countries augmenting the demand for radar detector due to favorable government initiatives. Likely, positive GDP figures coupled with government initiatives to improve vehicle safety & security is envisioned to propel the growth of radar detector market.

Middle East and Africa is poised to showcase outstanding growth during the forecast period due to rapid urbanization couple with government initiatives.

Our in-depth analysis segmented the global radar detector market in the following segments:

Global radar detector market is further classified on the basis of region as follows:

Furthermore, rising demand to limit the accidents along with ease for vehicle owners, not to cross the limit of their vehicles are believed to spur the growth of radar detectors market over the forecast period. Additionally, growing research and development activities by major key players to provide effective product and modernization of existing radar detector are garnering the growth of radar detector market. Further, radar detectors are legal in non-commercial vehicles in 49 states in the United States (all except Washington D.C. and Virginia). This factor is also helping the market to grow and achieve phenomenal market size.

The major key players for radar detector market are as follows

The global radar detector market is segmented as follows: