Pulmonary fibrosis is a lung disorder characterized by damage or scarring of the lung tissue. Once the tissue is damaged, it obstructs the passageway for air and thus hinders the normal functioning of the lungs. It is usually caused as a result of certain medical conditions, exposure to toxins, pollutants or radiation or by certain medications.

When the cause of this condition is not known, it is termed as idiopathic pulmonary fibrosis. The common symptoms of this disease include shortness of breath or dyspnea, fatigue, dry cough, weight loss and pain in muscles and joints. Eventually, it may lead to respiratory failure or pulmonary hypertension.

As per the Pulmonary Fibrosis Foundation, the disease affects about 1 out of 200 adults above the age of 70 years in the United States. Moreover, around 50,000 new cases of pulmonary fibrosis are diagnosed in the country every year.

The pulmonary fibrosis drugs market is anticipated to record a significantly high CAGR over the forecast period, i.e., 2020-2028. The market is segmented by drug and by region, out of which, the drug segment is further bifurcated into pirfenidone and nintedanib. The segment for pirfenidone is anticipated to hold the largest share in the pulmonary fibrosis drugs market on account of increased usage of the drug ever since it received approval by the Food and Drug Administration (FDA). Esbriet is a pirfenidone drug manufactured by Genentech, Inc. and approved by the U.S. FDA in 2014 in the United States. The drug is available as oral dosage in the form of either capsules or tablets. The most common adverse reactions consist of rash, nausea, headache, fatigue, dizziness, insomnia and upper respiratory tract infections. The segment for nintedanib is predicted to grow at a substantial rate as well, owing to the high demand for the drug. Ofev is a nintedanib drug which received FDA approval in 2014 in the United States. This drug, developed by Boehringer Ingelheim International GmbH, is in the form of capsules for oral use. Ofev is a kinase inhibitor indicated for the treatment of idiopathic pulmonary fibrosis (IPF).

There are certain risk factors which lead to the occurrence of pulmonary fibrosis. These include geriatric population, smoking, exposure to toxins, cancer treatments along with some genetic factors. According to the National Health Service (NHS) in UK, idiopathic pulmonary fibrosis (IPF) commonly affects people between the ages of 70 and 75 years, and it rarely occurs among people under the age of 50 years. Moreover, it states that about 1 in 20 people with IPF have a family history of the disease. These risk factors are estimated to drive the market growth in coming years. CLICK TO DOWNLOAD SAMPLE REPORT

Increase in Cigarette Smoking Population to Drive the Market Growth

The increasing number of people who smoke is a major concern which results in several diseases of the lungs, including pulmonary fibrosis. According to Centers for Disease Prevention and Control, around 13.7% of all adults, i.e., 34.2 million people were reported to smoke cigarettes in the United States in 2018, out of which, 15.6% were men and 12.0% were women. This is predicted to raise the demand for drugs for pulmonary fibrosis and thereby boost the growth of the market during the forecast period.

Limited Availability of Approved Drugs to Restrict the Market Growth

Presently, only a few drugs have been received approval by the FDA and other regulatory bodies for the treatment of pulmonary fibrosis. There are only two approved drugs as of now, pirfenidone and nintedanib. This is estimated to limit the market growth. More research and development in the field is required in order to expand the market size.

Our in-depth analysis of the pulmonary fibrosis drugs market includes the following segments:

Pulmonary fibrosis drugs market is predicted to grow at the highest rate in the Asia Pacific region on account of growing presence of leading companies involved in research and development activities for the manufacturing of effective drugs. Moreover, the increasing number of patients with pulmonary fibrosis in the region is a major factor estimated to resulting in the market growth over the forecast period. The Lung Foundation of Australia estimates that around 1,250 people in Australia are diagnosed with idiopathic pulmonary fibrosis every year. The market in North America is estimated to hold the leading share in the market as a result of growing research and developments in the area as well as presence of key players in the market in this region. 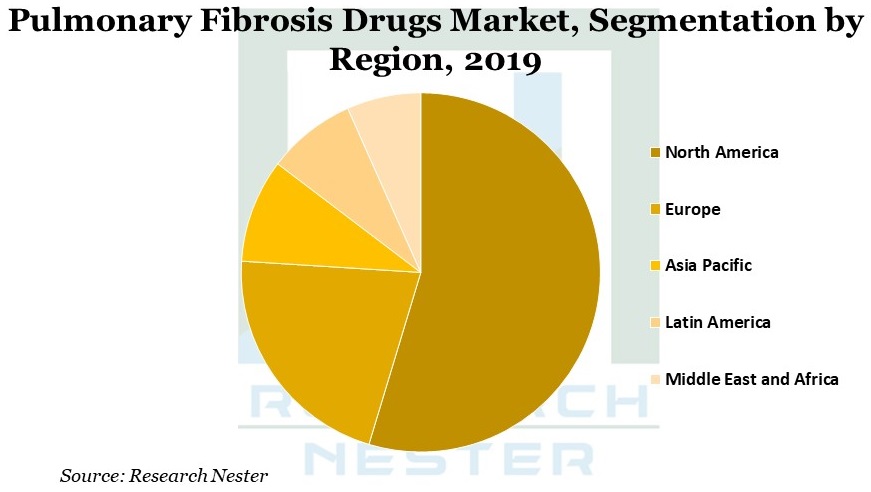 The pulmonary fibrosis drugs market is further classified on the basis of region as follows:

What are the major factors driving the growth of the Pulmonary Fibrosis Drugs market?

The risk factors associated with pulmonary fibrosis such as geriatric population, smoking, exposure to toxins, cancer treatments along with some genetic factors are estimated to drive the growth of the market.

What would be the CAGR of Pulmonary Fibrosis Drugs market over the forecast period?

The market is anticipated to attain a significantly high CAGR over the forecast period, i.e. 2020-2028.

Which region will provide more business opportunities for growth of Pulmonary Fibrosis Drugs market in future?

Growing presence of leading drug manufacturers in Asia Pacific is anticipated to provide more business opportunities in the region for the market growth.

Who are the major players dominating the Pulmonary Fibrosis Drugs market?