· On April 2, 2019, Novartis, a leading pharmaceutical company focused on immuno-dermatology and rheumatology, announced the approval of Cosentyx (secukinumab) by the China Health Authority NMPA. Cosentyx is an interleukin-17A (IL-17A) inhibitor used for the treatment of moderate to severe cases of plaque psoriasis in adults. It is the first and only fully-human psoriasis treatment that is specific to IL-17A.

· On February 27, 2019, Johnson & Johnson’s Jansenn Pharmaceutical Companies division announced that it received the FDA approval for TREMFYA (guselkumab) One-Press, a single-dose and patient-controlled injector for moderate to severe plaque psoriasis in adults.

Psoriasis is a chronic health disorder which affects the skin and causes scaly and patchy red skin. In this, the cell division takes place rapidly which results in the formation of skin cells on the surface which might be itchy and painful. The symptoms of psoriasis can be managed with the help of proper medication, therapy and positive environmental changes. However, as it is a chronic condition, it cannot be treated completely. The exact cause of the condition isn’t known yet, though it is considered to be an autoimmune disorder.

According to the International Federation of Psoriasis Associations, around 3% of the world’s total population has psoriasis. The disease affects more than 125 million people from all over the world. 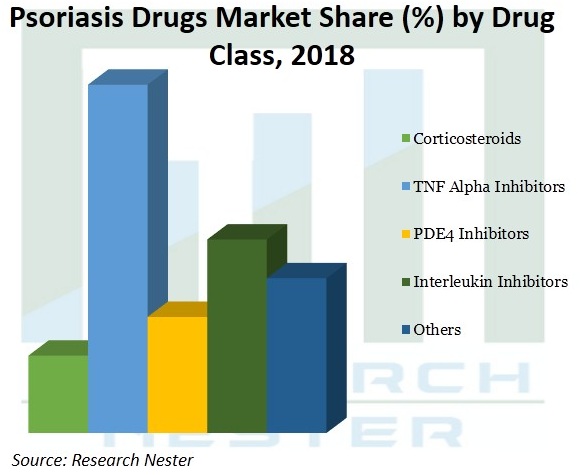 The rising awareness among people about psoriasis and the available treatments for it resulting in a higher demand for effective drugs for psoriasis. The World Health Organization reported in 2016 that psoriasis can occur at any age, however, according to some studies, psoriasis begins to form at the age of 33 years. Other studies indicate that the disease occurs before the age of 46 years. Furthermore, the report indicated that the prevalence of psoriasis in various countries varies between 0.09% and 11.4%, while the prevalence in developed countries varies between 1.5% and 5%. This is anticipated to propel the market growth in the upcoming years.

Combination therapy is the administration of two or more drugs as a single dose so as to obtain highly improved results. Combination therapy for psoriasis provides faster results with much lower side-effects of the drugs. This is estimated to drive the growth of psoriasis drugs market. Further, the growing investments in research and development activities in developed and developing countries is predicted to further raise the market growth.

Ill-Effects of the Medication to Impede the Market Growth

Despite the growing developments in the market for psoriasis drugs, the high cost of these drugs is estimated to become a restraining factor for the market growth. Additionally, psoriasis drugs might cause side-effects such as high blood pressure, liver damage and kidney damage, which are predicted to limit the growth of psoriasis drugs market during the forecast period as well.

Our in-depth analysis of the psoriasis drugs market includes the following segments:

On the basis of regional analysis, the psoriasis drugs market is segmented into five major regions including North America, Europe, Asia Pacific, Latin America and Middle East & Africa region. Geographically, the psoriasis drugs market is anticipated to hold the largest share in the North America region. The rising prevalence of psoriasis is a major factor contributing towards the market growth in this region. Moreover, the various government initiatives supporting the psoriasis drugs along with the presence of developed healthcare infrastructure are some other factors predicted to result in growth of the market over the forecast period. The market in Asia Pacific region is predicted to grow at a steady rate on account of growing awareness about the condition and developing healthcare infrastructure in the region. 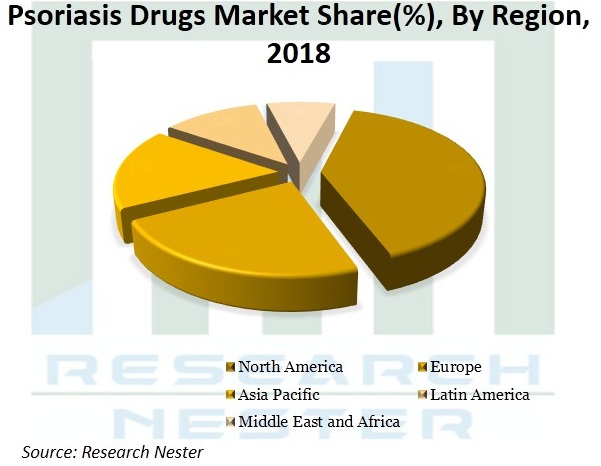 The psoriasis drugs market is further classified on the basis of region as follows: