Extensive insights into the Growth of Prostaglandin Market amidst COVID-19

The global prostaglandin market is anticipated to record a moderate CAGR over the forecast period, i.e., 2021-2029. The market is primarily driven by the increasing complications observed among women during labor in the process of childbirth, along with the increasing use of prostaglandins in obstetric practices. 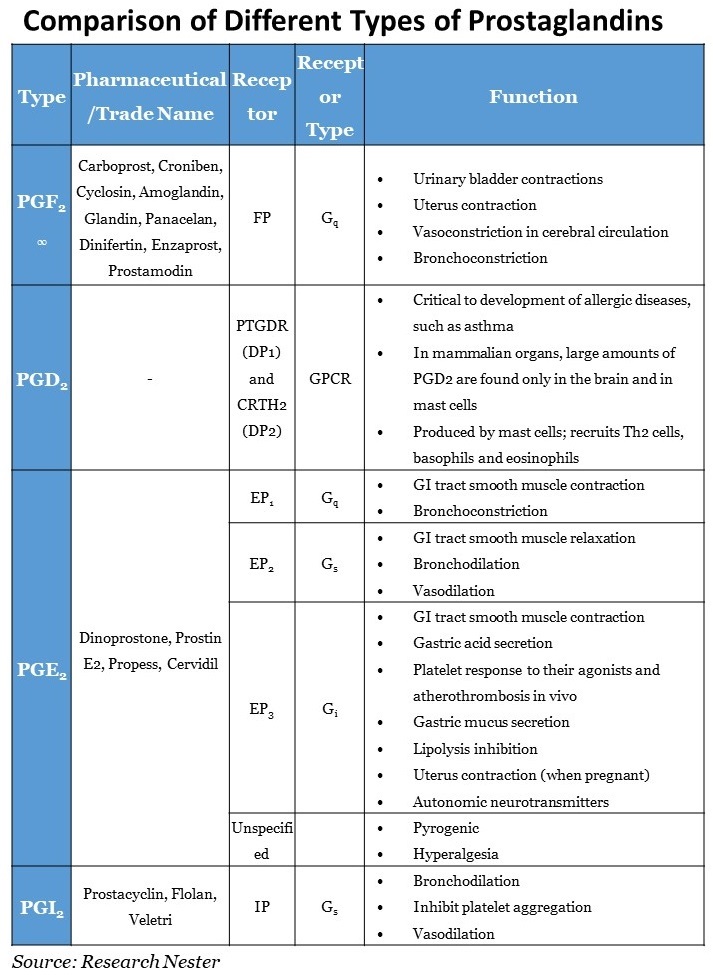 The global prostaglandin market is further thriving on account of the numerous properties associated with the compound, which makes it widely accepted in different health applications, including cardiology, gastroenterology, ophthalmology, gynecology & obstetrics, and others. Also, the role of prostaglandins in the pathophysiology and treatment of various vascular disorders by the utilization of the compound is further expected to boost the market growth in the near future. The market is segmented on the basis of application into cardiology, gastroenterology, ophthalmology, gynecology & obstetrics, and others, out of which, the cardiology segment is projected to account for the leading market share in the year 2021 on the back of an increasing number of geriatric populations across the globe and the growing incidences of cardiovascular diseases worldwide. According to the statistics by the World Health Organization (WHO), the proportion of the global population aged 60 years and above is projected to double from 12% to 22% between 2015 and 2050. Alternatively, the gynecology & obstetrics segment is projected to grow with the highest CAGR during the forecast period on account of the increasing applications of human prostaglandin medications in women during pregnancy. Further, the growing utilization of prostaglandin synthetase inhibitors, such as ibuprofen, indomethacin, ibuprofen and mefenamic acid for the treatment of primary dysmenorrhea, is also anticipated to help drive the growth of the segment during the forecast period. CLICK TO DOWNLOAD SAMPLE REPORT 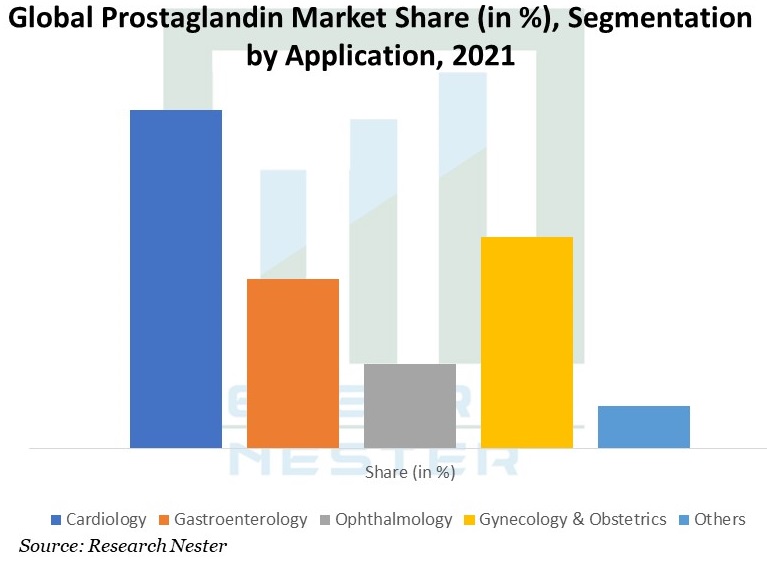 Migraine is a neurological condition that is frequently characterized by debilitating and intense headaches. Some of the major symptoms caused by migraines include vomiting, sensitivity to light & sound, nausea, and others. One of the major reasons for implicating prostaglandins in pathogenesis is for the cause of migraine headaches. These compounds are able to constrict or relax the cerebral blood vessels, which helps in reducing migraine headaches. Moreover, these compounds have reportedly known to potentiate the effects of bradykinin and other forms of chemically induced pain by sensitizing the peripheral pain receptors. Additionally, prostaglandin also helps in the diagnosis of inflammatory diseases, such as edema, erythema, and tissue damage, and is capable of modulating the release of neurotransmitters from nerve terminals. Prostaglandin inhibitors are also effectively used for shortening the duration of migraine attacks and reduce the side effects such as nausea, vomiting, and abdominal pain.

Increase in the Number of Cardiovascular Patients

In other statistics by the WHO, every year 17.9 million people die due to cardiovascular diseases.

Development in the area of neonatal cardiac surgery has increased the importance of rapid diagnosis and stabilization of infants with congenital heart disease. With the increasing applications of prostaglandin in the early stages of detection of cardiovascular diseases, the compound helps the patients to be more clinically stable for surgery. Therapy with prostaglandin can effectively maintain an infant's cardiovascular function until a palliative or corrective procedure can be performed. Additionally, the growing geriatric population with major congenital heart disease is further projected to enhance the market growth over the forecast period.

Health Concerns Associated with the Uneven Production of Prostaglandins

The primary issues with uneven prostaglandins are the unwanted inflammation in the body. Excessive production of prostaglandin can cause chronic diseases with significant pain. Moreover, menstruation bleeding, arthritis, and some types of cancer, among others are connected to the high amount of prostaglandin formation. Sometimes, the formation of prostaglandin is not enough to heal the injury, which in turn is also anticipated to hamper the market growth over the forecast period.

Our in-depth analysis of the global prostaglandin market includes the following segments:

On the basis of regional analysis, the global prostaglandin market is segmented into five major regions including North America, Europe, Asia Pacific and the Middle East & Africa region. Among these regions, the market in North America is expected to display significant growth owing to the increasing number of patients having congenital heart diseases. According to the statistics by the Centers for Disease Control and Prevention (CDC), about 655,000 Americans die from heart disease each year. Moreover, the presence of a strong healthcare network in the region, along with increasing investments by the pharmaceutical companies for the research and development of advanced hormone-like compounds are some of the additional factors anticipated to drive the market growth in North America.

The global prostaglandin market is further classified on the basis of region as follows:

What are the major factors driving the growth of the prostaglandin market?

Increasing use of prostaglandins in obstetric practices, along with growing application of prostaglandin in treating different health disorders, are some of the major factors driving the market growth.

What would be the CAGR of prostaglandin market over the forecast period?

Who are the major players dominating the prostaglandin market?

What are the segments in the prostaglandin market?

The prostaglandin market is segmented by type, application, and by region.

Which segment under application segment is projected to hold the dominating share in the prostaglandin market?

The cardiology segment, which is a sub-segment of the application segment, is anticipated to hold the dominating share owing to the increasing incidences of cardiovascular diseases around the globe.

Growing concerns for the health issues, such as excessive menstruation bleeding, cancer diseases and other chronic diseases among others are some of the major factors estimated to act as barriers to the growth of the market.