A power plant boiler is a closed vessel that generates steam by applying heat to water. A boiler is used in industries that require steam for various operations. The form and size of these boilers to be installed depends on their application. Boilers for use in industrial installation and power stations are usually larger and are connected to point-of-use piping.

The rapid urbanization and industrialization in emerging nations has increased the demand for power considerably. To cater to this increasing demand, government institutions are investing heavily in new power plants and revamping existing ones. In developed countries such as the U.S., the Netherlands, and the U.K., authorities have been focusing on alternate and cleaner fuel sources such as biogas, biomass, and natural gas, thus boosting the expansion of the power plant boilers market.

Developing steam conditions has provided the opportunity to use supercritical technology. The transmission/distribution infrastructure & power industry is anticipated to have the largest investments projects in the industrial world which provides ample opportunity for market growth. Growing energy demand along with pervasive investment across the industrial sector is driving the global boiler market. Emerging economies across Africa and Asia-Pacific have introduced several progressive programs toward the installation and upgradation of the existing boilers which is having a positive impact on the industry growth. For instance, PT United, Kansai Electric Power and Sumitomo Corporation announced a collaborated investment of over USD 4.4 billion for the upgradation of Tanjung Jati thermal power plant in Indonesia during the year 2017.

The factors that drive the power plant boiler market includes technological advancement towards development of more efficient boilers and rapid growth of industrialization using renewable source of energy to meet the growing demand. Power generation energy mix in most of the countries is led by coal. The capital requirement for setting up a coal-based power plant is comparatively less in comparison to other fuel-based power plants. Additionally, coal is easily available in most of the countries, and can also be easily transported from one place to other. 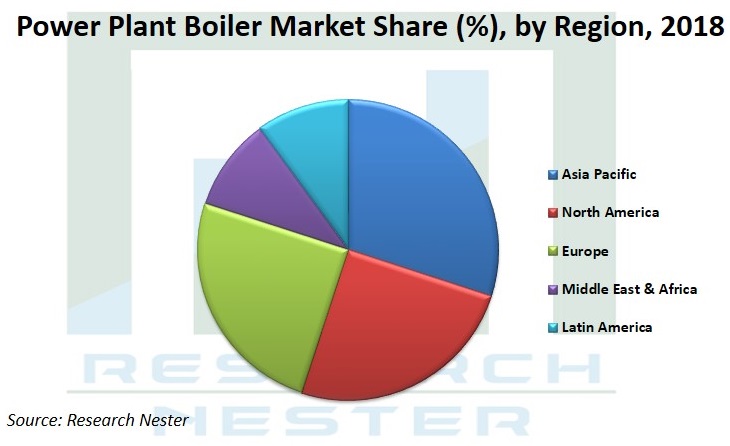 Asia-Pacific region is the major revenue contributor in the market owing to rapid industrialization in countries such as China and India which increases the demand for power boiler. China was identified as the leading country for power boilers market in terms of both shipment capacity and market value in the region, followed by India, Vietnam, Korea, and Indonesia. However, China is now starting to reduce its dependence on thermal power plants and is investing more in alternative sources of energy.

North America & Europe market is expected to grow at a significant rate because government has been focusing on alternate and cleaner fuel sources for power plant boilers. Countries such as Poland and Turkey plan to add new coal-based capacity as a part of their national power development plans.

Power plant boiler market is further classified on the basis of region as follows:

Factors such as growing urbanization, rising power demand, demand for coal fuel-based boilers, number of power capacity expansion projects are boosting the market growth. Furthermore, technological advancements and advancements in the process to increase efficiency and reduce carbon emissions are likely to drive the market towards innovation. The use of coal is likely to increase in the coming years despite concerns over high carbon emissions. The governments across the world are looking for various alternatives to limit pollution caused due to coal by adopting efficient technologies.

Despite drivers for instance governments’ mandated use of clean coal technologies (CCT) for new coal-fired power plants, cheap coal prices, and supportive policies in a few countries for coal-fired power plants, challenges owing to increased focus on renewable energy sources and natural gas to move away from coal for cleaner energy, fluctuating raw material prices, environmental regulations, land acquisition problems, non-availability of domestic coal in some countries, and energy supply security issues are expected to hinder the growth potential of power boilers in the global market.