Power Distribution Unit (PDU) Market Segmentation By Type (Basic and Intelligent PDU); By Power Phase (Single and Three Phase); By Power Rating (Up to 120V, 120–240V, 240–400V, Above 400V); By Distribution Channel (Online and Offline); By Application (Commercial Buildings, Laboratories and Others) and By End User {Telecommunication & IT, BFSI (Banking and Insurance), Transportation, Healthcare, Defense and Others} – Global Demand Analysis and Opportunity Outlook 2028

A power distribution unit is a device which is fitted with multiple outputs, specifically designed to distribute electric power into the networking equipment. It is categorized into basic and intelligent PDU. Intelligent PDU is further divided into metered, monitored, switched, and automatic transfer switch PDU, among others. Power distribution units range from simple rack-mounted power strips to larger floor-mounted PDUs incorporated with multiple functions such as power filtering to improve the quality of power, intelligent load balancing, and remote monitoring.

The power distribution unit market is anticipated to record a notable CAGR over the forecast period, i.e., 2021-2028. The growth of the market can be attributed to the extensive power monitoring and management properties of PDUs which makes it efficient and reliable for critical power load. The power distribution unit market is segmented by end user into telecommunication & IT, BFSI, transportation, healthcare, defense and others. Among these segments, the telecommunication & IT segment is anticipated to hold the largest market share over the forecast period on the back of ongoing developments including cloud computing, internet of things (IoT), and others in digital and communication technologies and increasing number of data centers worldwide. According to the statistics by the International Energy Agency (IEA), data centers account for about 1% of global electricity demand. Moreover, rising concerns regarding power stability to achieve uninterrupted business operations are anticipated to drive the growth of power distribution unit market over the coming years. 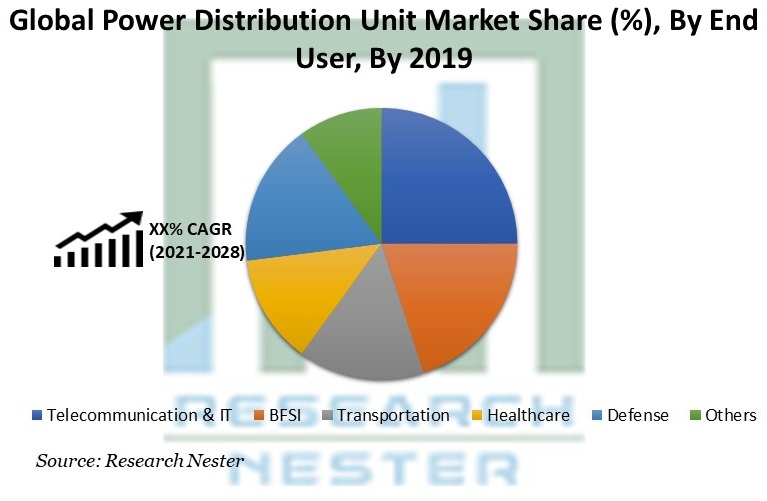 The components of a data center require an infrastructure which can support the center's hardware and software including power distribution units, uninterruptible power supplies (UPS), ventilation, cooling systems, backup generators, and others. A power distribution unit provides steady and uninterrupted power to multiple servers in a data center. Moreover, with the increasing number of internet users worldwide, the demand for data centers is estimated to increase remarkably, thereby, creating growth opportunities for power distribution unit market over the coming years. In other statistics by the IEA, the global internet traffic is expected to grow two-fold to reach around 4 zettabytes per year by 2022. CLICK TO DOWNLOAD SAMPLE REPORT

The power distribution units are designed to be space-saving. The manufacturers of PDUs are increasingly focusing on manufacturing complex PDUs which can be deployed in a less space in a rack. Moreover, the complex design provides more space for the deployment of other network applications, which further aids in simplifying the complexities of cable management. On the other hand, the PDUs provide a central unit to control and distribute electricity, and also includes properties which increases the system accessibility and results in reduced installation time. Such factors are anticipated to increase the demand for power distribution units over the forecast period.

The installation of power distribution units creates an environment which is not readily changeable. Tracing and removing cables can be a difficult and time-consuming process since the placement of the power cables is generally under the floor or in trays. As a result, the complexity of servers in data centers increases. This factor is anticipated to hamper the marker growth of power distribution units over the coming years.

The COVID-19 pandemic has contributed significantly towards the rising demand for power distribution units. Backed by the stringent government norms across countries worldwide to curb the spread of the disease, the use of internet technologies by individuals had observed a sudden boom, and thereafter the increase in the load of data centers. As a result, a significant demand for PDUs had been observed from the end users. On the other hand, the manufacturers of PDU observed numerous challenges as they could not supply the requirements of its end users, primarily due to the restrictions laid down by the authorities for the operations of the factories. However, over the time, with ease in the restrictions, it is anticipated that the market for power distribution units would grow at a significant pace so as to meet the requirements of the end users.

The global power distribution unit market is further classified on the basis of regions as follows: