The global plasma sterilizers market is estimated to garner a revenue of USD 900 Million by the end of 2033 by growing at a CAGR of ~5% over the forecast period, i.e., 2023 – 2033. Further, the market generated revenue of USD 580 Million in the year 2023. The growth of the market can be primarily attributed to the rise in number of hospitals worldwide. A study found that there were more than 8,000 hospitals in Japan in 2020 and nearly 6000 hospitals in the United States. 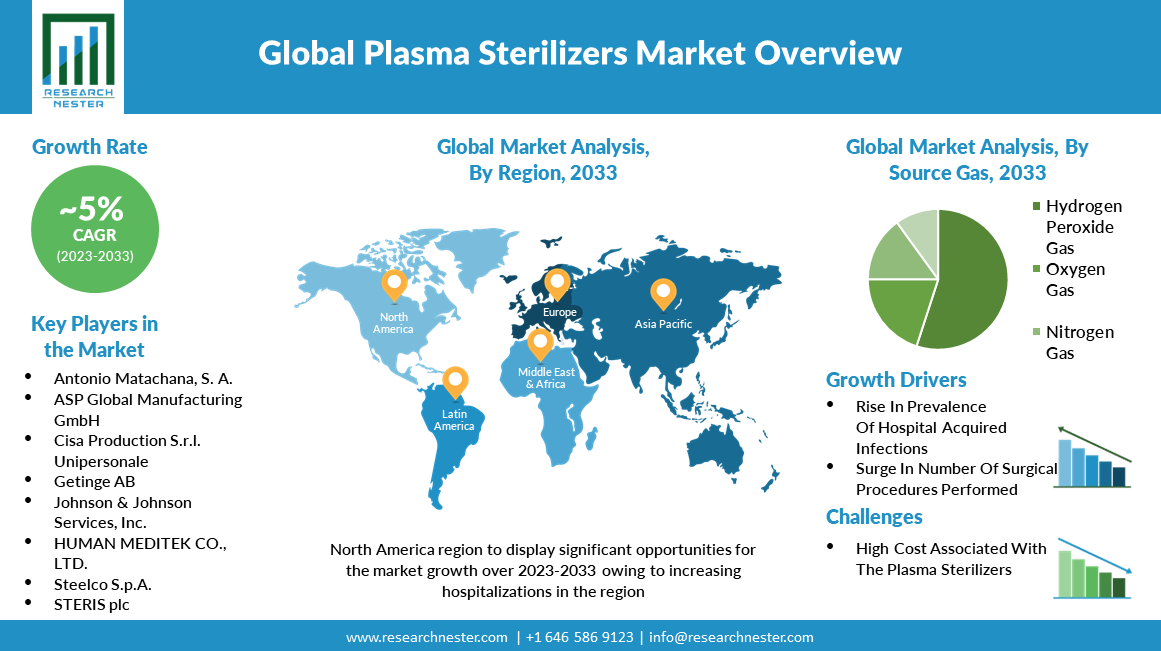 Using hydrogen peroxide gas plasma technology, plasma sterilizers can be used to sterilize a variety of medical equipment safely and effectively. Plasma sterilization is an oxidation process. The plasma initiates a chemical process that deactivates all microorganisms. In high temperatures, hydrogen peroxide molecules turn into free radicals, which are extremely unstable. In order to prevent infection, plasma sterilization was introduced to ensure that medical instruments are properly cleaned. Furthermore, the rising awareness of benefits associated with plasma sterilizers, the growth of hospital beds and intensive care units, the expansion of isolation facilities, and increasing exports of medical instruments are expected to enlarge the global plasma sterilizers market size during the forecast period. In accordance with statistics from the International Trade Center, medical equipment exports were valued at USD 153,157,380 thousands in 2021, an increase from USD 133,713,931 thousands the previous year.

Increasing cases of HAIs in hospitals and other healthcare settings have contributed to a surge in the demand for sterilization equipment as a result of COVID-19 spreading. Additionally, the increasing number of long-term hospitalizations in developing countries results in the emergence of various HAIs among patients, including infections of the bloodstream, urinary tract infections (UTIs), and ventilator-associated pneumonia. Therefore, to control the spread of infections in hospitals, the demand for plasma sterilizers is expected to increase over the forecast period.

Regionally, the global plasma sterilizers market is studied into five major regions including North America, Europe, Asia Pacific, Latin America and Middle East & Africa region. Amongst these markets, the market in North America is projected to hold the largest market share by the end of 2033 backed by the increasing hospitalizations in the region. For instance, approximately 6% of U.S. citizens were hospitalized at least once in 2018. Additionally, technological advancements, the presence of major players, the demand for sterilization technologies, the increasing geriatric population, the rising incidence of different diseases, along with the increased spending on healthcare in the region are expected to drive the plasma sterilizers market in North America during the forecast period. Based on a report released by the Centers for Medicare and Medicaid Services, the U.S. will spend USD 4.1 trillion on healthcare services in 2020, which accounted for 19.7% of country's GDP. 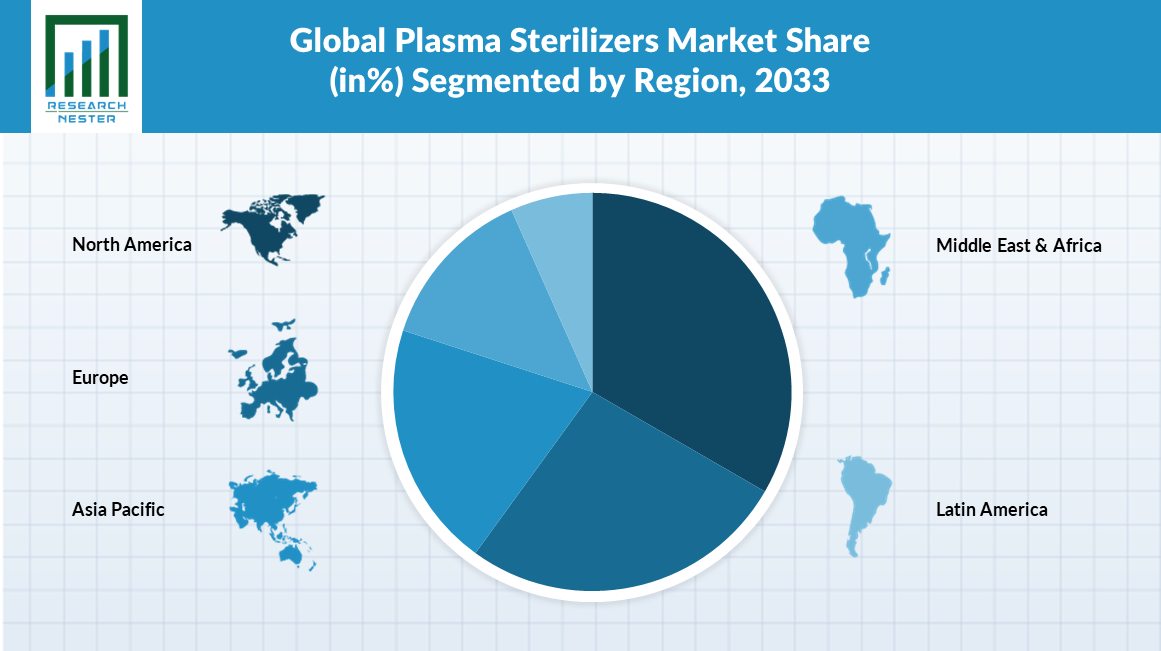 The global plasma sterilizers market is further classified on the basis of region as follows:

Our in-depth analysis of the global plasma sterilizers market includes the following segments:

What are the major factors driving the growth of the plasma sterilizers market?

Rise in incidence of hospitals acquired infections along with increase in hospitalizations are the major factors driving the growth of the plasma sterilizers market.

What would be the CAGR of plasma sterilizers market over the forecast period?

What are the challenges affecting the plasma sterilizers market growth?

High cost associated with the plasma sterilizers are the challenges affecting the market growth.

Which region will provide more business opportunities for growth of plasma sterilizers market in future?

Who are the major players dominating the plasma sterilizers market?

What are the segments in the plasma sterilizers market?

The market is segmented by temperature, chamber capacity, application , source gas, end user and by region.

Which segment captures the largest market size in source gas in the plasma sterilizers market?

The hydrogen peroxide gas is anticipated to garner the largest market size by the end of 2033 and display significant growth opportunities.