Phycocyanin is a water-soluble, non-toxic pigment-protein from microalgae that displays antioxidant, anti-inflammatory, hepatoprotective, and neuroprotective effects. Besides these health benefits, this pigment has been utilized in dietary nourishing supplements and natural colorant applications in the food, nutraceutical, cosmetic, and biotechnology businesses.

The phycocyanin market is expected to observe an attainable high CAGR during the forecast period, i.e., 2020-2028. The market is segmented by nature, form, grade, and applications. Among product form, the powder segment is expected to hold the largest market share. The powder form is highly effective and offer great ease of digestion in comparison to other forms. The form permits effective nutrient distribution, offers high flexibility with dosing, and is economically reasonable which is expected to have a major impact on the market growth. By product applications, the food & beverage segment is expected to register the leading position in the global market among others owing to wide applications of phycocyanin, consumer demand as it’s a clean ingredient, growing interest among the vegan population, and raising awareness about a natural lifestyle. The nutraceuticals segment in the application category is expected to grow at the fastest pace owing to several benefits particularly muscle enhancement. 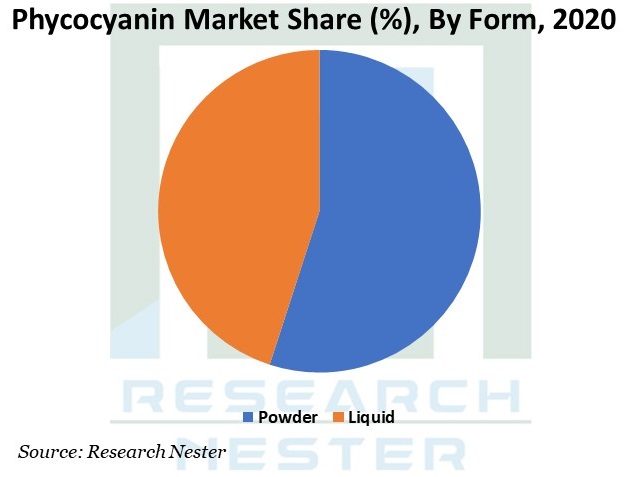 The food industry is undergoing a paradigm shift in consumer preferences, from artificial ingredients to natural ingredients. This changing trend has triggered the production of phycocyanin, which acts as a nutritious protein-pigment complex in several food and beverage applications. Its antioxidant and anti-inflammatory properties are increasingly gaining consumer attention as far as food supplements are concerned. CLICK TO DOWNLOAD SAMPLE REPORT

As the food & beverage industry is quickly growing, manufacturers are snowballing the production of indoor-grown, high-quality, and pure phycocyanin. To attain this, they are growing their spirulina algae in customized production facilities to extract five times more algae as equated to phycocyanin extracted from open pond systems, which also works as a cost-effective decision for them.

With an increase in veganism, the demand for animal-derived ingredients and products has been dwindling. Consequently, plant-based alternative solutions have been established and are relishing improved market demand.

According to the National Center for Biotechnology Information, the U.S. National Library of Medicine, phycocyanin can have a strong potential as a drug in a wider range of clinical applications. It shows a wide variety of pharmacological effects, with anti-oxidation, anti-cancer, anti-inflammatory action, photo-induced cytotoxicity, and stimulating the immune system.

Phycocyanin is also utilized in medicine to assist selective destruction of atherosclerotic plaques or cancer cells by radiation with a minute or no harm to the nearby cells or tissue.

Phycocyanin is a natural compound that is highly effective against asthma. It also hinders the production of molecules responsible for inflammation by restraining the amount of these molecules released and consequently preventing their effects in allergic events.

The product also forms a significant part of the nutraceuticals industry on account of the presence of several nutrients, antioxidants, and muscle-enhancing properties in it.

Further, it has been prevailing in the cosmetics industry, as it is non-toxic and non-carcinogenic. Since phycocyanin offers more stability as compared to other natural blue colorants, sponsors in the food & beverage landscape are progressively consuming this pigment for alcoholic beverages.

The extraordinary demand for phycocyanin has generated a shortage in the marketplace. Extracting phycocyanin from open pond systems obliges as an easy and suitable option for manufacturers. However, these pond systems are disposed to high possibilities of contamination. Hence, manufacturers are implementing the cost-competitive method of growing their spirulina algae to make sure the year-round supply of phycocyanin. Also, the product is exceptionally temperature-sensitive, and varied fluctuations in environmental conditions can considerably affect the quality of the product.

Furthermore, other constraints such as the contamination in phycocyanin negatively impacting the production process and continuous variations in the import and export of phycocyanin are affecting the growth of the global phycocyanin market.

Our in-depth analysis of the phycocyanin market includes the following segments:

North America, driven by Canada, Mexico, and the U.S., is estimated to register significant growth in the global phycocyanin market over the forecast period. The growth is attributed to growing consumer preferences towards the usage of natural colorants in cosmetics due to their high quality & eco-friendly nature, which has urged manufacturers to develop organic cosmetics which is the major motivating factor for the market growth. Increasing standards of living and numerous key players housed in the region is also a massive driving force for the region’s growth.

European market demand, driven by Germany, UK, France, Italy, and Spain, is anticipated to hold the largest market share in the forecast period owing to many factors. The vast demand for healthy food & beverages in the region, increasing food safety concerns, strict government regulations triggering the adoption of natural ingredients in food products, growing consumer inclination towards clean label products owing to rising awareness towards the use of synthetic ingredients, are the major factors that might boost regional growth.

Asia Pacific market for phycocyanin, driven by China, India, Japan, and South Korea is projected to witness remarkable growth during the projected timeframe on account of the increasing infiltration of the pharmaceutical industry in the region. Noteworthy growth in research & development activities and favorable government policies has enabled the use of phycocyanin in therapeutic drugs owing to its anti-cancer and immune enhancement properties. The growing prevalence of several lifestyle diseases and growing consumer expenditure on healthcare is expected to induce regional growth.

Furthermore, the government of many nations such as India, Angola, and Ghana is actively supportive the local spirulina market and constructing a strong gateway for the growth of this super-food which can transform the course of the food industry.

The phycocyanin market is further classified based on region as follows: