The global photonic crystal fiber (PCF) market is estimated to garner a revenue of USD 109.5 Million by the end of 2030 by growing at a CAGR of 3.8% over the forecast period, i.e., 2021 – 2030. Moreover, in the year 2020, the market registered a revenue of USD 76.2 Million. The growth of the market can primarily be attributed to growing telecommunications industry worldwide and the increasing installations of cellular network towers, backed by the growing internet penetration and the rise in the adoption of smartphones globally. According to the statistics by the International Telecommunication Union (ITU), by the end of 2019, an estimated 4 Billion people, which represented close to 51% of the global population, were known to use the internet. PCFs are widely being used as connectivity cables between the various devices used in the telecommunication industry. With the growing investment in the telecom sector worldwide, along with the rise in the number of connected IoT devices, which is estimated to reach close to 25 Billion by the end of 2030, up from around 8 Billion in the year 2019, are some of the major factors estimated to contribute to the market growth in the coming years. 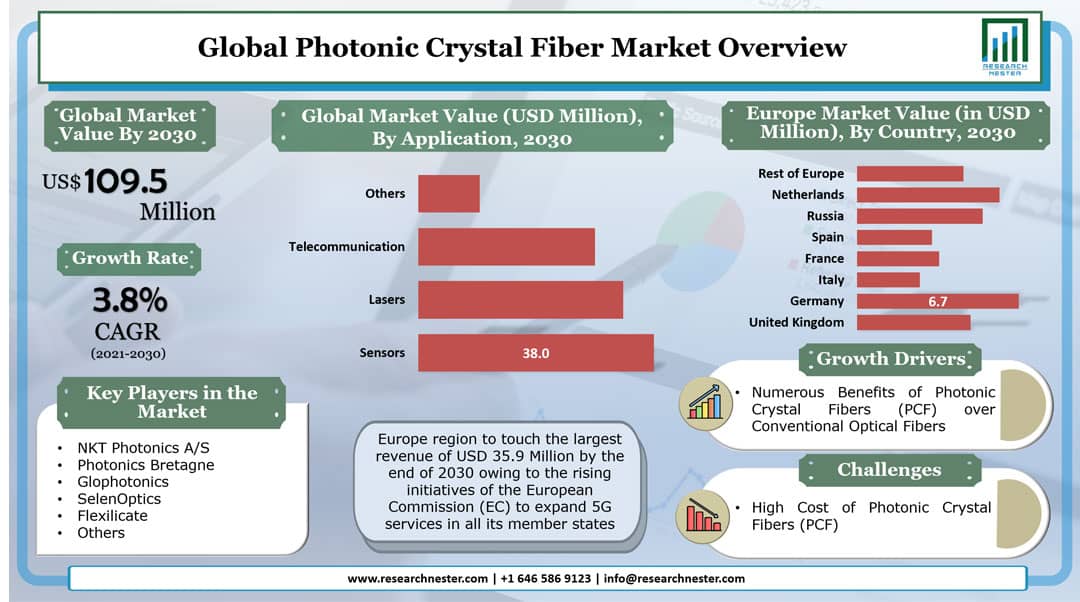 Additionally, the increasing adoption of 5G technology, along with the numerous benefits associated with the use of PFCs instead of conventional optical fibers are also expected to boost the market growth in the coming years. 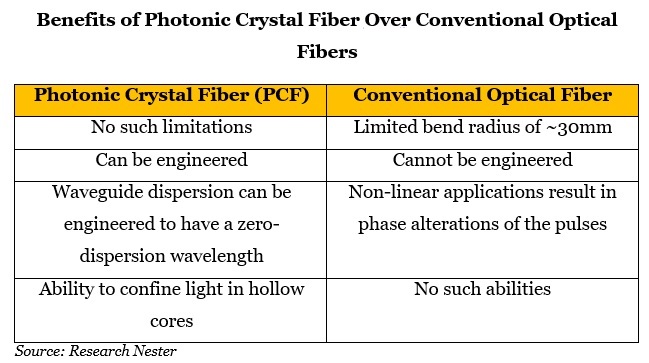 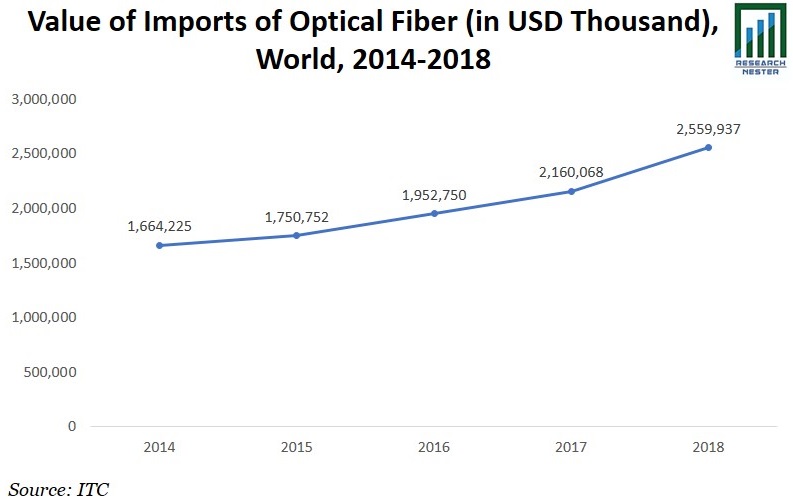 Regionally, the global photonic crystal fiber (PCF) market is segmented into five major regions including North America, Europe, Asia Pacific, Latin America and Middle East & Africa region. The market in Europe region is anticipated to garner the largest revenue of USD 35.9 Million by the end of 2030, up from a revenue of USD 26.0 Million in the year 2020. The market in the region is further expected to grow with a CAGR of 3.4% during the forecast period. The growth of the market in the region can be attributed to the availability of numerous market players who are working privately or through public-private partnership to advance in the field of photonics and photonic crystal fibers. Besides this, the growing supporting initiatives of the European Commission (EC) to launch at least one 5G network in every member state by the end of 2020, is also expected to contribute to the market growth in the coming years. 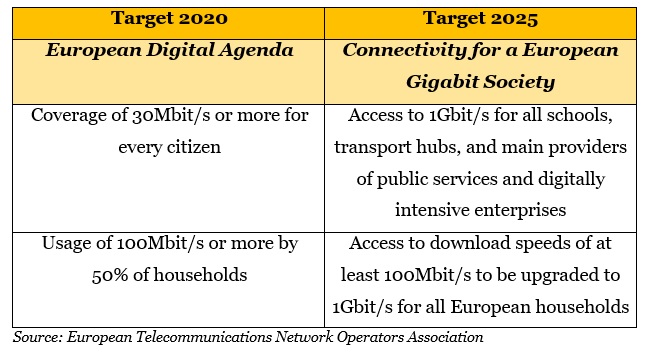 The market in the region is further segmented by country into the United Kingdom, Germany, Italy, France, Spain, Russia, Netherlands, and the Rest of Europe. Out of these, the market in Germany is anticipated to grow with a CAGR of 3.0% during the forecast period, and further touch a revenue of USD 6.7 Million by the end of 2030, up from a revenue of USD 5.0 Million in the year 2020.

1) What are the major factors driving the growth of the photonic crystal fiber market?

Ans: The numerous benefits of photonic crystal fibers (PCF) over conventional optical fibers, and the rising investment in the telecommunication sector, are some of the major factors anticipated to drive the market growth.

2) What would be the CAGR of photonic crystal fiber market over the forecast period?

3) What are the challenges affecting the photonic crystal fiber market growth?

Ans: The high cost of photonic crystal fiber (PCF) is one of the estimated to hamper the market growth.

4) Which region will provide more business opportunities for growth of photonic crystal fiber market in future?

Ans: The market in Europe region is anticipated to garner the largest revenue of USD 35.9 Million by the end of 2030 and display significant business opportunities.

5) Who are the major players dominating the photonic crystal fiber market?

Ans: The major players in the market are NKT Photonics A/S, Photonics Bretagne, Glophotonics, SelenOptics, Flexilicate, and others.

7) What are the segments in the photonic crystal fiber (PCF) market?

Ans: The market is segmented by core, transmission mechanism, application, end-use industry, and by region.

Ans: The sensors segment is expected to generate the largest revenue of USD 38.0 Million by the end of 2030 and display significant growth opportunities.