Pet wearable have established their importance in global market in the past few years. Pet wearable are used for tracking the real time position of pets and also provides the information about the amount of intake food. These wearable help the pet owners to maintain the health of pets. 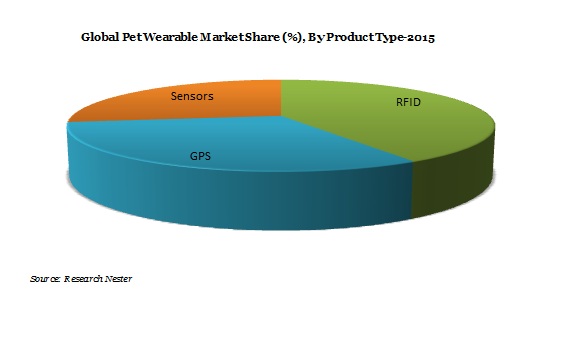 The global pet wearable market reached USD 856.2 Million in 2015 and it is estimated to garner USD 2.5 Billion by 2023 on account of rising pet ownerships in developing nations along with increasing concern towards pet care. Further, the market is expected to flourish at a CAGR of 11.8% over the forecast period i.e. 2016-2023. Geographically, Europe and North-America together accounted the major revenue share of 74.2% in 2015 of overall pet wearable market. The market of North America region is expected to continue its dominance over the forecast period and expected to register a CAGR of 10.8% over the forecast period i.e. 2016-2023 owing to increasing gross disposable income of population which will leads to higher spending on pet’s healthcare. On the other hand, Asia-Pacific region is anticipated to witness the highest growth over the forecast period on account of growing economies across the region. Rising animal expenditure, growing concern towards safety and security of pets, mandatory RFID for farm animals in Australia are some of the major factors driving the growth of pet wearable market in near future.

Features of pet wearable such as monitoring, tracking, diagnosis and controlling pets are effective and advantageous for the pet owners to monitor the activities of their pets. On account of these factors, the pet wearable market is expected to gain traction in near future.  In addition to that, rising awareness towards health and well-being of pets and introduction of stringent regulations for animal behavior in many developing nations are likely to adopt pet wearable in order to control and monitor pets. In addition to that, increased number of animal farms to meet dairy product demand, huge investment in animal healthcare and rising initiatives from government authorities to control and maintain health of animal based meat products are some of the factors exhibit the positive growth of pet wearable market in near future.

Our in-depth analysis segmented the global pet wearable market in the following segments:

Global pet wearable market is further classified on the basis of region as follows:

Rise in number of pet ownership and increasing concern towards health and well-being of animals among the owners are some of the key elements which are expected to bolster the demand for pet wearable in near future.

In addition to this, advancements in pet wearable, availability wide range of pet wearable in the marketplace, rising pet wearable preferences by pet owners, increasing gross disposable income resulting in increased spending on pets, rising concerns towards health and fitness of pets and increasing demand in developed & developing nations across the globe are some of the key elements expected to prompt the demand for pet wearable over the forecast period i.e. 2016-2023. The market of pet wearable is majorly driven by the factor such as rising penetration of smart phone users, advanced internet connectivity and spiked adoption of electronically enabled medical diagnosis and treatment devices to maintain pets’ fitness. Rising consciousness towards safety & security, medical diagnosis and behavior monitoring is likely to bolster the demand for pet wearable across the globe over the forecast period i.e. 2016-2023.

However, high cost of wireless pet wearable, short battery life, stringent regulations from government authorities, lack of awareness towards pet wearable in undeveloped nations and high capital cost of equipment which increase the cost of services are some of the factors likely to inhibit the growth of pet wearable market in near future.

The key vendors of pet wearable market are as follows: