The patient temperature management market for cooling systems is segmented on the basis of region into North America, Europe, Asia Pacific, Latin America and Middle East & Africa. The market in North America held the largest share of 37.73% in 2018 owing to increasing investments in medical devices by manufacturers in the region along with rising healthcare expenditure by people in countries such as the U.S. and Canada. The market in Asia Pacific is estimated to reach a market value of USD 419.73 Million by the end of 2027. The market growth in this region is primarily led by the production in China on account of growing availability of advanced technologies in the healthcare industry as well as the rising incidences of heart diseases, neurological disorders and orthopedic surgeries among the elderly population. As a result of this, the demand for patient temperature management for cooling systems has significantly risen in the Asia Pacific region. 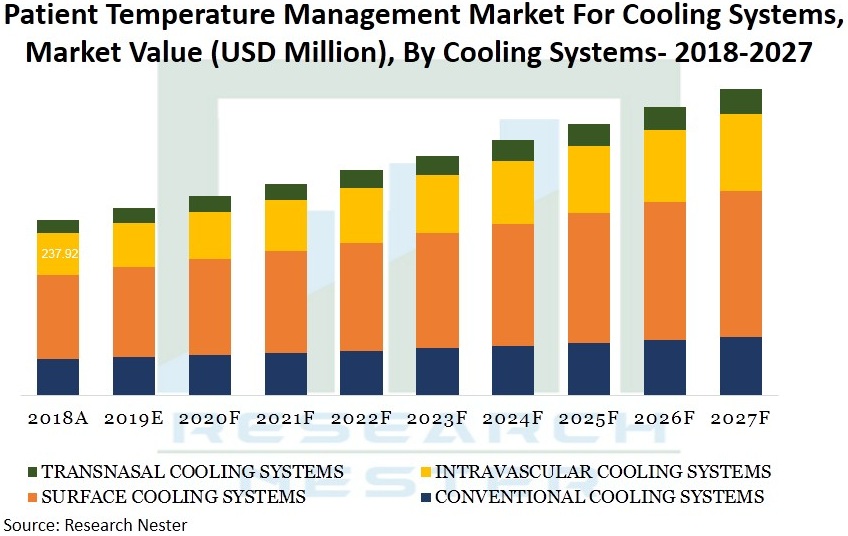 The components segment in the market is further segmented into water blankets, cooling caps, gel pads, cooling catheters and others, out of which, the cooling catheters segment witnessed the highest growth as a result of increasing applications of these catheters in various types of cooling systems. In the year 2018, the segment for cooling catheters was estimated to record a market value of USD 311.68 million. Cooling catheters are inserted into the femoral vein to circulate the cooling solution in order to reduce the patient’s blood temperature. The component provides various benefits as it can be used in cases of emergency such as to regain consciousness or help patients undergoing major heart or brain damage.

On the basis of application, the market is segmented into cardiology, neurology, orthopedics, pediatric and others. The segment for cardiology is predicted to gain a significant market value in the coming years on the back of growing rates of heart diseases such as cardiac arrests, strokes and myocardial infarction. According to the World Health Organization, around 32.4 million myocardial infarctions and strokes occur around the world on a yearly basis. This is estimated to increase further, thereby boosting the market demand over the forecast period. 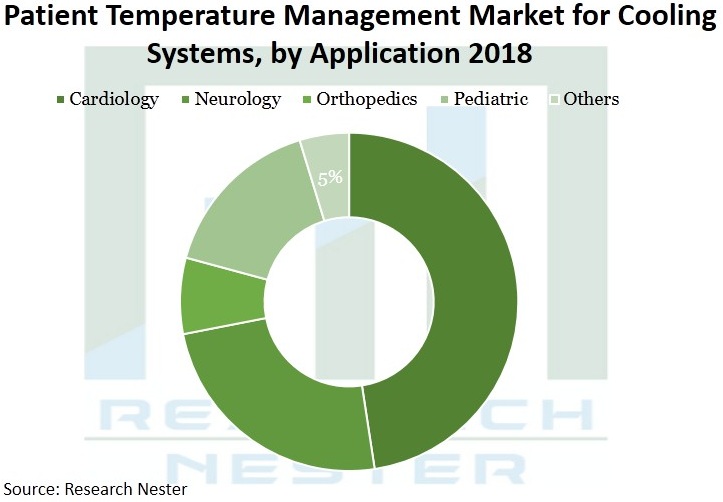 The market for temperature management market for cooling systems is segmented on the basis of end user into hospitals, ambulatory surgical centers and clinics. All over the world, there is a higher patient influx in hospitals as compared to other healthcare facilities. This increases the usage of cooling systems in the form of water blankets, gel pads and others. Moreover, the large number of specialties at hospitals that provide comprehensive treatment solutions indicates the high demand for these systems for patient temperature management. On the basis of these factors the hospitals segment is anticipated to continue to lead the market with the highest share. However, the segment for ambulatory surgical centers (ASCs) is projected to grow at the highest rate over the forecast period on account of increasing usage of cooling systems for post-surgical pain management and proper circulation of blood in the body. Additionally, ASCs contain more technology advanced treatments as compared to hospitals as a result of which the cooling systems for temperature management will be increasingly adopted by them.

Growing incidences of cardiovascular disease, neurological disorders, orthopedic surgeries and other disorders that require the application of patient cooling temperature systems is a major factor estimated to drive the market growth in the upcoming years. These medical devices are suitable for both adults and children, as a result of which they can be used by a wider range of population. The new innovations and technological advancements in the industry is another factor anticipated to boost the market growth of patient temperature management devices for cooling systems. The growing adoption of innovative technologies in neonatal care, trauma care and intensive care units has led to the increasing demand for cooling devices. Further, the favorable patient reimbursement policies by the government to reduce the gap between government-covered expenses and out-of-pocket expenses is predicted to result in the rise in adoption of new and improved medical products.

The market for patient temperature management for cooling systems is estimated to face a number of challenges which might hamper the market growth over the years. The high cost associated with the cooling systems along with their limited implementation in developing and underdeveloped regions are predicted to be some major growth restricting factors for the market. Additionally, the stringent manufacturing regulations have made the approval process of these devices exhaustive which is estimated to impact the market negatively during the forecast period.