A switchgear consists of disconnect switches, fuses and circuit breakers which are used for the isolation of an electrical equipment. They are used to clear faults and to de-energize electrical equipment in case repair work is to be carried out. During earlier times, switchgear was mounted on insulated panels of asbestos or marble. By the beginning of the early twentieth century, oil based switchgear were largely replaced with air-blast or vacuum which allows large electric currents to be automated. Pad-mounted switchgear is ground mounted on a concrete pad inside a locked steel cabinet.

Over the years, investments in electrical transmission and their distribution have increased. City planning has compelled the planners to focus on underground distribution systems. Owing to these factors, the pad-mounted switchgear market is expected to attain a significant CAGR during the forecast period 2020-2028. The market is segmented by application into industrial, commercial, residential and others. The industrial segment is anticipated to grow at the highest rate on the back of high demand for uninterrupted power supply in industrial operations across the world. CLICK TO DOWNLOAD SAMPLE REPORT 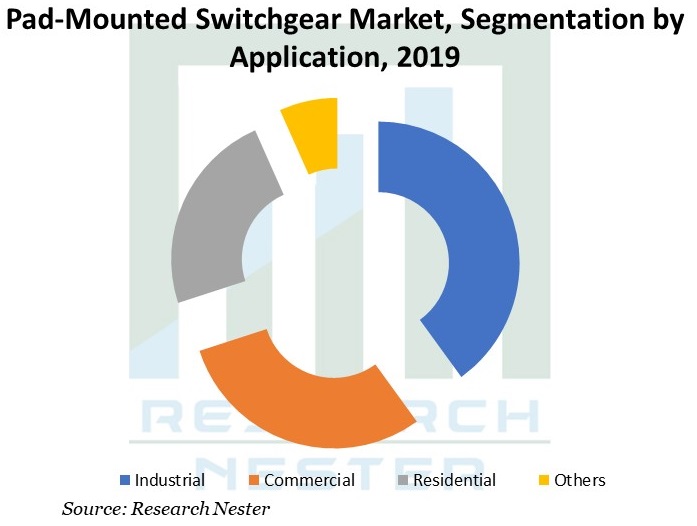 Rising industrialization in the low and middle income countries is expected to boost the demand for uninterrupted power supply and thus drive the demand for pad-mounted switchgear. The market is anticipated to witness a significant growth on the back of these features during the forecast period. Automation of the power infrastructure and prevalence of underground distribution network is anticipated to drive the market growth further.

Solid dielectric pad-mounted switchgear uses epoxy for insulation which is considered as an extremely essential component in gas-induced switchgear to reduce the emission of greenhouse gases. This is anticipated to drive the market growth during the forecast period. With low and middle income countries going through a phase of urbanization, rapid residential and commercial building activities are taking place at a much higher rate than before, which is another factor estimated to contribute towards the market growth over the next few years.

As a result of rise in the key players dominating the market, the intense competition may squeeze the profit margins forcing the mid-scale companies to adopt different strategies. It is therefore, predicted to negatively impact the market growth during the forecast period. High cost associated with pad-mounted switchgear along with aging infrastructure and challenging interchangeability with the existing electric distribution systems are estimated to be other growth restricting factors for the market during the forecast period.

Our in-depth analysis of the pad-mounted switchgear market includes the following segments:

On the basis of regional analysis, the pad-mounted switchgear market is segmented into five major regions including North America, Europe, Asia Pacific, Latin America and Middle East & Africa region out of which, the market in North America is anticipated to hold the largest market share on the back of high investments in the pad-mounted switchgear technology in the region. Moreover, the market in Europe is anticipated to record the highest CAGR on the back of rapid upgradation of transmission systems in the region.

The global pad-mounted switchgear market is further classified on the basis of regions as follows: