Introduction to Over the Air Testing

The global over the air testing (OTA) market is expected to expand at a CAGR of 10.30% over the forecast period i.e. 2019-2027. The growth of OTA testing market is driven by advancement in technology such as 5G, IoT and automation. With increased penetration of internet of things (IoT) and machine to machine (M2M) devices, the global over-the-air (OTA) testing market is expected to grow significantly in upcoming years. Additionally, the trend of smart cities in countries like India is expected to drive the demand for OTA testing. Smart cities would have a far more connected physical infrastructure as compared to conventional cities, thereby raising the need for OTA testing. Rising initiatives for the development of smart homes is one of the notable factors that are driving the growth of the OTA testing market.

Increase In Penetration Of Iot And Smart Devices

It is mandatory for companies to comply with OTA testing to get the Cellular Telecommunications and Internet Association (CTIA) certification.  In addition, it is a requirement for various carriers, vendors, and standard organizations to determine if wireless devices meet the prescribed standards. With the increase in IoT and adoption of smart devices, the demand for OTA testing is expected to increase, which would further drive the growth of the OTA testing market. Moreover, smart devices, such as fitness wearable, medical devices, and numerous mobile devices, connected with the help of Wi-Fi, Bluetooth, and other wireless devices are fueling the market growth of OTA testing. Furthermore, testing for IoT and smart devices has increased owing to emerging standards and different wireless technologies that are used to connect the devices. These factors are significantly driving the growth of the OTA testing industry.

The rate of urbanization worldwide has been increasing at a rapid pace and is progressing towards adopting smart cities. Smart cities are estimated to significantly increase the number of wireless and smart connected devices. This significant increase would lead to rise in OTA testing of wireless devices in order to meet the industry standards and facilitate assessment of antennas and receiver performance. OTA testing is done to check the reliability and accessibility of wireless devices. Therefore, the mandatory regulations by cellular and numerous telecommunication associations to use OTA testing for wireless devices is estimated to support the growth of the market.

North America holds the largest market share in OTA testing market and highest growth rate in this industry is predicted to be witnessed by the market in Asia-Pacific region, followed by Europe. High rate of urbanization and strong economic growth in APAC region is creating an intrinsic demand for faster implementation of services. This efficiency is brought by more connected physical devices that need massive testing before their implementation. Additionally, massive investments by both government and private entities related to the implementation of IoT and machine-to-machine communication in the infrastructure sector in Japan, China, India, and South Korea is seen as the major reason behind the market’s growth. Additionally, the APAC region is registering the highest use of telecommunication devices like laptops, tablets, and smartphones. Increased government spending on IoT is expected to drive market growth in North America, whereas in Europe, the creation of the Alliance for Internet of Things Innovation (AIOTI) by the European Commission is estimated to contribute to the growth of the market in Europe region. 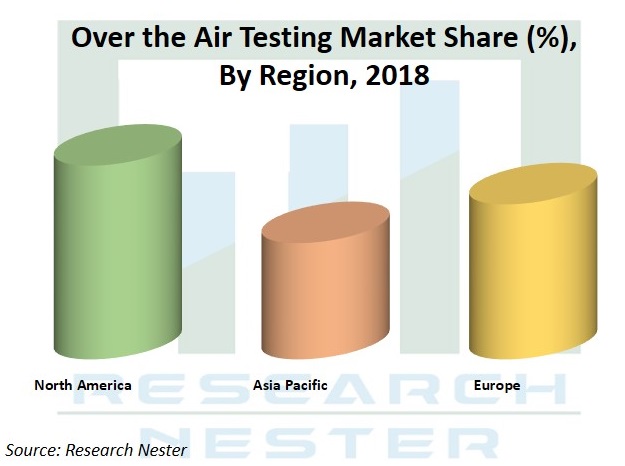 The global over-the-air (OTA) testing market is further classified on the basis of region as follows: